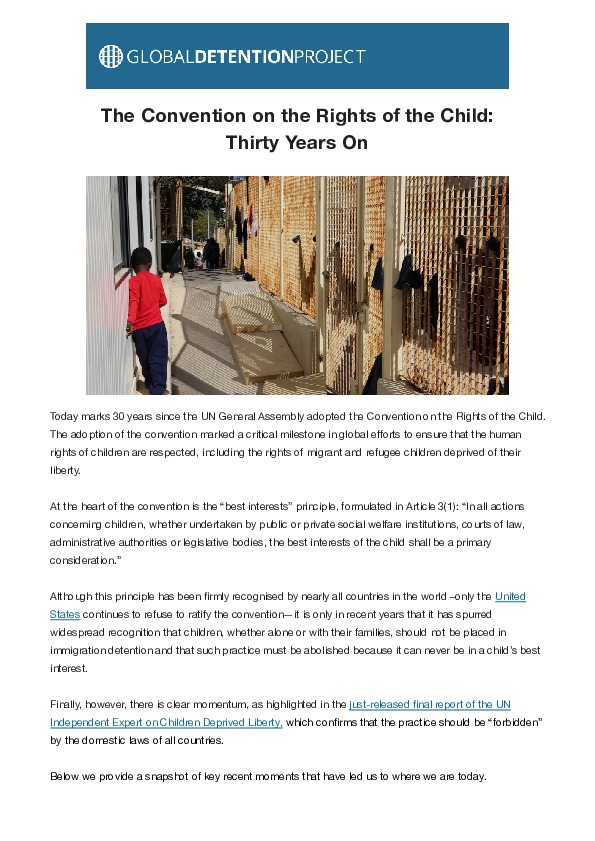 Today marks 30 years since the UN General Assembly adopted the Convention on the Rights of the Child. The adoption of the convention marked a critical milestone in global efforts to ensure that the human rights of children are respected, including the rights of migrant and refugee children deprived of their liberty.

At the heart of the convention is the “best interests” principle, formulated in Article 3(1): “In all actions concerning children, whether undertaken by public or private social welfare institutions, courts of law, administrative authorities or legislative bodies, the best interests of the child shall be a primary consideration.”

Although this principle has been firmly recognised by nearly all countries in the world –only the United States continues to refuse to ratify the convention—it is only in recent years that it has spurred widespread recognition that children, whether alone or with their families, should not be placed in immigration detention and that such practice must be abolished because it can never be in a child’s best interest.

Finally, however, there is clear momentum, as highlighted in the just-released final report of the UN Independent Expert on Children Deprived Liberty, which confirms that the practice should be “forbidden” by the domestic laws of all countries.

Below we provide a snapshot of key recent moments that have led us to where we are today.

2011: “No detention of unaccompanied children on migration grounds should be allowed.” Council of Europe, Parliamentary Assembly

2012: “Detention of a child because of their or their parent’s migration status constitutes a child rights violation.” Committee on the Rights of the Child

2017: “Child and family immigration detention should be prohibited by law and its abolishment ensured in policy and practice.” CRC and CMW Joint General Comment

2018: “Protect and respect the rights and best interests of the child at all times … [including] by working to end the practice of child detention in the context of international migration.” Global Compact for Safe, Orderly, and Regular Migration

2018: “The deprivation of liberty of an asylum-seeking, refugee, stateless or migrant child, including unaccompanied or separated children, is prohibited.” UN Working Group on Arbitrary Detention’s Revised Deliberation No. 5

2019: “Since migration-related detention of children cannot be considered as a measure of last resort (as required by Article 37(b) CRC) and is never in the best interests of the child (Article 3 CRC), it is prohibited under international law and should, therefore, be forbidden by domestic law.” United Nations Global Study on Children Deprived of Liberty

Despite the clear trend in authoritative law and opinion regarding the necessity of prohibiting child immigration detention, the sad truth is that children continue to be detained in countless countries across the globe in conditions that are manifestly inadequate to meet their needs as children. Unaccompanied children are sometimes held alongside adults. Children detained with their parents are not granted accommodation that respects family privacy. Children often do not have access to education and play areas are non-existent or poorly equipped. In some cases, children are exposed to extreme abuse and violence.

Compounding these problems is the fact that many of these children are invisible, detained in facilities that are misleadingly named—such as “hotspots” in Greece and Italy, “depots” in Malaysia, and “specialised homes for temporary accommodation” in Bulgaria —and not accounted in official statistics or reports. A lack of data on the numbers of children in detention, in addition to the lengthy time they can spend in detention, results in children falling “into a statistical vacuum, with numbers of these children potentially ranging anywhere from the tens of thousands to the millions,” as the UN Deputy Secretary-General has said.

Children are severely impacted by restrictive border policies, which are sometimes carried out with deadly force. As our most recent report on Turkey noted, children have been among the hundreds of Syrians killed by Turkish border guards while attempting to cross into Turkey over the past year, while children and their families have been unlawfully expelled back to Syria for many years.

So where do we go from here? One place to look for guidance is the newly published Global Study on Children Deprived of Liberty. The study is the result of years of work by the UN Independent Expert on Children Deprived of Liberty, Manfred Nowak—with assistance provided by numerous external advisers and experts, including staff members of the GDP—to evaluate all forms of deprivation of liberty of children, including children in migration-related situations. Among the study’s recommendations concerning migration detention:

Remarkably, although the UN-mandated Independent Expert issued questionnaires to all countries asking for details about and data on children in all forms of detention, only 92 countries responded, and only 42 countries answered questions concerning the migration-related detention of children. Based on these answers as well as information provided by numerous other experts and independent sources, the Global Study concludes that no fewer than “80 countries around the world deprive children of their liberty for migration purposes.”

Clearly, for advocates working to protect the human rights of children, we have our work cut out. The Global Study has helped us define a path forward.