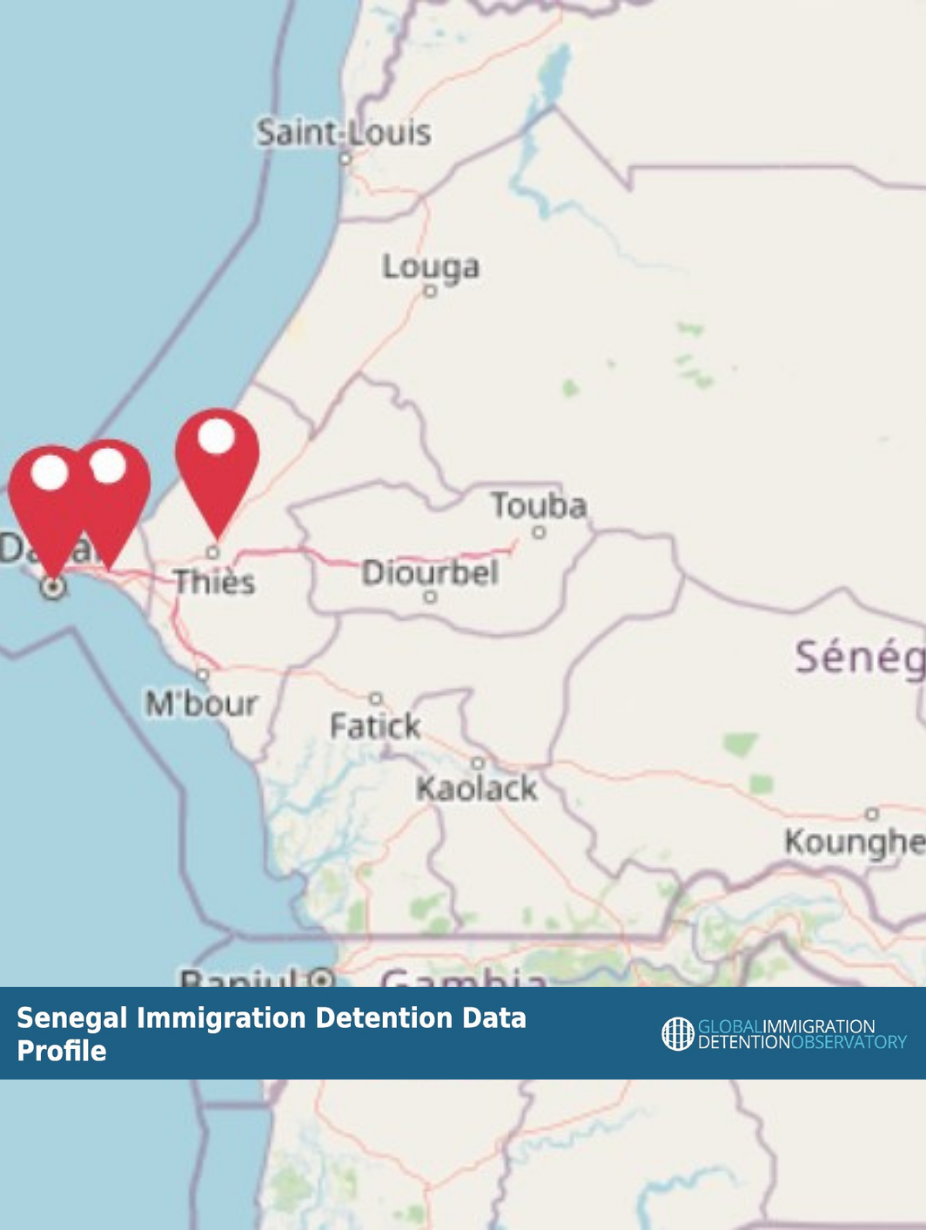 A major migrant source country, Senegal is also a destination and transit country for migrants and asylum seekers, many of whom attempt to use Senegal as a departure point for Spain’s Canary Islands. In recent years, Senegal has passed legislation and signed agreements with European countries aimed at preventing “clandestine” emigration from the country. Rights advocates claim that these efforts have resulted in increasing numbers of migration detainees in Senegal.

Europe: On Its Borders New Problems

A member of the Senegalese graffiti collective "RBS CREW" paints an informational mural advising how to stop the spread of coronavirus: Human Rights Watch, "Waiting for the Storm: The Coronavirus in Africa," 3 April 2020, https://www.hrw.org/news/2020/04/03/waiting-storm-coronavirus-africa

Senegal does not operate a dedicated immigration detention facility, according to information provided by the country’s Ombudsperson (Senegal’s Human Rights Committee, or SHRC). However, SHRC informed the GDP that a network of NGOs has launched a campaign to protect the rights of refugees, asylum seekers, and any other displaced persons during the pandemic. The coalition--which is made up of the Pan-African NGO for Sustainable Development Education, the Senegalese Social Forum, and partners from the Migration and Development Network--seeks to provide refugees and asylum seekers with food and hygiene products, and to encourage decision makers to take into account the rights of migrants and refugees in all response and resilience plans throughout the pandemic.

According to UNHCR, in 2019 there were 37,554 people of concern within the country. Although Senegalese law provides for the granting of asylum or refugee status, the country’s President must approve each case causing delays of many years. Moreover according to refugee advocates, the government rarely grants refugee status or asylum, but generally allows those with pending applications, and some who have been rejected, to remain in the country. According to the U.S State Department (2019), “Police did not arrest denied asylum seekers for staying illegally in the country. Police did arrest asylum seekers if they committed crimes, but authorities generally contacted UNHCR in such cases to verify their asylum status and ensure they deported no one with a pending claim.”

A major migrant source country, Senegal is also a destination and transit country for migrants and asylum seekers, many of whom attempt to use Senegal as a departure point for Spain’s Canary Islands. In recent years, Senegal has passed legislation and signed agreements with European countries aimed at preventing “clandestine” emigration from the country. Rights advocates claim that these efforts have resulted in increasing numbers of migration detainees in Senegal. Said one source interviewed by the Global Detention Project, “The border of Europe has been pushed back to Senegal. And with these increasing crackdowns, there is no guarantee for refugees who are caught up in mixed migrant flows” (Ndiaye 2009).

According to the Foreigners Act, a non-citizen (étranger) is subject to imprisonment and a fine if he/she:
• Enters or returns to Senegal despite being notified that he/she is not allowed to do so;
• Remains in Senegal without appropriate authorization or after the expiration of authorization;
• Obtains residence authorization by fraudulent means;
• Works illegally in Senegal.

Senegal is a party to the 1951 Refugee Convention and has established legal criteria for the recognition and treatment of refugees and asylum seekers. These are set out in the 1968 Refugee Law as well as successive modifications (USCRI 2007). Governmental and non-governmental bodies generally applaud Senegal’s policies on refugees, reporting few or no cases of refoulement and highlighting the country’s protection system (U.S. State Department 2009; USCRI 2007).

The Global Detention Project has received contradictory information regarding Senegal’s detention practices. According to both the U.S. State Department and the U.S. Committee for Refugees and Immigrants (USCRI), undocumented immigrants can be held in administrative detention for up to three months while they await deportation (USCRI 2008; U.S. State Department 2009).

However, the Global Detention Project was unable to verify the law or regulation that stipulates the 3-month administration detention policy. A representative of the West African aid agency OFADEC, which works closely with refugees, told the Global Detention Project that he was unaware of the 3-month detention policy. He added, “The Senegalese government does not have the money or resources to keep immigrants in jail. Those arrested [because of their status] are typically released on bail after sentencing. Many of these people are linked up with trafficking rings, and as soon as they are freed they link back up with their networks and you never see them again” (Ndiaye 2009).

In its World Refugee Survey 2007, USCRI highlighted a number of detention cases, including the detention of refugees: “Authorities arrested at least six West and Central Africans for lack of valid papers. In April, authorities detained an Ivorian refugee overnight even though he had an attestation of refugee status. In August, authorities arrested two Liberians for illegal residence, held them for three weeks, and sentenced them to a month in prison. The Liberians had applied for asylum four months earlier, but the [National Commission for Eligibility] had not given them receipts. Authorities could hold persons in administrative detention for up to three months before deportation. No court reviewed refugees' or asylum seekers' detention. Generally, authorities informed UNHCR of arrests and, when necessary, UNHCR intervened to assure release” (USCRI 2008).

According to the U.S. State Department, in 2008 the Senegalese government “violated the rights of some asylum seekers by not offering them due process or security since appeals filed by denied asylum seekers were examined by the same committee that examined their original cases, and a denied asylum seeker can be arrested for staying illegally in the country. Those arrested sometimes remained in ‘administrative detention’ for up to three months before being deported” (U.S. State Department 2009).

Because of its status as a transit state for migrants trying to reach Europe, Senegal has passed legislation and worked closely with European partners to impede the trafficking of immigrants across its territory. The Law against the Trafficking in People, passed in 2005, has been widely applauded for its stringent penalties aimed at people traffickers (see, for example, U.S. State Department 2009b). However, the law broadly targets all those involved in “clandestine migration.” Article 4 of the law provides, “Illegal migration, organized by land, sea or air, as well as the use of national territory for origin, transit or destination, is punishable by 5-10 years imprisonment.” According to one rights advocate in Senegal, enforcement of this law has led to increases in the numbers of people, including both Senegalese and non-citizens, detained and prosecuted for migration-related offenses (Sadikh 2009).

Since passage of the 2005 anti-trafficking law, Senegal has signed a number of bilateral agreements with European countries, including Spain and France, aimed at cooperating in efforts to prevent “clandestine” emigration from Senegal and/or allowing for the repatriation of unauthorized immigrants (AFP 2008; Bernard 2006; Euronews 2006). According to rights groups, however, these agreements risk violating basic rights and have led to increased numbers of detainees. Amnesty International reported in 2007, “Thousands of migrants and asylum-seekers, mostly sub-Saharan Africans, continued to transit through Senegal. Many sought to reach the Canary Islands (Spain) and hundreds were arrested by Senegalese security forces. Coastal surveillance was reinforced after an agreement in August between Senegal and Spain to implement joint security measures to curb the flow of clandestine migrants. In September and October [2006], more than 90 Pakistani migrants, including at least one minor, were arrested, charged with attempted illegal immigration and repatriated” (AI 2007).

Human Rights Watch (HRW) has criticized a 2006 agreement between Spain and Senegal on the repatriation of unaccompanied children on the grounds that it provides too little time (20 days) to adequately assess situations. The group added, “The deadlines also increase the risk that information will be shared with the Senegalese government before an assessment is made whether a child or his or her family are subject to persecution and have a claim for protection under the Refugee Convention. Under these circumstances, sharing such information could conceivably place the child or the child's family at additional risk of persecution” (HRW 2008).

Senegal does not maintain dedicated facilities to hold immigration detainees in administrative detention. Instead, Senegal uses prisons and police stations to hold these detainees (Ministry of Interior 2009b; Sadikh 2009). According to one advocate who works with detained immigrants, the principal prisons used for this purpose include: Prison Centrale (aka “100 metres”), Liberte VI (for women), and Fort-B (for minors) in Dakar; and the prisons in Rufisque, Theis, and Saint-Louis (Sadikh 2009). Prisons are managed by the Direction de l'Administration Pénitentiaire of the Ministry of Justice (International Centre for Prison Studies 2008). Immigration detainees are under the authority of the Direction de la Police des Etrangers et des Titres de Voyage of the Ministry of Interior (Ministry of Interior 2009).

As of 2007, Senegal had 2,538 pending asylum claims and was home to more than 20,000 certified refugees (UNHCR 2008). The majority of refugees and asylum seekers in Senegal come from Mauritania. Others come from Guinea Bisseau, Rwanda, Liberia, Sierra Leone, and Cote d’Ivoire (USCRI 2007).

Recommendation Year
Committee on Migrant Workers "§27. (a) amend act no. 71-10 of 25 january 1971 on conditions of admission, stay and establishment of foreigners in senegal so as to decriminalize irregular migration, since the committee is of the view that, in accordance with its general comment no. 2 (2013) on the rights of migrant workers in an irregular situation and members of their families, staying in a country in an unauthorized manner or without proper documentation or overstaying a residence permit should not constitute a criminal offence; (b) indicate in its next periodic report the number of migrants, disaggregated by age, sex, nationality and/or origin, who are currently being detained for having violated the law on migration, specifying the location, the average length and conditions of detention and providing information on the number of expulsions and the procedures followed; (c) detain migrant workers for having violated the law on migration only in exceptional circumstances and as a last resort; and ensure in all cases that they are held separately from ordinary prisoners, that women are detained separately from men, that conditions of detention are in conformity with international standards and that alternatives to detention are used for children and their families and for unaccompanied minors; (d) prohibit and consider alternatives to the administrative detention in police stations of foreigners awaiting deportation from the national territory." "§31. (a) facilitate access by senegalese migrant workers residing abroad to consular and diplomatic assistance from the state party, particularly in cases of detention or expulsion; (b) ensure that its consular services effectively carry out their duty to protect and promote the rights of senegalese migrant workers and members of their families and, in particular, provide the necessary assistance to any such persons who are deprived of liberty or subject to an expulsion order; (c) take the necessary steps to ensure that the consular or diplomatic staff of the states of origin or of a state representing the interests of those states are systematically informed when one of their nationals is taken into custody in the state party." 2016
2016
Committee on Migrant Workers " take the necessary steps to ensure that the detention of migrant workers in an irregular situation is only a measure of last resort and that, in all circumstances, such detention is carried out in accordance with article 16 and with article 17, paragraph 2, of the convention." 2010
2010

Ministry of the Interior (French), http://www.interieur.gouv.sn/