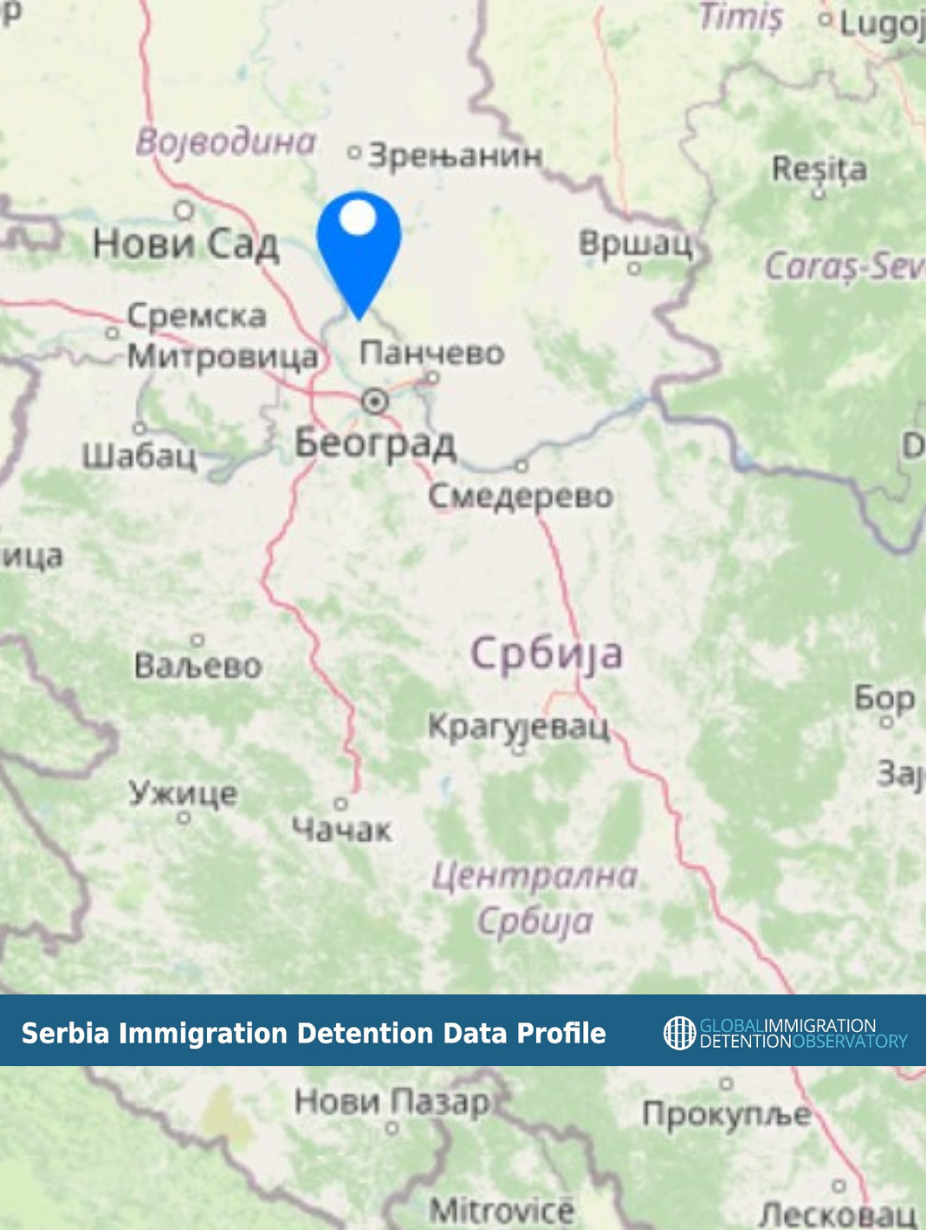 (February 2021) Serbia has been a critical country in Europe’s response to migration and refugee pressures. Located just outside the eastern boundary of the European Union, Serbia’s shared border with Hungary--an important transit point into Europe for migrants--has experienced considerable turmoil, especially after Hungary declared a “state of crisis” due to “mass immigration” in 2016 and boosted border fences and other controls. The country operates a migrant detention centre in Padinska Skela. Civil society groups say that it has been plagued by problems like lack of access to legal assistance, poor transparency and insufficient access to official data about the facility, and failure to provide detainees with non-custodial options.

Tents in Morovic Camp - originally intended to be used for quarantining Serbian nationals returning home, but now being used to deain migrants and asylum seekers, (mod.gov.rs, "BIRN Fact-check: When Did Serbia Order All Arrivals to Self-Isolate?" Balkan Insight, 8 April 2020, https://balkaninsight.com/2020/04/08/birn-fact-check-when-did-serbia-order-all-arrivals-to-self-isolate/)

Since March, all transit and asylum centres have been in lock-down. Raids of squats and informal accommodation have increased since then, with migrants and asylum seekers apprehended and transferred to camps across the country. According to the Border Violence Monitoring Network (BVMN), the government temporarily opened several “camps,” which have been quickly filled with new arrivals. These sites are in Morović, Subotica, and Miratovac. Reportedly, the facility in Morović has been used to confine overflow from other sites and “troublemakers” from facilities elsewhere. Some of these, including the tented facility in Morović - had originally been intended to be used for quarantining Serbian nationals returning home.

Despite Serbia lifting its state of emergency on 6 May, on 16 May the government announced that it would be deploying troops to “secure” and “protect” three migrant reception centres located on the country’s border with Croatia. Reportedly these three facilities - Principovac, Sid-Stanica, and Adasevci - currently confine 1,500 migrants, refugees, and asylum seekers, most of whom are from Syria, Afghanistan, and Pakistan. President Vučić reportedly told a local media outlet that the deployment was also to protect locals in the area. Since the country had begun to lift lockdown, he claimed, “the migrants started venturing outside the camps, committing petty crimes and illegal entries into houses.”

Pushbacks from Serbia into North Macedonia have continued during the crisis. In one case documented by the BVMN in early April, a group of 15 adult men and one minor in Tutin camp were informed that they were being transferred to a site in Prescevo. Crammed into a police van, they were driven for nine hours before being forced outside and, with guns pointed at them, ordered to cross into North Macedonia. The group attempted to re-enter Serbia four times, but on each occasion they were pushed back across the border.

As the GDP reported on 23 April, anti-migrant sentiment has been growing in Serbia. Since March, one of the fastest growing Facebook groups in the country is called “Stop Migrant Settlement.” Some of the group’s members have voiced their belief that authorities introduced curfews not to stem the virus’s spread, but so that they could quietly settle migrants across the country. In early May, a car was driven into a migrant centre in Obrenovac, with the driver live-streaming the attack on his Facebook page.

A group of migrants rest at the Serbian village of Kelebia, bordering Hungary (EPA-EFE/Zoltan Balogh Hungary Out/ Balkan Insight - https://balkaninsight.com/2020/04/09/movement-ban-worsens-migrants-plight-in-serbia-bosnia/

NGOs report that 6,852 migrants and asylum seekers are currently confined in the country’s 13 closed reception centres. Many had tried to cross into Croatia and Hungary - with some being forcibly pushed back by Hungarian and Croatian border police. In recent months, anti-migrant sentiment has grown in the country: a rally in Belgrade in early March called for the return of all migrants passing through Serbia and warned that participants would set up street patrols to intercept foreigners.

After the eruption of the Covid-19 crisis, Serbian authorities quickly moved to lock-down reception centres, imposing a state of quarantine on 17 March. Article 3, paragraphs 2 and 3 of the Decree on Emergency Measures provides that migrants, refugees, and asylum seekers may be deprived of their liberty on the grounds of preventing “uncontrolled movement” and the potential spread of the virus. With armed soldiers reportedly stationed outside the reception centres, migrants and asylum seekers have not been allowed out of the facilities unless they receive special permission, and rights organisations have been prevented from entering - thus denying detainees psychological, legal, or other forms of assistance.

However, with no confirmed cases amongst the non-citizen population, and with no such restrictions in place for Serbian citizens living in private accommodation, rights observers argue that this amounts to “discrimination on the basis of legal status, origin and place of residence.” The human rights NGO A11 says that the government’s quarantine of reception facilities is additionally problematic given that the collective deprivation of liberty of non-citizens has produced inhuman and degrading conditions in certain facilities due to severe overcrowding - reportedly, capacity at Sombor Transit Centre has reached 450 percent.

Provision of Healthcare in Detention Centres

Recommendation Year
Observation Date
Committee against Torture § 14. The State party should continue and intensify its efforts to facilitate access to a prompt and fair individualized asylum determination procedure in order to avoid the risk of refoulement. To this end, the State party should: (a) Ensure that the Asylum Office is supported with personnel and financial and technical resources sufficient to be able to register asylum seekers in a timely manner, promptly issue their identity cards, conduct individualized interviews with the support of interpretation services and issue refugee status decisions within a reasonable time. The State should address these deficiencies in the new draft law on asylum, including the lack of time-bound obligations; (b) Establish and ensure the implementation of a standardized and accessible asylum and referral procedure in international airports and transit zones; (c) Guarantee access to independent, qualified and free-of-charge legal assistance and interpretation services for asylum seekers throughout the asylum procedure, as well as in misdemeanour proceedings and when they are detained at the airport, in order to enable them to challenge the lawfulness of their deportation and detention orders. 2015
2015
Committee on the Rights of the Child 57. In the light of general comment No. 6 (2005) on treatment of unaccompanied and separated children outside their country of origin, the Committee recommends that the State party: (a) Establish fair and efficient asylum procedures that are to be carried out in a child-sensitive manner, in both procedural and substantive aspects, and that can be used to systematically identify and refer unaccompanied or separated children for appropriate protection and support, and consider amending relevant national legislation, including the Law on asylum, in this regard; (b) Ensure the full inclusion of asylum-seeking and refugee children who are unaccompanied or separated in the existing child protection system, provide accommodation in foster families or other accommodation facilities adequate for their age, gender and needs in line with best interest assessments conducted on an individual basis and establish specialized services for children with emotional, psychiatric and behavioural problems; (c) Ensure that all asylum-seeking children are systematically provided with information on their rights and obligations, asylum procedures and available services to prevent them from resorting to sleeping without shelter for fear of deportation, and take the steps necessary to protect unaccompanied children from smuggling rings; (d) Ensure full respect for the principle of non-refoulement and facilitate access to the asylum system for children in need of international protection in line with articles 6, 22 and 37 of the Convention; (e) Guarantee the right to acquire Serbian citizenship for all children currently residing in the State party who would otherwise be stateless, regardless of their own, or their parents’, legal status." 2017
2017

A11 Initiative for Economic and Social Rights https://www.a11initiative.org/en/home/