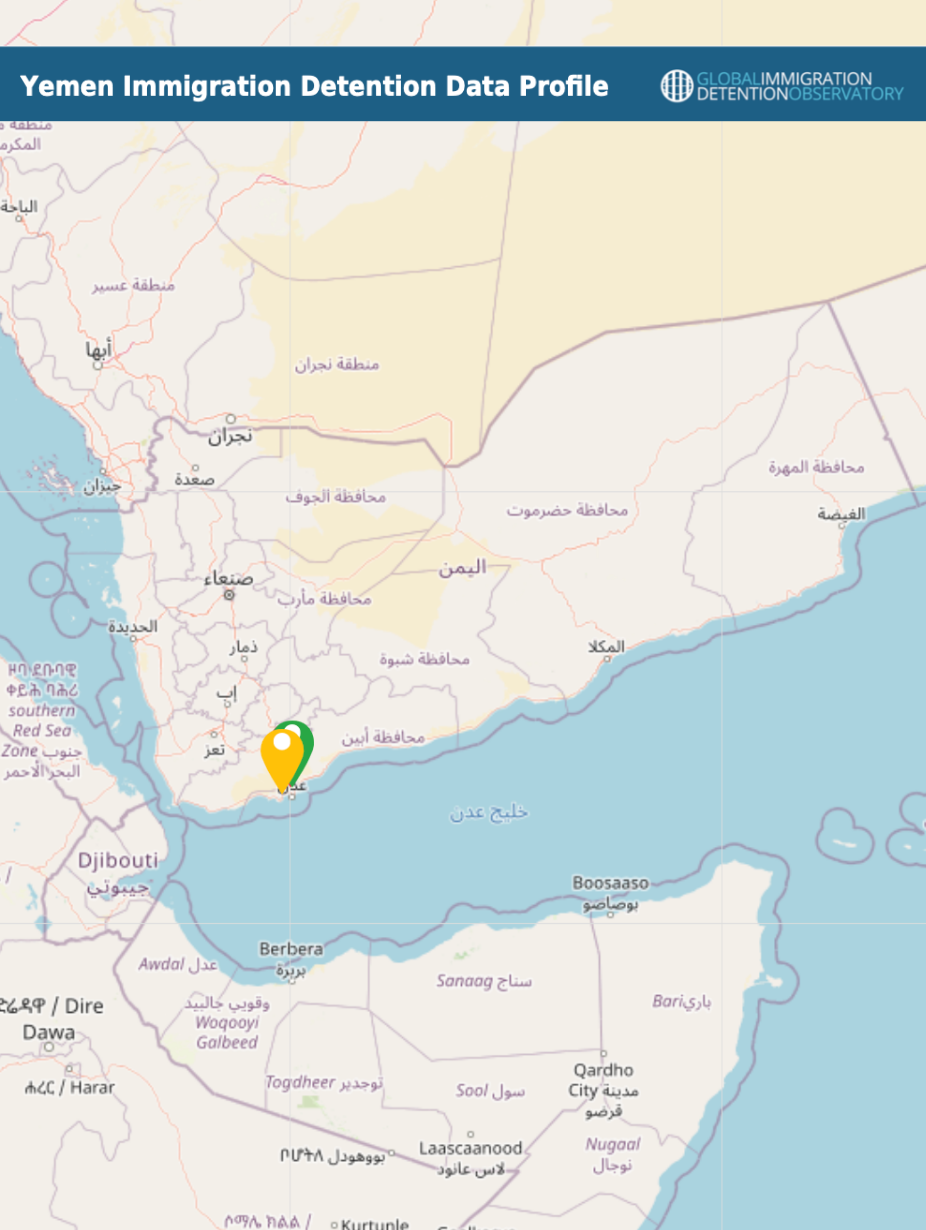 (May 2019) Although it has been devastated by famine and an ongoing civil war, Yemen serves as an important transit country for African migrants and refugees seeking to make it to Saudi Arabia or other Gulf state. But there is little available information about its immigration detention practices. One source of information has been the International Organization for Migration (IOM), whose Displacement Tracking Matrix has identified detention sites in the country. Detainees are predominantly Ethiopians or Somalians who have crossed the treacherous Gulf of Aden as part of their migration journeys, only to arrive in a country wracked by conflict and massive human suffering and deprivation.

Amidst an ongoing conflict that has led to hundreds of thousands of deaths and widespread famine, migrants and refugees in Yemen--most of whom are from Ethiopia or Somalia--continue to face detention and physical threats in the country, in part because of rumors that they are spreading COVID-19 (see the 4 August 202 update on this platform for more background). According to the IOM (27 July 2020), “the spread of COVID-19 has increased discriminatory attitudes and behaviours and further compromised migrants’ access to essential services such as food, water, shelter and health assistance. Additionally, migrants stranded in Yemen are facing increased detention and are being subjected to forced transfers across frontlines. IOM is concerned that COVID-19 restrictions are being instrumentalied to implement migrant encampment, detention and forced relocation agendas.” In December 2020, the IOM estimated that at least 6,000 migrants were detained in centres across Yemen.

Unable to cross Yemen’s northern border into Saudi Arabia, many migrants are returned to southern territories and subsequently held in detention facilities. These centres have then been targeted by armed forces. On 7 March 2021, for example, “scores of migrants burned to death ... after Houthi security forces launched unidentified projectiles into an immigration detention center in Sanaa,” reported Human Rights Watch (16 March 2021). The facility, which was the Immigration, Passport and Naturalization Authority (IPNA) Holding Facility at Sana’a airport, was detaining around 900 detainees, 350 of whom were in the hangar-like building that caught fire. The 44 killed and hundreds of surviving migrants were of African, mostly of Ethiopian, origin. Before the fire, detainees had been staging a hunger strike over their living conditions at the facility — cramped cells, a lack of mattresses, limited food and drinking water, unsanitary conditions, and abuse from guards. According to surviving detainees, the guards responded by identifying and isolating the organisers outside, beating them, locking them in the hanger, and calling Houthi security forces, who threatened that they would hear their “final prayers.” Afterwards, they said that two projectiles were launched into the hangar room by the security forces, which produced gas, exploded and started a fire.

Detention conditions and violent abuses of migrants have been criticised for years by human rights bodies, including the UN Human Rights Council’s Group of Independent Eminent International and Regional Experts. In 2018, they reported sexual abuse, physical violence, and killings of women and boys at the hands of guards in the Bureiqa migrant detention centre in Aden, where hundreds of Eritrean, Ethiopian, and Somali migrants, asylum seekers and refugees were held. In 2019, Security Belt forces arbitrarily detained around 5,000 migrant men, women, and children, placed them in ad-hoc facilities with “appalling conditions” in Lahij and Aden, and subsequently subjected them to sexual violence. According to the Group of Experts, “these sexual violence acts were situated in a broader context of structural discrimination against the survivors, all of whom were Ethiopian migrants. The caste-like system in Yemen reinforces the ‘subordinate’ status of black African communities.”

Although the sea route from the Horn of Africa to Yemen remains a busy and dangerous maritime migration route, the COVID-19 pandemic has led to dramatic decreases in migrant traffic. According to the IOM (23 February 2021), there has been a “nearly three-fourths decline in migration from the East and Horn of Africa regions towards Gulf Council Countries during 2020. … Data released by IOM show that the number of migrants crossing via Yemen from the Horn dropped from a high of 138,213 in 2019 to 37,537 in 2020. Forced returns from the Kingdom of Saudi Arabia were also significantly reduced, passing from nearly 121,000 Ethiopian migrants in 2019 to 37,000 in 2020.”

Despite this downward trend, the route continues to be used, often with tragic consequences. On 4 March 2021, smugglers on a boat carrying 200 migrants from Djibouti to Yemen threw 80 people into the sea, killing at least 20. This was the third incident in the last half year, leading to more than 70 migrants deaths. After arriving in Yemen by boat, migrants are often kidnapped and taken to informal captivity camps in Lahj, of which there are reportedly around 80 in Ras al-Ara, where they are further subjected to abuse and violence in the absence of state protection.

Wracked by war, Yemen was unprepared to respond effectively to the COVID-19
pandemic. Only around half its health facilities were functional but under equipped, and the government and de facto authorities adopted inadequate measures. As of 16 March 2021, the country had recorded 2,912 cases and 699 deaths. The pandemic has also increased food insecurity in the malnourished population and restricted humanitarian access and response. The UN Group of Experts received reports that COVID-19 measures were used as a cover to commit further violations on vulnerable communities such as detainees and migrants.

Although it has been devastated by ongoing civil war and famine, Yemen has continued to serve as an important migrant and refugee transit country--with many people often enduring torture, rape, and extortion, as well crossfire and airstrikes. In 2019, the IOM estimated that some 138,000 migrants departed from the Horn of Africa to Yemen in the hope of finding jobs as housekeepers, servants, and construction workers in oil-rich neighbouring Saudi Arabia.

During the pandemic however, thousands of migrants have found themselves stranded in the country, witnessing growing anti-migrant sentiment and stigmatised as carriers of the virus. Unable to leave the country, more than 14,000 (the majority of whom are Ethiopians) have been rounded and forcibly moved away from urban centres (although it remains unclear whether these round-ups were conducted by Iran-allied Houthi rebels or Saudi-backed government forces). Many are reported to have been abandoned in empty buildings or forced to live on the streets, while others have been confined in detention facilities where they face overcrowding, lack of access to medical services, and inadequate food provision.

Others have reportedly been shot by Houthi militia in an attempt to force migrants out of the area they control--with some forced across the border into Saudi Arabia, where they have also subsequently faced arrest, detention, and deportation (see 14 April update on Saudi Arabia). At one point in April, humanitarian organisations estimated that some 20,000 migrants had been abandoned in “slaughter valleys” along the Yemen-Saudi border, with no food, water, or aid.

Migrants in Yemen Languish in Detention as Ramadan Begins

From: International Organization for Migration
Date: 7 May 2019

Aden - Some 3,000 migrants continue to be held in two temporary detention sites in Yemen's Aden and Abyan governorates. Among those detained are Ethiopian nationals, many practicing Muslims, who are embarking on thirty days of Ramadan fasting while detained.

The International Organization for Migration (IOM) has been providing clean water and emergency food at the 22nd of May Stadium in Aden where nearly 2,500 migrants are detained.

On 21 April, authorities in Yemen began detaining nearly 5,000 irregular migrants in two sports stadiums and a military camp in the Aden, Abyan and Lahj governorates. The detainees predominately are Ethiopians, who entered Yemen to seek livelihoods and opportunities on the Arabian Peninsula.

On Friday (03/05), IOM’s Displacement Tracking Matrix (DTM) teams confirmed that 2,473 migrants remain under detention in Aden’s 22nd May Stadium. Of those, the DTM determined 873 are children.

Since last week’s headcount, more people have been brought to that site. An estimated 500 migrants are also being held in a second sports stadium in Abyan.

At the stadium in Aden, IOM is combatting the spread of communicable disease by providing water, sanitation and hygiene (WASH) and health services. Between 26 April and 5 May, IOM has conducted over 1,800 health consultations and rehabilitated 30 latrines.

In recent days, more than 1,400 people detained at the military camp in Lahj reportedly were released.  IOM is making efforts to confirm the locations and wellbeing of all migrants released in Lahj, particularly because some had been suffering from acute watery diarrhea (AWD).

At Lahj’s Ibn Khaldoon Hospital, IOM is treating more than 70 former detainees with AWD in its newly-opened diarrhea treatment centre. Tragically, since Wednesday (01/05), 14 migrants have perished from the illness

IOM remains extremely concerned for the people being held in inhumane conditions in Aden and Abyan. Alongside humanitarian partners, IOM is providing lifesaving services, while engaging with authorities to advocate for the release of those detained.

Thousands of migrants are stranded in other locations throughout Yemen. From Sana'a starting this past Monday, IOM intends to move a total of 327 Ethiopian migrants to Addis Ababa, under IOM’s voluntary humanitarian return (VHR).

United Nations Information Centre
2 May 2019 – Aden
The International Organization for Migration (IOM) is alarmed by reports of migrants dying of preventable illnesses, being shot and suffering other inhumane treatment in makeshift detention centres in Yemen, now in its fifth year of conflict.

IOM is monitoring the conditions of some 5,000 migrants from the Horn of Africa held across three sites –-two sports stadiums and a military camp–in Yemen’s Aden, Lahj and Abyan governorates.

IOM learned yesterday (01/05) that at least eight migrants died from complications related to acute watery diarrhea (AWD) at the Ibn Khaldoon Hospital in Lahj governorate. Those migrants—predominantly Ethiopian—had been held at a military camp in Lahj where more than 1,400 people are detained. Authorities at the camp report they have detected at least 200 AWD cases. IOM is establishing a diarrhea treatment centre at Ibn Khaldoon Hospital, which is currently struggling to treat 53 AWD cases, including eight severe cases.

This morning, 14 migrants with signs of AWD were brought to Aden’s 22nd of May stadium where IOM is providing critical life saving assistance. IOM’s health team, who has carried out over 1,000 health consultations at the site since 26 April, acted fast to ensure the patients were evacuated to a nearby hospital.

In Geneva, Mohammed Abdiker, IOM’s Director of Operations and Emergencies said, “I am deeply saddened by the deaths of these eight migrants, who were among the thousands of migrants being held in deplorable conditions across Yemen. We have decried this policy to the authorities, urging them to take a humane approach to irregular migration.”

IOM’s team in Aden became aware of the mass arrest and detention of thousands of migrants on 21 April and their detention in cramped buildings, not fit for human inhabitation. Abdiker noted these migrants, “at best, have only limited access to basic services or protection.”

On Tuesday (30/04), guards fired on migrants detained at the Aden sports stadium, two of whom suffered gunshot wounds, leaving a teenage boy likely paralyzed for life. That, Abdiker said, “demonstrates the inability of authorities to care for the expanding detained population as well as the immediate need to have a dedicated civilian authority humanely managing these sites. Our teams could see that without ensuring immediate access to sufficient food, clean water, safe sanitation and medical attention, a catastrophe was waiting to unfold.”

Abdiker added: “IOM stands ready to support Yemen and other regional partners to identify sustainable responses to irregular migration, which do not involve the shortsighted abuse of vulnerable migrants and fully respects international law.”

“I am greatly concerned that this dire situation will further deteriorate,” he concluded. “Our team on the ground has been making strides with local advocacy among the different levels of government. However, it is time to see these words turned into action that puts an end to this abuse before more innocent lives are lost.”

Number of Apprehensions of Non-Citizens (Year)

Acceptance Year
Observation Date
CRPD, Optional Protocol to o the Convention on the Rights of Persons with Disabilities 2009
2009
2017