Argentina rarely applies immigration detention measures and the length of detention tends to be very short. In 2015, it adopted regulations aimed at establishing specific immigration detention procedures. There are recent cases of people being detained for long periods in inadequate conditions and new government initiatives seek to boost deportation numbers.

Although Argentina has experienced a steady rise in the influx of migrants—mainly from neighbouring countries and MERCOSUR[1] member states—the country reportedly only rarely applies detention measures for immigration-related reasons.[2] In 2015, the country adopted a Manual of Procedures for the Judicial Retention of Foreigners in the framework of the National Direction of Migration[3] that clarifies detention-related procedures and human rights benchmarks. Policy initiatives introduced in 2014 seek to crack down on irregular migration by facilitating the deportation of regional migrants who have been arrested for certain crimes not related to their immigration status.[4]

The National Migration Law (law number 25.871), or Ley de Migraciones, was adopted in January 2004. This law and its accompanying Regulatory Decree (number 616/2010) include provisions against discrimination based on nationality.

In 2006, the “Patria Grande” program (known as the Programa Nacional de Normalización Documentaria Migratoria) entered into force, aiming to regularize the status of undocumented migrants and refugees arriving from countries affiliated with MERCOSUR.

According to the 2014 Oxford Pro Bono Publico Report on Arbitrary Detention, Argentina has one of the more inclusive definitions of detention, which is included in the Habeas Corpus law, number 23.098.[5] This definition provides that detention “includes all types of procedures in which a person’s freedom of movement is restricted.”[6]

Under article 70 of the Migration Law, when an expulsion order is “firm and consented,” the Ministry of Interior or the National Direction of Migration (Dirección Nacional de Migraciones) shall request the judicial authority to order a non-citizen’s detention by means of a well founded resolution and for the sole reason of effecting a removal.

As specified in the 2015 Manual of Procedures for the Judicial Retention of Foreigners in the framework of the National Direction of Migration, while requesting judicial bodies to order detention, the authorities should show facts and reasons for detention and a copy of the expulsion order. In exceptional circumstances, where there are objective reasons to presume that the person will evade the expulsion order, the Interior Ministry or the National Direction of Migration can also request the judicial authority to order detention even where the expulsion order is not yet “firm and consented.”

The 2015 Manual of Procedures clarifies that once a detention order is made, a person can be apprehended by the migration police (Policia Migratoria Auxiliar), which is comprised of the coast guard (Prefectura Naval), national police (Gendarmeria Nacional), airport security police (Policia de Seguridad Aeroportuaria), and federal police (Policia Federal).

The 2015 Manual of Procedures provides that once detention is ordered, the National Direction of Migration—either on its own initiative or following the request by the detainee—can provisionally release a person from detention. The Migration Act provides for a bail combined with reporting to migration authorities as an alternative to detention (article 71 of the Migration Law). The Global Detention Project does not have information concerning whether these non-custodial measures are used in practice or systematically considered as part of the detention decision-making process.

The migration police is in charge of detention (article 71 of the Migration Law). The Migration Law´s Regulatory Decree (article 72) provides that immigration detainees are to be placed in adequate facilities and detained separately from people in criminal proceedings. Additionally, the 2015 Manual of Procedures provides that they should be detained in different facilities (establecimientos) than those used for criminal reasons. A person’s family situation is also to be taken into account.

Exceptionally, the National Direction of Migration can confine migrants in “private facilities” (lugares privados), under the charge of the migration police, if the police is not able to guarantee adequate detention conditions. It is not clear what the term “private facilities” refers to precisely.

Although Argentina appears to have comparably tolerant migration control policies, observers have pointed to various areas of concern. For instance, there are reports of people being held for lengthy periods to complete identity checks. While detention for this reason is intended to be brief (10 hours in Buenos Aires, and 24 hours in other parts of the country) there is no information on whether these limits are systematically respected. According to a report by the Centro de Estudios Legales y Sociales, there have been cases in which apprehending officers have arbitrarily changed the reasons for arrest in cases dealing with non-citizens to include “resisting arrest” charges in addition to simple identity check, which can lead to migrants being held for longer periods and to criminal convictions.[8]

There have also been recent cases reported in the press involving migrants being detained as part of deportation procedures for periods that exceed legal limits. In one case from 2014-2015, a female migrant from South Africa was detained for six months at the prison Unidad 31 - Centro Federal de Detención de Mujeres before finally being returned to her country of origin. She was under an expulsion order, but the National Direction of Migration would only agree to pay her ticket from Argentina to Brazil, and effectively sanctioned her economically by asking her to pay for her ticket from Brazil to Argentina. She was maintained in detention until the Procuración Penitenciaria de la Nación submitted an “habeas corpus”, which ended with the National Direction of Migration finding a ticket for the woman, six months after her original sentence.[9]

Although Argentinian law explicitly provides for holding immigration detainees in specialized areas, as of late 2015 the country did not have any dedicated immigration detention facilities and authorities continued to use prisons and other sites for the purposes of immigration detention. An adviser to the country’s Immigration Department explained to the GDP that no specialized facilities have been built because “detention is managed on an ad hoc basis (very few migrants end up detained)” and because “the government is against the building of special detention centres.” She explained that immigration detainees “are held in special rooms” operated by the Policías Migratorias Auxiliares.[10]

[1] The South American free trade bloc comprised of 10 members and affiliates, which is advancing towards a regional integration process like the European Union, including migration agreements.

[6] Oxford Pro Bono Publico. Remedies and Procedures on the Right of Anyone Deprived of His or Her Liberty by Arrest or Detention to Bring Proceedings Before a Court: A Comparative and Analytical Review of State Practice. Oxford University Faculty of Law. April 2014. http://ohrh.law.ox.ac.uk/wordpress/wp-content/uploads/2014/05/2014.6-Arbitrary-Detention-Project.pdf

Why hasn’t South America witnessed the same growth in immigration detention regimes that has occurred in the rest of the world? This Global Detention Project Working Paper discusses developments across the region through the lens of international human rights standards. 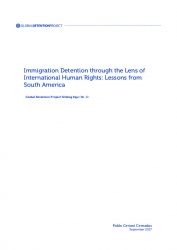 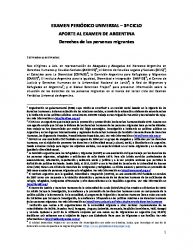 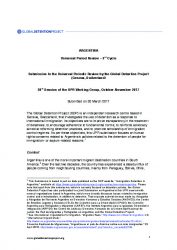 Argentina rarely applies immigration detention measures and the length of detention tends to be very short. In 2015, it adopted regulations aimed at establishing specific immigration detention procedures. There are recent cases of people being detained for long periods in inadequate conditions and new government initiatives seek to boost deportation numbers.