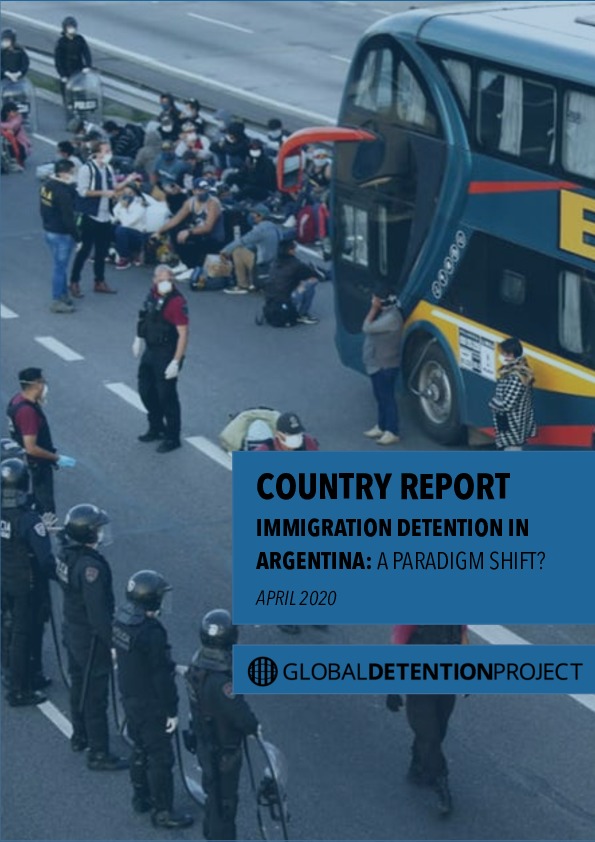 Argentina, like its South American neighbours, has long de-emphasised detention and deportation in its immigration policies. However, in 2015 its posture changed dramatically after a conservative government took office, which pushed through several restrictive policy reforms and announced the opening of the country’s first specialised immigration detention centre. A new administration that took office in 2019 has criticised some of these reforms, suggesting a change of course. Although the country began implementing measures in March 2020 to safeguard staff and inmates in the country’s prisons against Covid-19, it is unclear whether any specific measures have been taken with respect to those detained for immigration reasons.

Argentina has historically been an important migrant destination country in South America. Although the majority of immigrants come from neighbouring countries—Chile, Bolivia, Paraguay, Peru, and Uruguay—there has been an increase in the numbers of people arriving from as far away as China. Indeed, Chinese arrivals increased from 5,850 in 1995 to 14,397 in 2015. Migrants from European countries, mainly Italy and Spain, also account for a small but important percentage of the country’s immigrant population.

Argentina’s National Migration Law (NML) (Ley de Migraciones N 25.871) was adopted in 2003 and came into force in January 2004. This law and its accompanying Regulatory Decree (N 616/2010) form part of Argentina’s migration legal framework. The legislation includes provisions against discrimination based on nationality, stipulates the right to migrate, and recognises the right to education and medical assistance to people without discrimination and regardless of their immigration status.

Argentina has traditionally addressed undocumented migration through regularisation rather than securitisation. These policies have been lauded in international fora, including the UN Universal Periodic Review. The 2006 “Patria Grande” (Programa Nacional de Normalización Documentaria Migratoria) initiative, which aimed to regularise undocumented migrants and refugees from other MERCOSUR countries, has been particularly touted as an example of good practice.

In 2016, shortly after elections that ushered in a conservative government, the country initiated an important shift in its stance towards migration, announcing the opening of Argentina’s first immigration detention facility. The government stated that the facility would not be a prison “but rather a ‘retention’ facility to deprive people of their liberty as they await deportation [and] that this was for the detainees’ own good, separating them from criminal prisoners and giving them better protection.”

Despite the widely criticised move, the “retention” facility was never opened. Even before the government had announced its intention to open the facility, the National Penitentiary Office had reported that detention measures for immigration-related reasons were only very rarely applied, raising questions about why the facility was conceived in the first place.

The government followed up with a series of controversial reforms, including most notably a 2017 decree (Decreto de Necesidad y Urgencia 70/2017 – Decree of Necessity and Urgency (DNU)) modifying the country’s migration law. Representing a sharp departure from Argentina’s traditional emphasis on integrating migrants, the decree restricted the rights of migrants by, inter alia, introducing impediments to entry into the country as well as accelerating expulsion proceedings. For instance, Article 4 of the DNU, amending Articles 29 and 69 of the NML, establishing that the “omission to declare the existence of criminal records or sentences” may result in denying admission or stay or cancelling residency. Observers, including the Committee on Migrant Workers, have expressed concerns regarding the decree, in particular regarding expedited expulsions. As of late 2019, the constitutionality of the decree was being challenged in Argentina’s Supreme Court, largely on the basis that the reasons cited by the government in enacting the decree via special summary procedure, did not satisfy the “necessity and urgency” requirements provided by Article 99(3) of the Argentinean Constitution.

In December 2019, a new government took office and the new President, Alberto Fernández, questioned the DNU enacted by his predecessor. In particular, he stated that the DNU “authorises expulsions without convictions and that this is very dangerous as it can become an act of persecution against a population.” However, at that stage Fernández had not yet discussed the issue with the Ministry of Security (although planned on doing so shortly).

With the onset of the Covid-19 crisis in early 2020, Argentina closed its borders to both nationals and non-nationals. There have been some reports that authorities in parts of the country began exceptional measures to force migrants out of their provinces and to step up apprehensions of people in border areas.