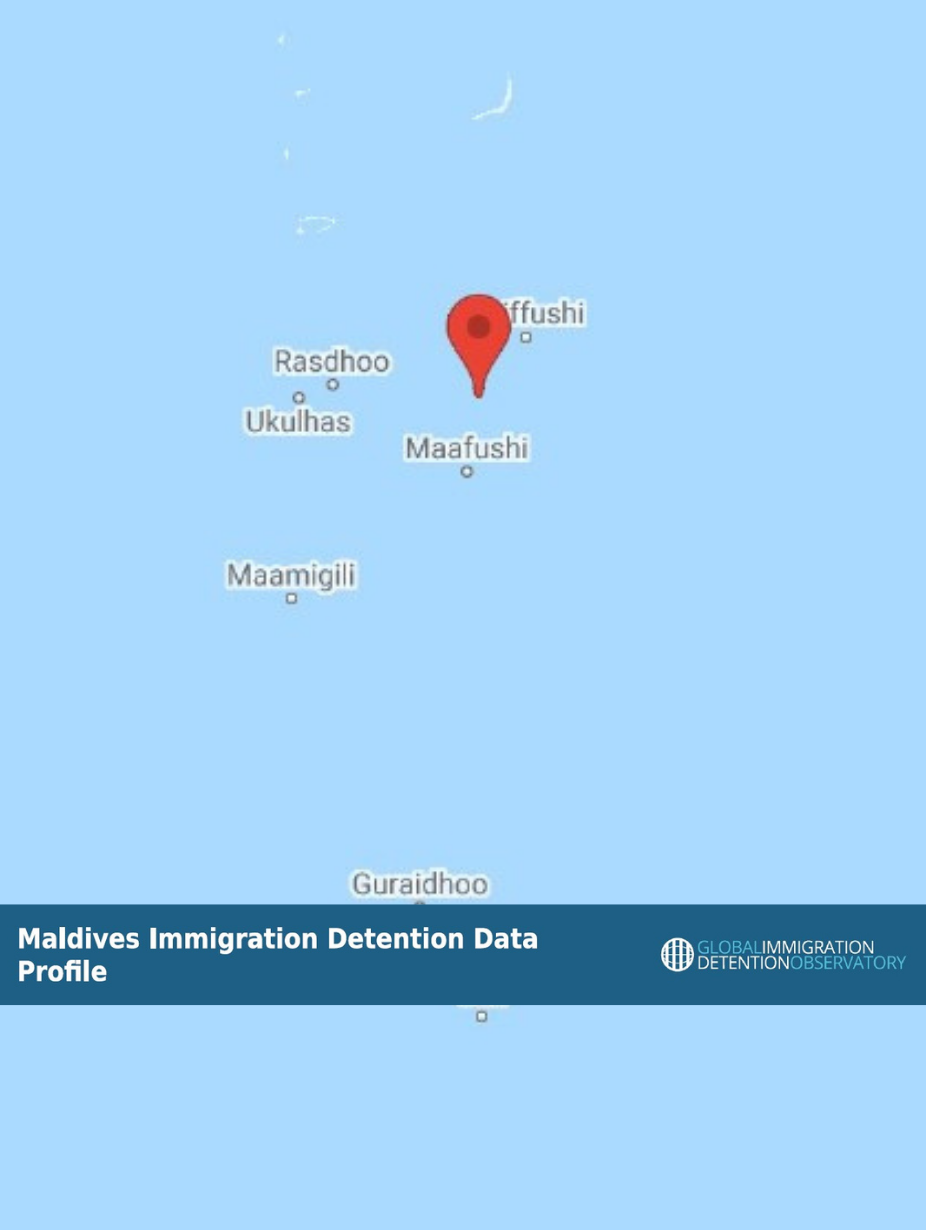 (March 2009) The Maldives, an archipelago in the Indian Ocean, has experienced an uptick in the number of foreign workers in recent years, which has spurred a government crackdown on irregular migration. The country appears to have one dedicated migrant detention facility, located in the capital Malé. The centre, which is operated by the DIE’s Expatriate Monitoring Centre, has a reported capacity of 50. A 2009 report by the Human Rights Commission of Maldives claimed that many detainees are confined at the facility unconstitutionally because they are held for more than a month without court order.

The Maldives relies heavily on a migrant labour force, many of whom are undocumented. Estimates vary widely, from 145,000 to over 230,000 migrant workers present in the country. According to an April 2020 UN report on the socio-economic impact of COVID-19 on the Maldives, the country has the largest proportion of migrant workers in South Asia, representing around a third of the resident population. In addition, at least 60,000 are undocumented, and the majority are men from Bangladesh working in construction or tourism.

Between 29 November to 9 December 2021, the UN Working Group on Arbitrary Detention (WGAD) conducted an official visit to the Republic of the Maldives, visiting 14 places of deprivation of liberty including, police custodial facilities, immigration detention centres, prisons, drug treatment and rehabilitation centres, as well as facilities for children, elderly, and those with disabilities. In its preliminary findings, the WGAD highlighted several concerns regarding immigration detention and the limited rights provided to migrant workers in detention. Although Maldives law does not expressly permit for indefinite immigration detention, according to the WGAD, the “Immigration Controller detains individuals, potentially indefinitely, under article 21(d) of the [Immigration Act 2007] . Migrants are typically arrested by the police, referred to Maldives Immigration, and held in a detention facility operated by the Maldives Correctional Service.”

The WGAD reported that migrants are not presented before a judge to review the legality of their detention, they are not provided with any legal assistance, and no interpretation services are provided even though proceedings and communications are conducted in Dhivehi.

The WGAD expressed particular concern over the seeming ad hoc nature of some migration-related detention measures.

“For example, it was informed of an informal unregistered facility of a State-owned company where large numbers of foreign workers were de facto detained following an incident on an island resort. The decision to release a migrant in detention can be based on negotiations between employers and the Maldives Immigration approves the release. The ability of employers to negotiate release places migrants in a position of vulnerability. In addition, while witness testimony can be taken prior to trial under the Criminal Procedure Act, migrants who are witnesses in criminal proceedings remain detained in immigration detention for years. Furthermore, female migrants are currently subjected to a system of citations and monitoring, owing to a lack of a dedicated facility.”

The Maldives is not a Party to the 1951 Convention relating to the Status of Refugees or its 1967 Protocol. The WGAD stated that the Maldives has no asylum system nor any national refugee protection mechanisms, contrary to the right to seek asylum under Article 14(1) of the Universal Declaration of Human Rights. In consequence, the WGAD urged the government of the Maldives to bring its immigration regime in compliance with international standards and encouraged building Government and local civil society capacity to identify those in need of international protection.

The Maldives has previously received comments regarding its lack of asylum system and lack of ratification of core international human rights treaties. During its review for the third cycle of the UN Universal Periodic Review (UPR) in 2020, the Maldives received several recommendations, including: “develop a national refugee protection framework by adopting administrative measures and establishing institutions capable of handling asylum issues (Afghanistan) (para. 133.255)” and “ratify the International Convention on the Protection of the Rights of All Migrant Workers and Members of Their Families and the International Convention for the Protection of All Persons from Enforced Disappearance (Morocco) (para. 133.20)”.

The Maldives has more than 100,000 migrant workers—comprising almost 25 percent of the islands’ total population. A large number of these migrants are from Bangladesh, and many are undocumented. With numbers of migrants increasing in recent years, authorities have increasingly cracked down on irregular migration, opening a new dedicated detention centre in Hulhamale (outside Malé) in May 2019.

Although employers are legally obligated to provide health insurance, coverage is often minimal and employers are reported to regularly confiscate workers’ papers – making accessing care difficult. On 11 March, the government announced the opening of a dedicated Covid-19 clinic specifically for migrant workers in a preschool near Malé. According to the government’s Covid-19 spokesperson, migrants using the service are not required to show work permits or other forms of documentation.

With increasing numbers of migrants testing positive for Covid-19, living conditions have come under increased scrutiny. On 6 April, authorities announced plans to relocate some 1,500 migrant workers living in areas deemed as too congested. According to the Minister of Economic Development, in some areas more than 25, 30, or even 50 migrants share rooms. Reportedly, the state plans to temporarily move the individuals to housing units in Hulhumale and residences in Gulhifalhu, Kaafu Atol. On 27 April, the country’s Minister of Tourism stated, "Expatriates are also people who provide a service to Maldives, just as Maldivians do. Even under these circumstances, protecting and respecting humanity is the biggest priority for the state. Unless safety can be provided for everyone, neither Maldivians nor foreigners will be able to emerge from this pandemic.”

At the same time, six overcrowded accommodation blocks were placed under quarantine. With police surveillance in place, migrants have been prevented from entering or exiting. Simultaneously, authorities appear to have deported some undocumented Bangladeshi migrants. On 21 April, the Ministry of Foreign Affairs confirmed that 68 persons had been returned to Bangladesh.

As of 30 April, more Bangladeshi migrants had tested positive for Covid-19 than Maldivian nationals.

Located in the Indian Ocean, the Republic of Maldives is an archipelago that includes some 200 inhabited islands. The country has a population of nearly 400,000, more than a quarter of whom live in the capital Malé. The country held its first-ever democratic presidential election in 2008.

The increasing number of foreign-born workers in the country has spurred a government crackdown in recent years. In January 2009, for example, the government issued a deadline for “illegal expatriates” to leave the country within two months or be prosecuted (Maldives Chronicle 2009).

In October 2007, the Department of Immigration and Emigration (DIE) proposed constructing a dedicated migrant detention centre “for the foreigners who violate their stay permit in Maldives especially expatriates. There is a concern for the increasing number of foreign workers who are working illegally in Maldives (DIE 2007).

As of March 2009, Maldives had one dedicated migrant detention facility, located in the capital. The centre, which is operated by the DIE’s Expatriate Monitoring Centre, has a reported capacity of 50 (HRCM 2009). A 2009 report by the Human Rights Commission of Maldives claimed that many detainees are confined at the facility unconstitutionally because they are held for more than a month without court order (Daily Mirror 2009).

(Department of Immigration and Emigration)

Expatriate Monitoring centre of the Department of Immigration and Emigration (Governmental)

Yes but have reopened

Department of Emigration and Immigration, http://www.immigration.gov.mv/