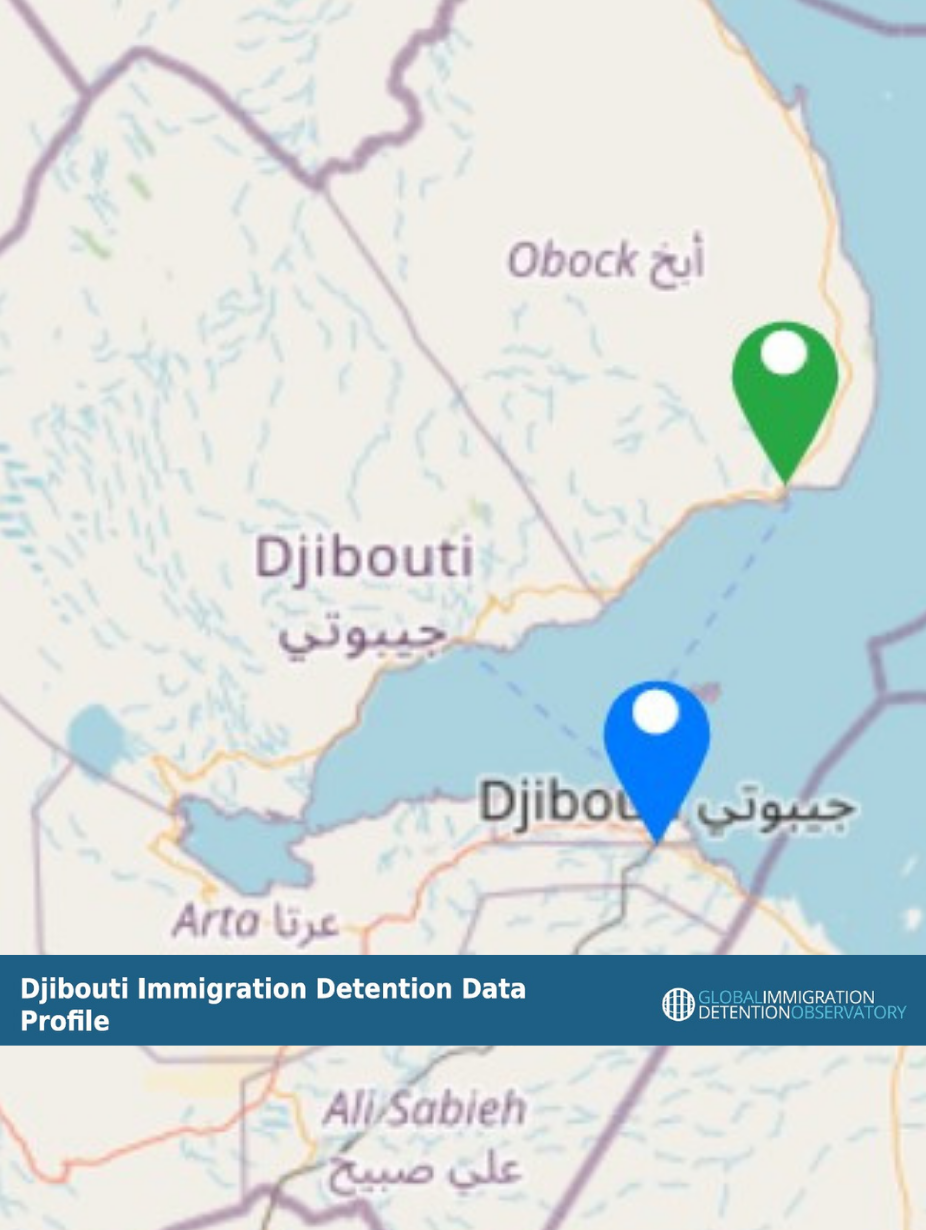 (August 2016) Djibouti serves as a major transit country for migrants from the Horn of Africa travelling to the Arabian Peninsula. Many of these migrants depart from the area surrounding the port town of Obock or from remote coastal areas. To reduce the flow of migrants, authorities regularly round up and arrest migrants travelling through the country without proper documentation. Rights groups have expressed particular concern about the situation of detained minors, many of whom claim to have been physically and sexually abused while in police custody.

Djibouti is a source and transit country for migration, to and from the Arabian Peninsula. The GDP has reported in the past that authorities regularly rounded up and arrested undocumented migrants, who were then detained in poor conditions. In the context of the pandemic, the closure of the Ethiopian border caused the blockage of migrants, who became stranded along the borders with Ethiopia and Yemen. As of 27 August, IOM reported that 870 were currently living in “spontaneous sites located along the migration corridor.”

Djibouti’s borders reopened on 16 July, which caused a surge of movement into the country, according to IOM. Nowever, there appears to be no publicly available information about whether Covid-related sanitary measures have been taken in facilities that are used to detain migrants and refugees. On the other hand, Djibouti did take some steps in its prisons to limit the spread of infections. On 23 March, the government announced that it would reduce the sentences of convicted prisoners by six-months. In April, Info Migrants reported that the country deported more than 2,000 migrants to Ethiopia, despite surging infections.

Djibouti plays an important role as a transit country for migrants from the Horn of Africa travelling to Yemen, Saudi Arabia, and other Gulf States, with an estimated 34,237 migrants arriving in Yemen via Djibouti during the first 10 months of 2014. In an effort to reduce this flow of migrants, authorities in Djibouti regularly round up and arrest migrants travelling through the country without proper documentation.[1]

Djibouti’s efforts to slow the flow of transit migrants include patrolling the coastline and intercepting migrants found at sea. In 2012, approximately 3,533 migrants were intercepted as they were making their way to Yemen. These intercepted migrants are reportedly returned to Djibouti, where they are sent to detention facilities to await deportation.

In addition to being a transit country, Djibouti serves as a destination country for refugees and migrants from surrounding countries. In the Ali Addeh and Hol Hol refugee camps, Djibouti hosts roughly 21,000 refugees.

The Regional Mixed Migration Secretariat reports that during the course of 2013, Djibouti detained and deported significant numbers of migrants. While these migrants were generally given the opportunity to claim refugee status, the National Eligibility Commission had not met in years to undertake status determination procedures. When the Commission resumed its work in August 2013, there was a serious backlog of individuals at risk of being deported. Those migrants who did not claim refugee status were generally deported.

Detained migrants in Djibouti appear to be held mainly in two locations, the Coast Guard base in the port town of Obock and the Nagad Detention Centre near Djibouti City. Although conditions at the Nagad detention centre have been described as poor, detainees reportedly have access to potable water, food, and medical treatment. Foreign embassies and the International Committee for the Red Cross (ICRC) reportedly have access to the Nagad facility, and Djiboutian authorities have allowed ICRC representatives to visit the detention centre on a quarterly basis. Although most detainees are reportedly deported within 24 hours of arrest, there has been at least one situation in which hundreds of refugees were detained in the Nagad Detention Centre for more than five years.

A particularly important aspect of Djibouti’s migrant detention practices is its detention of children. Many children intend to travel through Djibouti to the Gulf States, but become stranded in the country due to their inability to afford the trip across the Gulf of Aden. These migrant children are frequently arrested and detain by Djiboutian authorities. While in detention, children are placed in overcrowded cells with other detainees, receive irregular and inadequate meals, and face a lack of sanitary services. There have also been reports of abusive behaviour by officials, including sexual abuse by detention centre guards.

[1] This summary relies primarily on information gleaned from the U.S. State Department’s human rights reports and reports from the Regional Mixed Migration Secretariat, in particular its February 2015 report Behind Bars: The Detention of Migrants in and from the East & Horn of Africa, available at http://www.regionalmms.org/fileadmin/content/rmms_publications/Behind_Bars_the_detention_of_migrants_in_and_from_the_East___Horn_of_Africa_2.pdf.