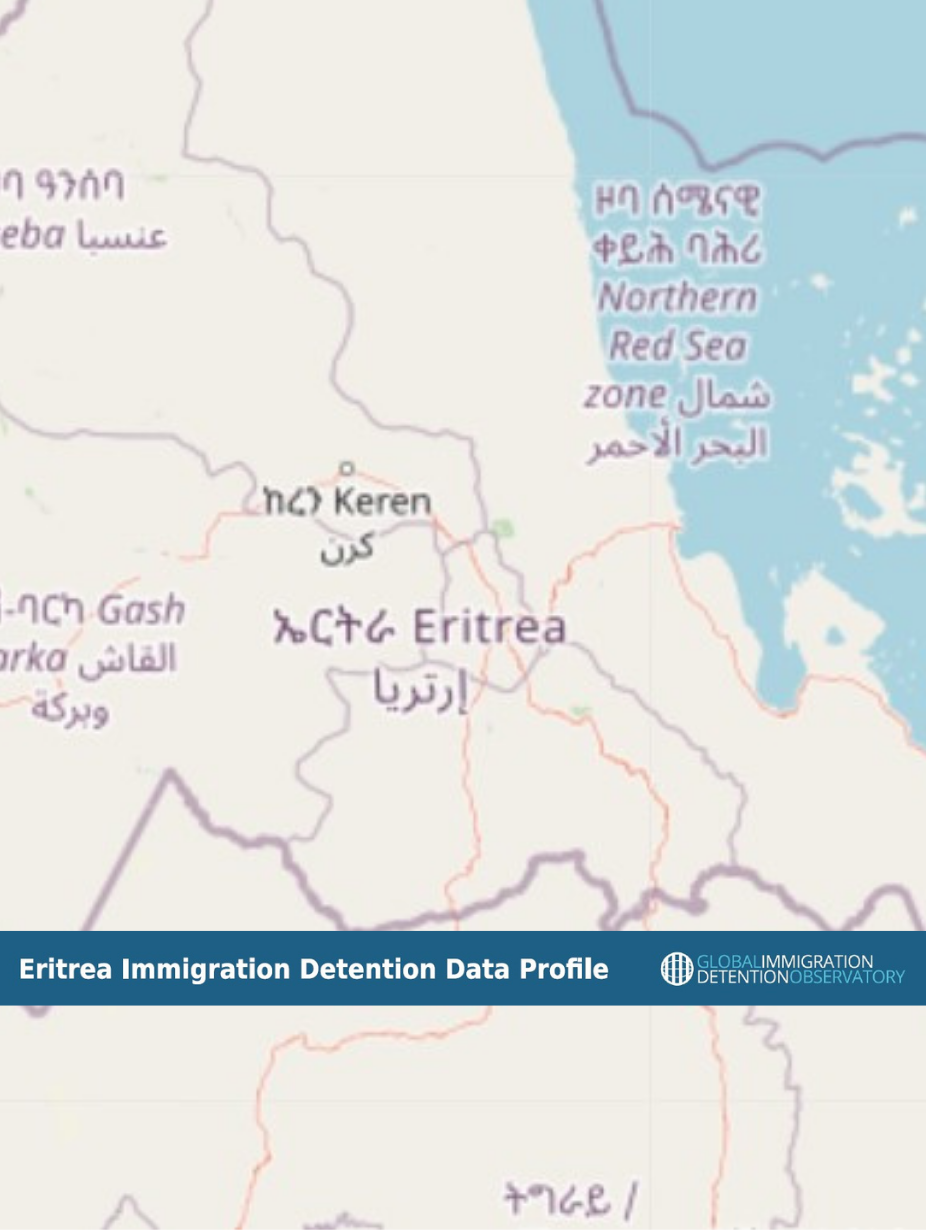 (August 2016) The detention of migrants does not appear to be a significant issue in Eritrea as it is not a destination for migrants but rather a source country for refugees attempting to flee to Europe and the Gulf. Eritrea’s authoritarian government reportedly does not provide information on the detention of foreigners or allow independent groups to monitor detention centres, making it effectively impossible to get any details about this issue.

Although Eritrea long hosted a small population of Somali refugees (roughly 2,000 as of early 2019), in mid-2019 the government closed its only refugee camp, Umkulu, spurring most of the refugees to flee across the border into neighbouring Ethiopia. By the end of 2019, UNHCR reported that there were only 650 refugees remaining in the country. The move to shut the camp came after many years of growing concerns about the treatment of foreigners in the country, including past concerns about possible clandestine detention of migrants. However, there appears to be no public information available about the current status of refugees and migrants in the country, nor about any efforts to safeguard them during the Covid-19 pandemic.

On 3 April, UN Special Rapporteur for Human Rights in Eritrea called on the government to “immediately and unconditionally release those detained without legal basis, including all political prisoners and prisoners of conscience, and to adopt urgent measures to reduce the number of people in detention to prevent the spread of COVID-19.” In addition, Human Rights Concern Eritrea, a local NGO, urged the government to release the 10,000 prisoners of conscience that are detained throughout the country’s 350 facilities. The organisation stated that in Eritrean prisons, there may be 100-400 people in a single cell. Containers are also reportedly used to hold some 30 detainees at the same time.

Prison visits were suspended on 2 April. However, according to Amnesty International, sanitary measures were not implemented. Conditions in prisons have been described as inhumane due to the “overcrowding and the general lack of adequate sanitation, healthcare and food.” In Adi Abeyito prison, which is meant to accommodate 800 people, there have been reports of the populations exceeding 2,500. Amnesty International also noted that there are many unofficial detention centres across the country about which there is little or no information available.

As Eritrea is not a transit or destination country, the detention of migrants does not appear to be a significant issue.[1] Nevertheless, according to the Regional Mixed Migration Secretariat, it is difficult to know the true extent of immigration-related detention in Eritrea because the authoritarian government denies access to relevant information and prohibits monitoring by independent groups and the International Committee for the Red Cross.

In 2013, the U.S. Department of State reported that there were no foreigners detained in Eritrea that year. However, when the Eritrean government was questioned about missing people from other countries, authorities prevented foreign officials from accessing relevant   information.

A related aspect of Eritrea’s detention practices is its detention and punishment of Eritrean nationals who attempt to leave the country without authorisation. Punishment varies depending on the intended destination of the fleeing person. For example, trying to enter Sudan is punishable by three years imprisonment, while attempting to enter Ethiopia is punishable by death. In addition, it has been reported that Eritrean refugees and asylum seekers who are returned to Eritrea are often detained and tortured. It is also not uncommon for those caught fleeing Eritrea to be held in secret locations without outside contact.

[1] This summary relies primarily on information gathered from reports from the Regional Mixed Migration Secretariat, in particular its February 2015 report Behind Bars: The Detention of Migrants in and from the East & Horn of Africa, available at http://www.regionalmms.org/fileadmin/content/rmms_publications/Behind_Bars_the_detention_of_migrants_in_and_from_the_East___Horn_of_Africa_2.pdf; and the U.S. State Department’s 2013 human rights report on Eritrea, available at http://www.state.gov/documents/organization/220321.pdf.

Recommendation Year
Observation Date
§ 30. "The Committee urges the State party to cease, with immediate effect, the excessive use of force against children, including at borders, and to take all possible measures to encourage children to continue residing in the country... 50. The Committee recommends that the State party: (a) Establish a system to collect and analyse data on children without parental care in order to understand the causes of their separation from their parents and their needs, and to guide the development of policies and programmes; (b) Allocate sufficient resources to support children without parental care, in particular the family reunification programme, and to support children and their families affected by HIV/AIDS; (c) Continue to prioritize and promote the provision of family-type and community-based forms of alternative care for children deprived of parental care for any reason, including children with disabilities, in order to reduce the dependence on institutional care; (d) Provide access to effective and child-friendly complaints mechanisms for children in alternative care; (e) Ensure adequate monitoring of alternative care facilities on the basis of established regulations; (f) Consider ratifying the Hague Convention on Protection of Children and Cooperation in respect of Intercountry Adoption." 2015
2015

IOM (Regional Office for East and Horn of Africa): http://ronairobi.iom.int/eritrea