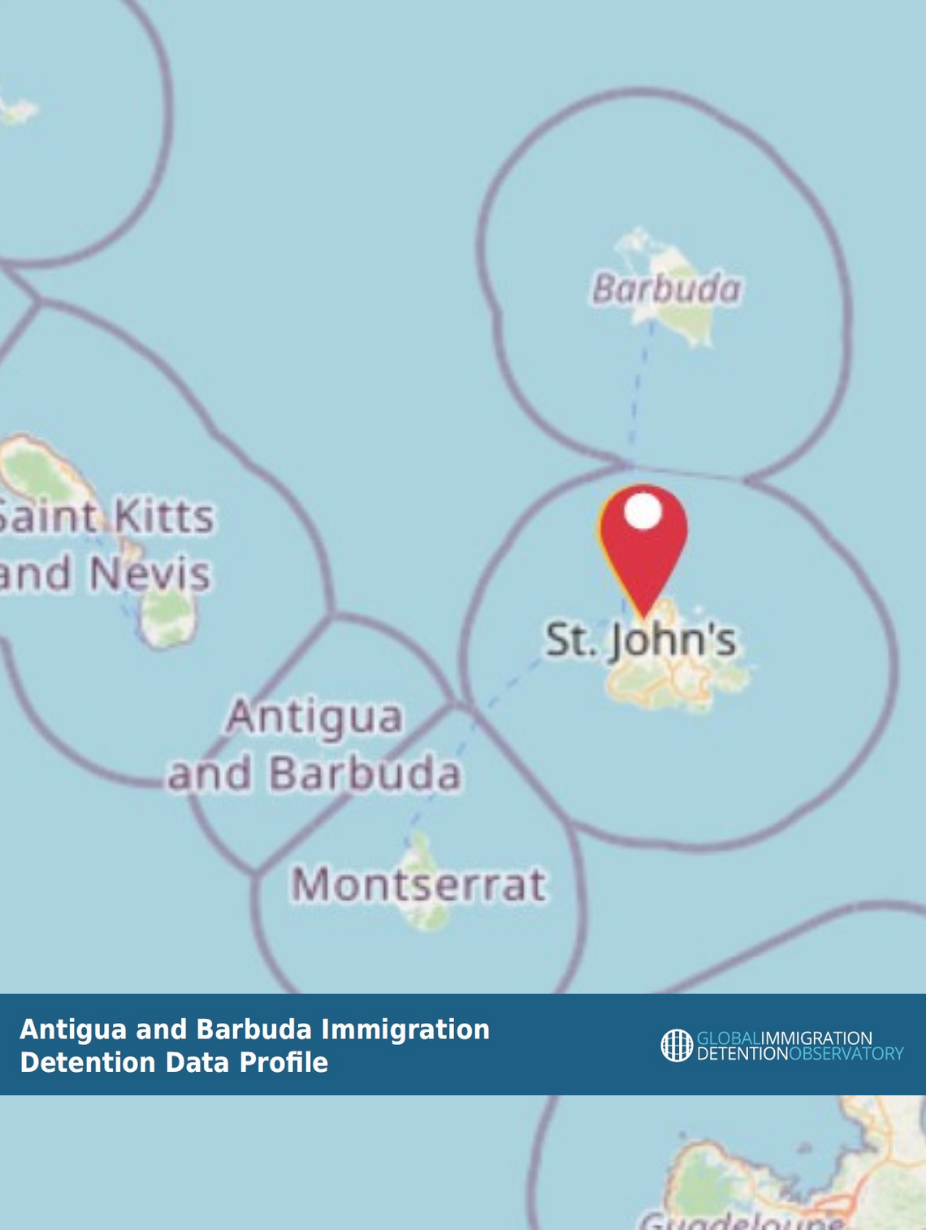 (July 2016) Antigua and Barbuda opened its first immigration detention centre in 2012. A government press release at the time stated: “The opening of the Detention Center is an effort to improve the current manner in which persons are detained. The Chief of Immigration says he expects that there will be some criticism with regard to the size and appearance of the facility but says ‘something is better than nothing.’”

Antigua and Barbuda is a Caribbean archipelago with a population of approximately 100,000 that relies heavily on tourism. After its initial COVID-19 cases were detected in March 2020, the government declared a two-week state of emergency, established a nightly curfew (8PM to 6AM), and shut all non-essential services and businesses. In June 2020, the country reopened its national borders, with arriving passengers having to present a valid medical certificate stating a negative COVID-19 test result within the previous 48 hours. In March 2021, the government started loosening other restrictions, including curfews. As of 9 April 2021, the country had recorded 1,180 cases of COVID-19 and 29 related deaths. On 8 April 2021, the country received 24,000 doses of COVID-19 vaccines, through the COVAX Facility.

The country has ratified several human rights treaties, including the Convention against Torture and Other Cruel Inhuman or Degrading Treatment or Punishment and the International Convention on the Elimination of All Forms of Racial Discrimination. However, at the time of this report, the country had not yet ratified the International Convention on the Protection of the Rights of All Migrant Workers and Members of Their Families and the Optional Protocol to the Convention against Torture.

In its concluding observations in 2017, the Committee against Torture (CAT) expressed concern about the country’s practice of detaining migrants and asylum seekers and the lack of information about migrants detained at the detention and removal centre at St. John’s police station. The committee recommended that the “State party should refrain from detaining refugees, asylum seekers and undocumented migrants for prolonged periods, especially when they are not charged with any offence under the law; use detention only as a measure of last resort and for as short a period as possible; and promote alternatives to detention.”

Also in 2017, the Committee on the Rights of the Child (CRC) said that while the country had established an ad hoc committee to deal with asylum, it remained concerned about the absence of legislation or a specific regulation governing asylum procedures, leaving refugee children vulnerable to trafficking for the purpose of sexual exploitation. The committee recommended that “the State party accede to the 1961 Convention on the Reduction of Statelessness and establish referral mechanisms to ensure the proper identification and protection of victims of trafficking, especially unaccompanied children, and to provide victims of trafficking, including children, an effective opportunity to seek asylum.”

During its review for the second cycle of the UN Universal Periodic Review (UPR), Antigua and Barbuda received numerous recommendations, including: to “establish a formal procedure to identify victims of trafficking, search for alternatives to the detention of the victims, and transfer them to the necessary services, including, when pertinent, the asylum procedure (Mexico) (para. 76.29)” and “consider acceding to all core United Nations human rights instruments, including the International Convention on the Protection of the Rights of All Migrant Workers and Members of Their Families (Indonesia) (para. 77.5).” In its submission for Antigua and Barbuda’s review for the second cycle of the UPR, the UN High Commissioner for Refugees (UNHCR) encouraged the government “to pursue alternatives to detention for migration management, to ensure that any restriction on migrants’ freedom of movement is applied only under those circumstances where it is necessary, reasonable, and proportionate to the legitimate purpose achieved and justified by international law, and that any detention of migrants is neither arbitrary nor indefinite.”

Prison conditions are harsh due to inadequate sanitary conditions and overcrowding. The country’s only prison has a capacity of 150 people, but as of August 2020 it held 269. Overcrowding has created serious COVID-19 infection risks for the prisoners and the staff and the government reportedly failed to provide information regarding numbers of COVID-19 infections in the prison. On 22 March 2021, correctional officers staged a protest to highlight problems. Two weeks earlier, 34 prisoners tested positive for the virus two weeks prior to the protest and junior staff said they were being forced to work for more than 24 hours without the required protective gears while interacting with COVID-19 positive inmates.

The tiny Caribbean island country of Antigua and Barbuda opened its first immigration detention centre in 2012. A government press release at the time stated: “The opening of the Detention Center is an effort to improve the current manner in which persons are detained. The Chief of Immigration says he expects that there will be some criticism with regard to the size and appearance of the facility but says ‘something is better than nothing.’”[1]

The country relies heavily on tourism and the financial sector. While it has experienced low levels of migration during much of its history, Antigua and Barbuda recently experienced a modest upsurge in its migrant population.[2] This could be the result of the diversification of the national economy and the significant influx of Central American migrants.

The Immigration and Passport Act of 1946 regulates entry of persons to the country. The law has provisions concerning the treatment of non-citizens who violate the law.[3] Although administrative detention is only vaguely implied in the law, section 40 lists a number offences and accompanying penalties. Thus, for instance, it provides that “any prohibited immigrant who knowingly lands” on the territory may be sentenced to a maximum six month imprisonment.[4]

The law also provides sharp restrictions on vessels and empowers masters of vessels to hold suspected prohibited persons on board. Section 26 of the act states: "The master of a vessel may use all reasonable and proper means (including force if necessary) to prevent any person landing in Antigua and Barbuda contrary to the provisions of this Act.”[5] Masters and owners of vessels are also liable for repatriation expenses under the Act.

Observers have noted that Antigua and Barbuda, like many of its neighbouring island nations, lacks a developed civil society sector that can provide independent oversight and monitoring of immigration detention operations.[6]

Acceptance Year
Observation Date
CEDAW, Optional Protocol to the Convention on the Elimination of Discrimination against Women, 1999 2006
2006
2006