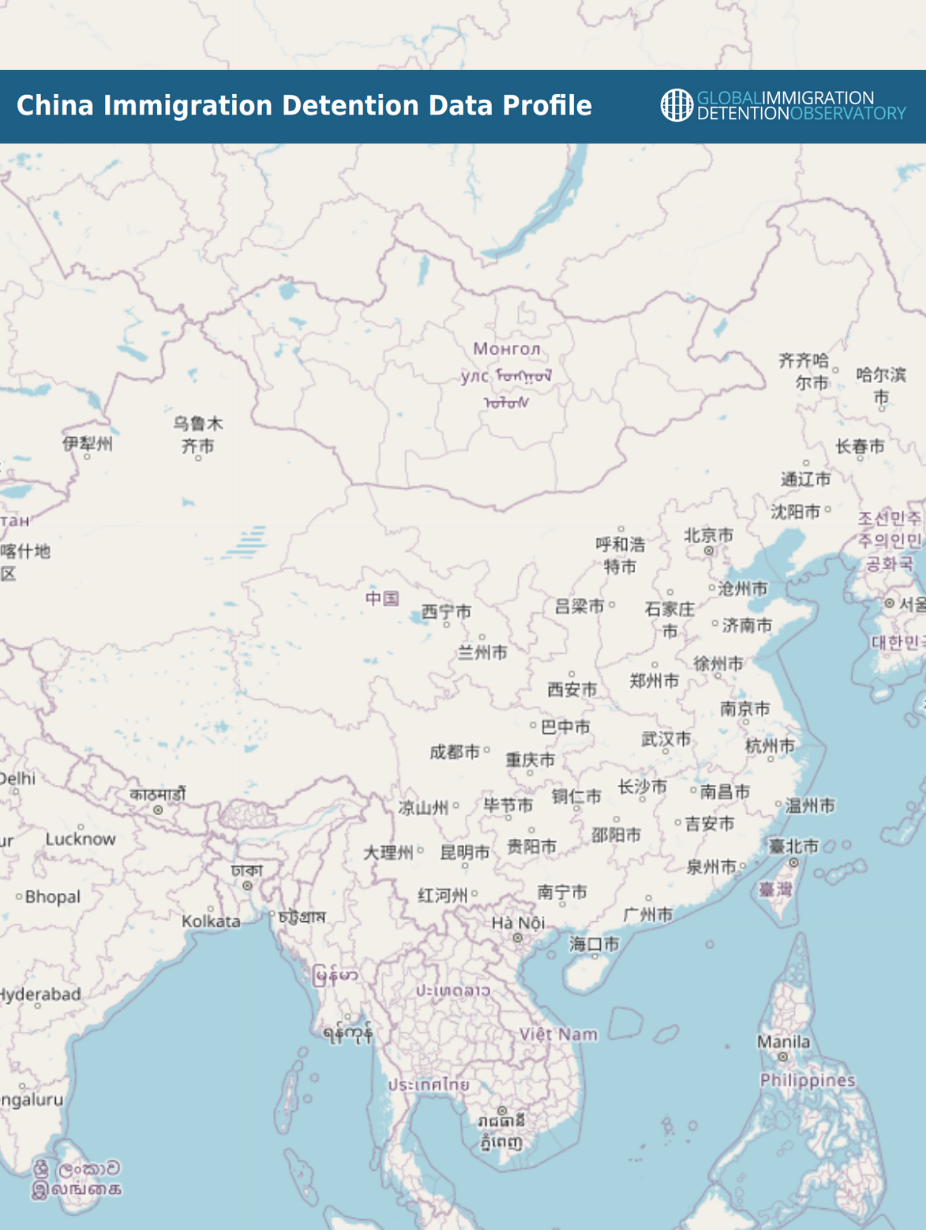 On 11 January 2020, Chinese state media reported the first known death from COVID-19. On 23 January, in the middle of the Lunar New Year holiday and almost overnight, China instituted an internal travel lockdown on people in Wuhan and other cities in Hubei in an effort to contain the domestic spread of the virus. Many other cities, districts, and counties in other provinces followed suit in restricting entry and exit of persons. On 26 March, China announced that it would temporarily suspend entry by foreign nationals holding visas or residence permits. The lockdown on Wuhan was partially lifted on 8 April, with residents being able to leave the city; however, residents have still been urged to avoid unnecessary travel. Restrictions in other cities across China have also eased, as the number of deaths reported by state media have slowly decreased.

Little is known about immigration detention in China. Article 60 of the country’s 2012 Exit and Entry Law provides that persons suspected of violating regulations on exit/entry administration can be detained for investigation. Article 63 of the same law states: “Persons who are detained for investigation or who are to be repatriated upon decision but cannot be repatriated promptly shall be held in custody in detention houses or places of repatriation.”

It is unclear about whether there have been any changes to immigration detention policy in China in light of Covid-19. According to the Shanghai municipal government’s social media, officers working in Shanghai Minhang District Detention Center have been required to remain at their work stations for 30 days, in order to avoid infecting their families and friends. A report from Chutian Metropolis Daily similarly notes that one officer had been stationed and was working at a detention centre in Wuhan continuously for 50 days (starting on 6 February), before dying of illness on 8 April. It appears that legal proceedings in different detention centres are taking place by video call rather than with a full court. In certain detention centres, lawyers have been able to meet their clients within the centres.

On 7 April, Chinese state media reported that five Nigerian nationals in Guangzhou, Guangdong Province, had tested positive for Covid-19, and that four of them had frequently visited a local restaurant, subsequently infecting the owner and her eight-year-old daughter, and transmitting the virus to a three year-old boy in Jieyang, another city in Guangdong Province. The state media report sought to dispel rumours that African nationals in Yuexiu District in Guangzhou (a district known for a high number of African migrants) had been subject to a lockdown, with the local Centre for Disease Control claiming that people wearing masks could enter and exit pending temperature checks. Nonetheless, the report noted that the cause of the rumours was likely from “growing concerns over mounting pressure from imported cases on the southern Chinese city [Guangzhou], where 111 imported infections have been reported so far. Among them, 25 are foreign nationals, with nine from Nigeria, three from Angola, two from Democratic Republic of the Congo and two from Niger. One each from France, Brazil, UK, Australia, Ethiopia, Syria, Burkina Faso, Madagascar and Russia has also been reported.”

The Guangzhou health department subsequently announced that it would begin widespread testing of African nationals. It was later reported that the department had tested every African national in the city and found that 111 of the more than 4,500 Africans in Guangzhou tested positive. The local government also established a hotline for "foreigners who experience discrimination".

Reports began to surface of Black African migrants in Guangzhou being subject to racist attacks, including being evicted from apartments and refused entry into hotels and restaurants. Many African students were forcibly quarantined on their university campuses, with little to no material support or access to food. Some Africans have criticised the local government’s policy of quarantining African people who have tested negative for the virus for 14 days for being discriminatory.

Observers underscore the broader context of xenophobic attitudes towards African migrants in China, pointing to the widespread portrayal of African migrants as ‘illegal immigrants’, ‘drug dealers’, ‘rapists’, and ‘spreaders of AIDS’. In 2011 (prior to the statewide 2012 Exit and Entry Law), Guangdong Province implemented the Interim Provisions of Guangdong Province on Administration of and Services to Aliens. These provisions empowered Chinese citizens to report on people suspected to be illegal migrants, expanded the authority of the local police alongside the foreign affairs police to stop foreigners and verify their passports, and also introduced new powers on the part of city or county Public Security Bureaus to “restrict aliens or foreign institutions from establishing residences or offices in certain areas”, namely ‘areas adjacent to Party and government buildings or military restricted zones’. In effect, this Act became a tool of spatialized and racialized control over Black African migrants. Many provisions of this Act were, as argued by Lan (2014), integrated into the statewide 2012 Exit and Entry Law.

On the ground, grassroots community groups comprising of local residents, students, and scholars, have mobilized to provide material support to African communities. The issue of the treatment of Black African nationals in Guangzhou has become an issue of geopolitical tension between China and different African countries.

There is also growing concern regarding the effect of COVID-19 on Uyghur Muslims and other ethnic minority groups detained in detention centres and camps in the Xinjiang Uyghur Autonomous Region. As of 28 February, the Chinese government had confirmed at least 76 cases of coronavirus and two deaths in the region, albeit international human rights organizations, activists, and journalists have noted that the actual number may be much higher. This is particularly concerning given reports of overcrowding, malnutrition, lack of sufficient medical facilities, and other human rights abuses in these so-called ‘voluntary vocational training centres’, though the communication blackout and widespread censorship makes it difficult to ascertain the exact conditions within them. Uyghur Muslims in the diaspora have taken to social media to raise concerns about the risks in detention centres, calling on the WHO to send a delegation to the region to evaluate the spread of the virus; the international community to pressure the Chinese government to release all detained persons; and for medical supplies and other humanitarian support to be sent to the region. In response, the Chinese government has denied that COVID-19 will pose a serious threat to minority groups.

Detention to effect removal
Detention for unauthorised entry or stay

Right to appeal the lawfulness of detention (Yes)

Recommendation Year
Observation Date
Committee on the Rights of the Child § 83. "The Committee recommends that the State party : (a) Respect the principle of non-refoulement and reminds it of its obligation under the Convention to ensure that no accompanied, unaccompanied or separated child, including those from the Democratic People’s Republic of Korea , is returned to a country where there are substantial grounds for believing that she or he will suffer irreparable harm , and that this principle applies to all children and their families without distinction and regardless of nationality; (b) Ensure that Kachin child refugees and their families are provided with temporary protection in view of the ongoing conflict in northern Myanmar; it should also allow the Office of the United Nations High Commissioner for Refugees free and unfettered access to Yunnan P rovince to conduct refugee status determinations; (c) Cease the arrest a nd repatriation of citizens of the Democratic People’s Republic of Korea , especially children , and women who have children with Chinese men, and ensure that children of mothers from the Democratic People’s Republic of Korea have access to fundamental rights, including the right to identity and education; (d) Take immediate initiatives to meet the special needs and vulnerabilities of unaccompanied and separated children seeking asylum and provide appropriate care and cater for the special needs of these unaccompanied and separated children." 2013
2013