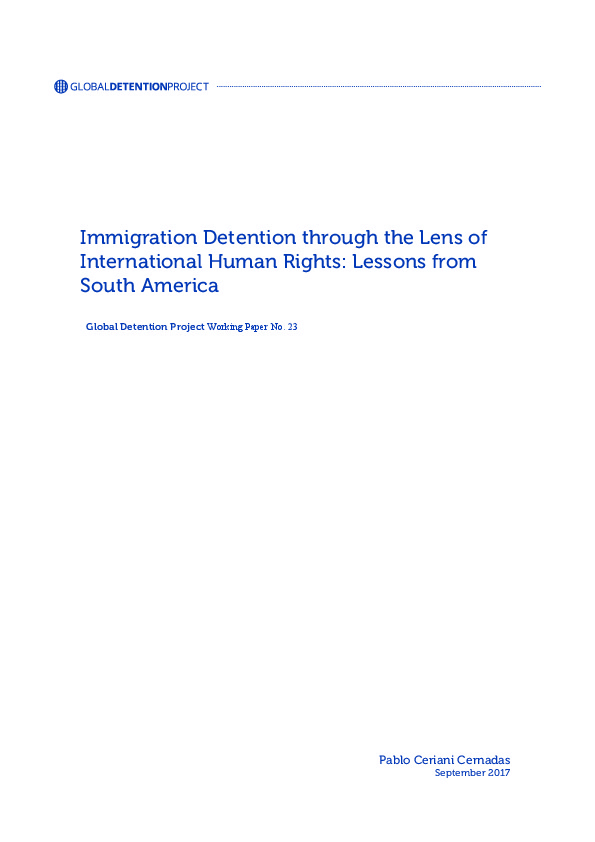 As of 12 August 2020, Guyana had registered 602 cases of Covid-19 and 22 deaths related to the disease. Guyana has been an important destination for Venezuelans leaving their country. In 2019, the International Crisis Group reported that there were more than 36,000 Venezuelans in Guyana. According to the aid group Response for Venezuelans (R4V), the Government of Guyana maintained a commendable open door policy to Venezuelans and introduced a digitalised system for biometric registration and documentation of new arrivals. As of May 2020, the government had conducted the registration of 2,090 refugees and migrants from Venezuela.

The government of Guyana adopted several measures to prevent the spread of Covid-19. On 18 March, the Director of the Guyana Civil Aviation Authority announced that airports in the country would be partially shut down for at least 14 days. A curfew was also imposed from 6PM to 6AM and domestic travel by land, sea or air, was strictly limited to travel for governmental purposes and travel to obtain or provide essential goods and services. Some measures were lifted from 3 July onwards but international travel restrictions are still in place.

Before border closures brought on by Covid-19, Immigration Officers issued a “household registration certificate” to Venezuelans upon entry to the country, which includes a provision against forced return and a renewable three-month stay permit. The pandemic has nonetheless increased the vulnerability of Venezuelan nationals. They face a lack of access to formal employment and livelihood opportunities as well as language barriers (English is the official language of Guyana), thus hindering their access to basic services such as health care and education.

R4V reported that, in coordination with a local partner, they had provided temporary accommodation and emergency shelter to 34 highly vulnerable persons (including 32 Venezuelan refugees and migrants). Education services were provided to 186 Venezuelan nationals

As regards the country’s penitentiaries, on 7 April, the Guyana Prison Service began releasing certain prisoners in order to reduce the risk of Covid-19 entering the overcrowded prisons across the country. Prisoners considered for release were those who suffer from chronic illnesses and those who had served the majority of their sentences and would be out within the next three to four weeks. The Guyana Human Rights Association had been calling for measures to be taken to reduce overcrowding in prisons due to the potential risks presented to prison staff and inmates by the virus. In addition, other measures including regular cleaning and sanitation; the installation of sinks for hand washing purposes: the monitoring of the movement of prison staff in and out of the facilities; and the provision of products and hand sanitisers have been implemented in the country’s prisons.

Recommendation Year
Observation Date
Committee on the Elimination of Discrimination Against Women § 50. In line with its general recommendation No. 32 (2014) on the gender-related dimensions of refugee status, asylum, nationality and statelessness of women, the State party: (a) Seek technical assistance from the relevant United Nations agencies for the development of gender-sensitive national legislation and policies on refugees and a gender-sensitive procedure for determining refugee status; (b) Ratify the 1951 Convention relating to the Status of Refugees and the 1967 Protocol thereto; (c) Ensure an adequate standard of living, including adequate access to education, employment, health care, sanitation, food, clothing and housing for women asylum seekers, establish gender-sensitive screening mechanisms for the early identification of women and girls who are victims of trafficking among asylum seekers and their referral to the appropriate services, and provide for appropriate monitoring and complaint mechanisms at reception and housing facilities; (d) Allocate adequate human, technical and financial resources to strengthen support services for asylum-seeking women and girls; (e) Address intersecting forms of discrimination against asylum-seeking women and girls through awareness-raising campaigns and by effectively investigating and responding to complaints about such discrimination. 2019
2019
Committee on Migrant Workers 8. [...] The Committee also expresses concern about regulations that allow the detention of migrants, fines for migrants in irregular situations and unclear procedures for expulsion or for submitting cases to court. 30. The Committee notes the steps taken by the State party to assist migrants seeking international protection and the challenges faced by the State party in responding to the increasing number of migrants from the Bolivarian Republic of Venezuela entering the State party. The Committee expresses concern about reports of abuse of authority and detention of Venezuelan migrants at border control points, including by military forces, and incidents with gangs in the border areas. 31. The Committee recommends that, in line with the Recommended Principles and Guidelines on Human Rights at International Borders published by the Office of the United Nations High Commissioner for Human Rights, the State party: (a) Respect its human rights obligations at all border crossings, including the right to due process, for all migrants regardless of their status; (b) Ensure that border governance measures address and combat all forms of discrimination by State and private actors at international borders, and are in accordance with the principle of non-refoulement and the prohibition of arbitrary and collective expulsion; (c) Ensure that migrants who have suffered human rights violations or abuses as a result of border governance measures have equal and effective access to justice and remedies, and that violators are prosecuted and appropriately punished; (d) Allocate sufficient budgetary resources to strengthen border governance, ensuring that facilities are equipped to provide human rights-based and proportionate responses to migrants arriving at international borders, and that border authorities are trained in international human rights law relevant to their work, including with regard to gender equality; [...] 34. The Committee regrets that, under section 9 of the Aliens (Immigration and Registration) Act and section 34 of the Immigration Act, the detention of irregular migrants is not an exceptional measure of last resort. It expresses concern at reports that migrants may be detained in the same facilities as individuals who have been charged and detained under criminal law. 35. The Committee recommends that the State party ensure that its national laws, policies and practices adequately respect the right to liberty and the prohibition of arbitrary detention of migrant workers and members of their families. In particular, it recommends that the State party: (a) Ensure that administrative detention is used only as a measure of last resort and that non-custodial, community-based alternatives are provided, in line with the Committee’s general comment No. 2; (b) Ensure that children are not detained on the basis of their parents’ status, and adopt alternatives to detention that allow children to remain with family members and/or guardians; (c) Decriminalize irregular migration and ensure that migrant workers and members of their families have access to legal aid, effective remedies, justice and consular services, and that the guarantees enshrined in the Convention are upheld, in full compliance with articles 16 and 17 of the Convention; (d) Provide information, in its next periodic report, on the number of migrant workers arrested, detained and expelled for immigration-related infractions, the reason for their detention and expulsion and their detention conditions, including the length of detention. 2018
2018