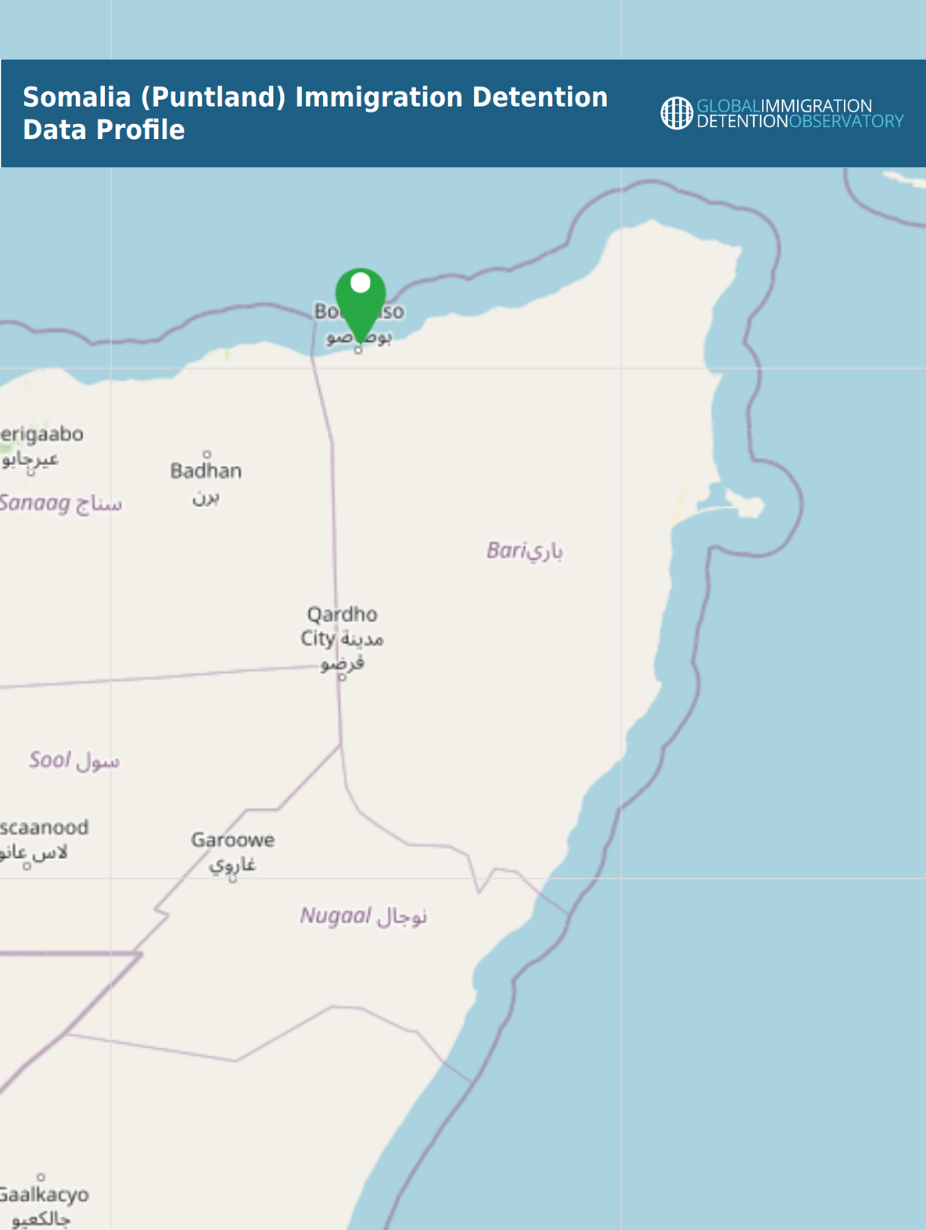 (August 2016) The autonomous Puntland State of Somalia is both a source and transit country for migrants and refugees seeking passage to Ethiopia, Kenya, and the Persian Gulf. Authorities in Puntland have created checkpoints along transit routes where migrants are intercepted and detained. Apprehended foreigners often face prolonged periods in detention.

The autonomous Puntland State of Somalia is both a source and transit country for migrants and refugees seeking passage to Ethiopia, Kenya, and the Persian Gulf. Many people from Ethiopia and Somalia attempt to use the Puntland coast as a launching point to begin the hazardous journey across the Gulf of Aden to reach Yemen and other Gulf States. Many of the smugglers operating boats that cross the gulf are notorious for their inhumane treatment of passengers and many people die each year during the crossing.[1] Roughly a dozen foreigners, mainly men between the age of 19 and 33, are reportedly detained each month.[2]

Authorities in Puntland have established checkpoints throughout the country in an attempt to intercept foreigners heading west towards Ethiopia, Sudan, and Libya. People stopped at these checkpoints report being interrogated and ultimately detained.

People can be confined in immigration detention facilities, at checkpoints, or in police stations. There have been numerous reports dating back at least a decade of migrants and refugees being detained at an ad hoc camp located in the Bossaso seaport.[3] Other reports indicate that some eight different facilities have been used in Bossaso and Garowe to detain irregular migrants, asylum seekers, and refugees.[4]

In 2012, the UN Independent Expert for Somalia described detention conditions as being close to inhumane. Detention facilities lacked food, water, basic sanitation, and proper ventilation.[5] While Somalia allows for monitoring by independent NGOs, including weekly monitoring of two detention centres by a local organization, authorities refused to authorize visits by the UN Political Office for Somalia or the UN Assistance Mission in Somalia’s human rights unit in 2013.

Previously, in 2006, the International Organisation for Migration reported that a camp was temporarily opened in Bossasso to confine “stranded migrants. UNHCR and the IOM reportedly assisted in the operation of the camp. According to an IOM Field Mission report, “At the beginning of November 2006 there were approximately 500 Ethiopians residing at a closed centre awaiting the screening process. ... The centre was located a few miles away from the Bossasso airport on a secluded dry piece of land encircled with hills. The authorities had at least four armed officers making sure no one escaped from detention. The weather is extremely hot, dry, and dusty and shelter for the migrants consisted of plastic sheets mounted on wood sticks.”[6]

[2] Regional Mixed Migration Secretariat, Behind Bars: The Detention of Migrants in and from the East & Horn of Africa, 2015, http://www.regionalmms.org/.