Malaysia is a magnet for migrants and asylum seekers despite its poor human rights record and failure to ratify key human rights treaties. Illegal entry and stay is criminalized and migrants often serve prison sentences before being transferred to one of twelve “immigration depots” while awaiting deportation. Caning, a legacy of British colonial rule, is widespread. In 2013, more than 5,000 foreigners were caned.

One of the more vibrant economies of southeast Asia, Malaysia is a magnet for migrants and asylum seekers despite its poor human rights record and failure to ratify key human rights treaties. All unauthorized foreigners, including Rohingyas fleeing Myanmar, are considered “illegal” or “prohibited” immigrants under the Immigration Act.[1] Immigration detention in Malaysia includes various unique and brutal features such as caning and detention aboard vessels.

Illegal entry and stay in Malaysia is criminalized and migrants often serve time in prisons before being transferred to one of the twelve administrative “immigration depots” while awaiting deportation.[2] Caning, a legacy of British colonial rule, remains a judicial punishment for criminal offences in the Malaysian Criminal Procedure Code. It was introduced in the Immigration Act in 2002 to deter unlawful migration. According to the Home Minister, 8,481 prisoners were caned in 2013, of whom 5,968 were non-citizens.[3] Denounced as a form of torture by Amnesty International[4] and as “anachronistic and inconsistent with a compassionate society in a developed nation” by the national Bar Association,[5] it is applied to adult males between 18 and 50 years old and leaves permanent physical and mental scars.

Some 68,000 people were placed in immigration detention in 2013 according to the local press[6] including mainly Burmese, Indonesians, and Bangladeshis. The national human rights institution, SUHAKAM, reported that 1,406 children were detained in detention centres (immigration depots) from January to October 2013.[7] Section 34(1) of the Immigration Act provides that persons may be detained for “such period as may be necessary” pending removal. Immigration detainees generally spend between two months and two years in detention.[8]

Procedural standards are reportedly very poor. Immigration detainees are rarely informed of the reasons for detention in a language they understand and they have scant access to legal counsel. There are no alternatives to immigration detention. Some UNHCR refugee cardholders detained in immigration depots can be released subject to the government’s discretion but the UN refugee agency only has access to them after they are transferred to the depots from prisons where they first serve immigration related sentences.

The Malaysian Passport Act empowers immigration and police officers to “lawfully detain” persons unlawfully entering Malaysia on board vessels during the period that the vessel is within Malaysia or the territorial waters thereof.[9] However, no information about the frequency of the application of this measure appears to be available.

The Convention on the Rights of the Child: Thirty Years On

Today marks 30 years since the UN General Assembly adopted the Convention on the Rights of the Child. The adoption of the convention marked a critical milestone in global efforts to ensure that the human rights of children are respected, including the rights of migrant and refugee children deprived of their liberty. At the heart […] 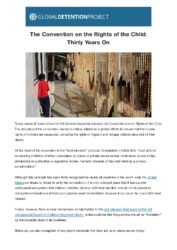 Welcome to the Global Detention Project’s April Newsletter. For any questions about our content, please contact us at:  admin@globaldetentionproject.org    OUR LATEST PUBLICATIONS   Immigration Detention in Luxembourg: Systematic Deprivation of Liberty Although Luxembourg has a very small immigration detention system, the number of detainees has risen in recent years. Since opening a dedicated detention […] 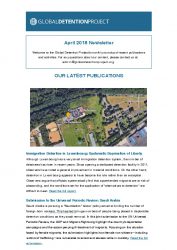 Malaysia Submission to the Universal Periodic Review of the Human Rights Council 31st session, November 2018   The Global Detention Project (GDP) is an independent research centre based in Geneva that investigates the use of detention as a response to international migration. Its objectives are to improve transparency in the treatment of detainees, to encourage […] 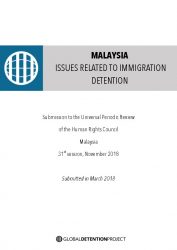 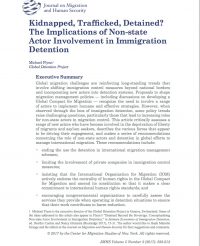 Submission to the UN Committee on the Elimination of Discrimination against Women: Malaysia

Global Detention Project Submission to the UN Committee on the Elimination of Discrimination against Women Pre-sessional Working Group for the 69th session (24-28 July 2017) Malaysia Geneva, June 2017   Issues related to immigration detention   The Global Detention Project (GDP) welcomes the opportunity to provide information relevant to the Consideration of the combined third […] 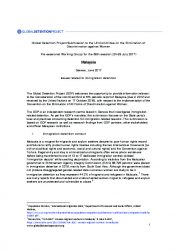 Malaysia is a magnet for migrants and asylum seekers despite its poor human rights record and failure to ratify key human rights treaties. Illegal entry and stay is criminalized and migrants often serve prison sentences before being transferred to one of twelve “immigration depots” while awaiting deportation. Caning, a legacy of British colonial rule, is […] 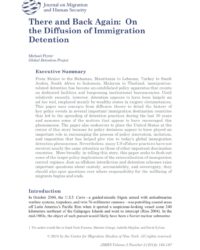