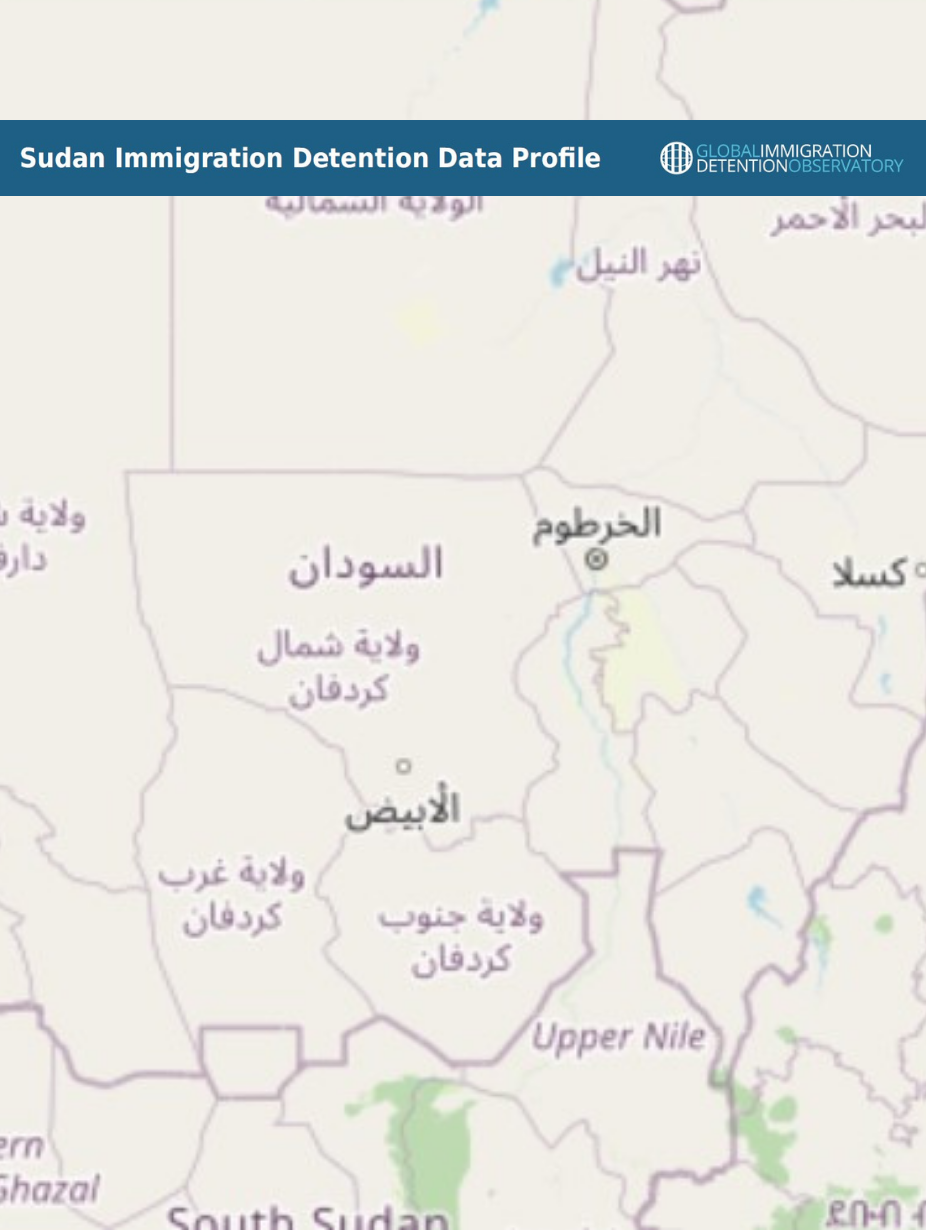 Sudan, which has an estimated population of some two million internally displaced people (IDPs), is both a country of origin and a host country for large numbers of migrants and refugees. The Darfur genocide, successive civil wars, and ongoing conflicts in neighoiring South Sudan and Ethiopia (Tigray region), have resulted in an extremely complex humanitarian situation in the country. There have been numerous reports of overcrowded refugee and IDP camps and lack of basic services, while data on immigration detention and conditions in prisons is extremely limited. There has been a growing controversy surrounding EU-funded border controls and police activities aimed at curbing migration flows across the country, in particular due to claims that these programmes have funded armed rebel groups.

Since early November, more than 27,000 Ethiopian refugees have fled the Tigray region and crossed into Sudan. According to UNHCR, on just one day--15 November--some 5,000 refugees arrived in Sudan’s border provinces of Kassala and al-Qadarif. Information campaigns are reported to have been initiated to ensure that refugees crossing into Sudan understand how to avoid the spread of COVID-19, and hand soap and 50,000 face masks have been sent to the border areas from Khartoum.

With growing numbers of arrivals--and predictions by international observers that thousands more refugees will seek refuge in Sudan--available shelter is under increasing pressure, and authorities face a rush to identify and provide more sites. A transit centre in Hamdayet, which has capacity for 300 people, is reported to be hosting 12,000. Several thousand have been placed in the Um Rakouba (or Um Raquba) refugee camp, but authorities are struggling to provide sufficient services, including food distribution.

As of the end of 2019, Sudan was reported to be hosting 1,055,489 refugees--the majority of whom are from South Sudan. The government has maintained a reservation on Article 26 of the UN Refugee Convention (Article 26 provides for refugees’ freedom of movement and the ability to choose place of residence) and requires refugees to stay in designated camps. However, more than 75 percent of South Sudanese refugees are believed to be living within the host community. Persons found exiting camps are subject to fines and return to the camp, while those apprehended in urban areas face arrest and detention if they lack valid identification cards. According to the U.S. State Department, on average between 150 and 200 refugees and asylum seekers are detained in Khartoum each month.

Reports in the past have indicated that the country uses prisons for the detention of non-nationals for migration-related reasons, as well as ad hoc immigration detention facilities. The U.S. State Department, UNHCR, and media outlets have also referred to various immigration detention facilities, including an “Aliens Detention Centre” in Khartoum, although the GDP has not identified their exact locations or been able to verify if any remain in use. Prison conditions, meanwhile, remain deeply concerning. The U.S. State Department describes them as “harsh and life threatening, overcrowding was a major problem.” The UN has reportedly provided some supplies to several prisons during the pandemic, as well as awareness campaigns on preventive measures.

Since the launch of the Khartoum Process in late 2014, the EU has focused on curbing northward migration from Sudan--via both migration control efforts, and schemes to “address the root causes of displacement.” Through the EU Emergency Trust Fund for Africa, the country--which until 2019 was under the leadership of a President facing an International Criminal Court warrant for crimes against humanity, genocide, and war crimes--has received hundreds of thousands to achieve these goals. In 2016, German media obtained documents that showed that EU efforts to curb migration focussed on border protection, and that plans were in place to establish two camps with detention rooms. Although the German Ministry of Economic Cooperation and Development reported that these plans were binding, the SOAS Centre for Human Rights Law later reported that the plans had been dropped.

Concerns that EU funds were being channeled into a country with little respect for human rights have grown since the launch of the Emergency Trust Fund for Africa. In 2016, these concerns became acute in the wake of reports that the RSF (Rapid Support Force, formerly the notorious Janjaweed), which had been hired to curb migration using EU funds, had been involved in the arrest and deportation of hundreds of Eritrean refugees and asylum seekers. Later, in March 2019, funding for the EU’s “Better Migration Management” project in Sudan--which supported the training of border control forces and policies--was suspended amid fears that the funds were being used to strengthen security forces (including the RSF) responsible for violently suppressing peaceful protests. As of July 2020 however, the programme appeared to have resumed.

Acceptance Year
CRPD, Optional Protocol to o the Convention on the Rights of Persons with Disabilities 2009
2009