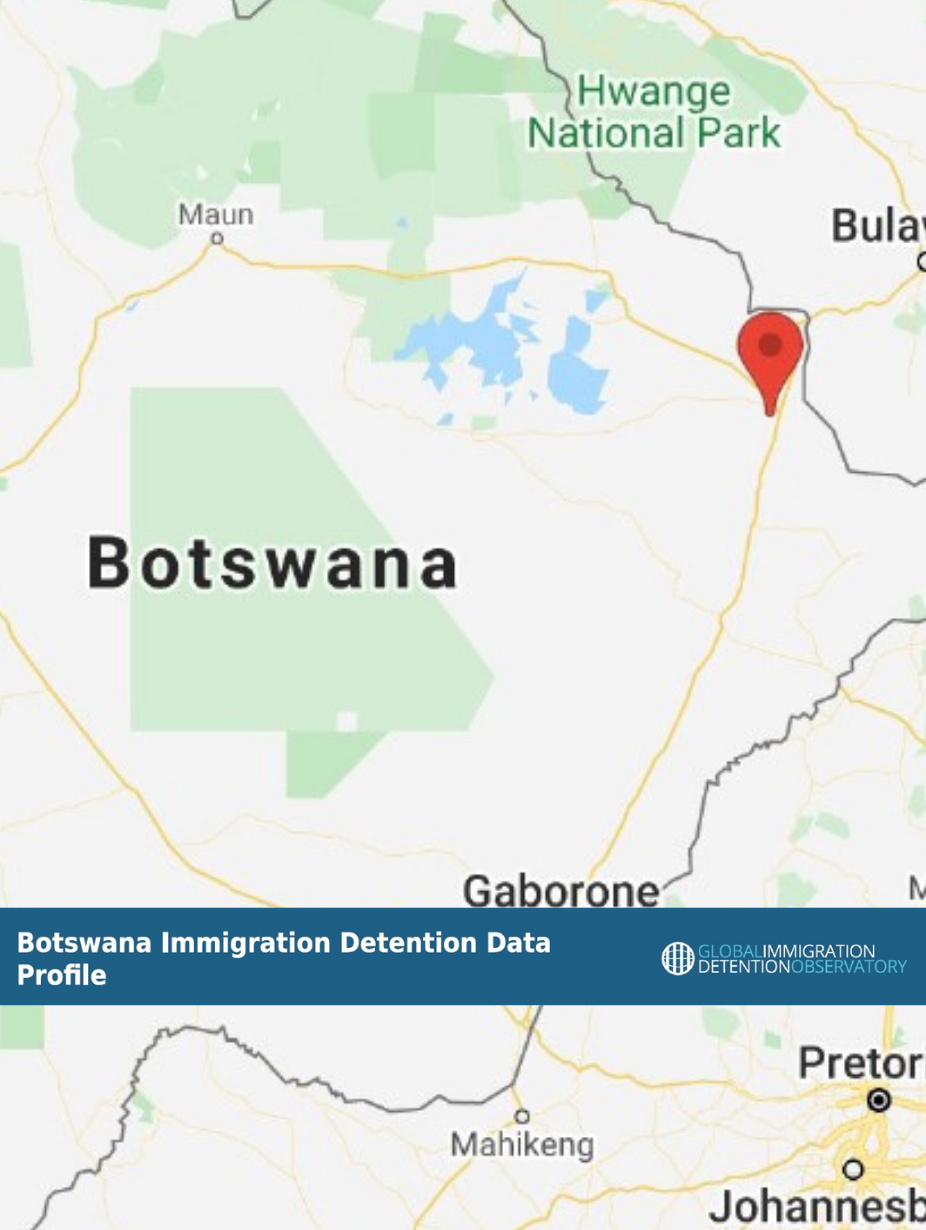 (June 2009) Botswana has traditionally been considered a welcoming country for immigrants, attracting skilled workers from neighbouring countries. However, since the early 2000s, there have been growing tensions as the number of immigrants from Zimbabwe has risen precipitously. By 2004, the country was deporting some 2,500 irregular Zimbabweans per month.

Botswana, which has long operated a “Centre for Illegal Migrants” at Francistown near the border with Zimbabwe and a refugee camp in Dukwi, has struggled in its response to the Covid-19 pandemic, repeatedly shutting down various regions of the country as cases have spread. While there appears to be little public information about whether measures were implemented at the Centre for Illegal Migrants to prevent the spread of the infection, UNHCR has provided some details about the situation at the Dukwi camp. The UN refugee agency reports that since 1 April, more than 1,000 of refugees living in the camp have “benefited from risk communication and upgraded health and sanitation systems, in line with the international guidelines to prevent the spread of COVID-19.” There has also been some information about Covid-19 response in prisons. Prison visits were suspended on 24 March and resumed on 1 June. According to one press account, when she announced the resumption of some services at prisons, the Permanent Secretary in the Ministry of Defence, Justice, and Security Matshidiso Bokole said that although “prison visits would commence” they would be “restricted to one visitor per prisoner per day for remands and illegal immigrants, while convicts would be allowed one visitor per month” (Botswana Daily News, 1 June 2020). The government announced the release of more than a hundred prisoners in mid April. A month later, 15 Zimbabwean prisoners were released and deported to Zimbabwe. During a 24 July 2020 press conference, the prison commission said that currently there were “3,729 inmates and two kids, against the prisons’ holding capacity of 4,337 and this gave an under crowding status of 14 per cent, which enabled them to observe the Covid-19 safety regulations” (Botswana Daily News, 26 July 2020).

Botswana has traditionally been considered a welcoming country for immigrants, attracting skilled workers from neighbouring countries. However, since the early 2000s, there have been growing tensions as the number of immigrants from Zimbabwe has risen precipitously. By 2004, the country was deporting some 2,500 irregular Zimbabweans per month. The government also began implementing harsher legal penalties, including larger fines and the possibility of prison sentences for irregular immigrants (Ditshwanelo 2006).

Botswana has one official migrant detention facility, the Centre for Illegal Immigrants, which is located in Francistown, a city close to the Zimbabwe border. The centre, which is under the authority of the Department of Immigration and Citizenship, had a capacity of 500 as of 2006, with separate cell blocks and dining halls for males and females, a kitchen, clinic, library, sports facilities and a multi-purpose hall (Campbell 2006, 14). Locals refer to this facility as “Teronko ya Ma Zimbabwe,” or a prison facility for Zimbabweans, as the majority of detainees are of Zimbabwean origin (Gabathuse 2008).

Non-governmental sources have alleged that Botswana’s detention practices violate human rights standards, in particular its practices of detaining asylum seekers and keeping people confined for excessively long periods of time. According to Ditshwanelo, a Zimbabwe NGO, there are cases in which asylum seekers have been detained at the Francistown centre while the Refugee Advisory Committee determines their status, which can take up to 3-4 years, well beyond the 28-day limit stipulated in the Refugee (Recognition and Control) Act (Ditshwanelo 2006, 17-18).

Media reports claim that asylum seekers from Zimbabwe are held in marquee tents at the Francistown centre while their applications are processed (Gabathuse 2008). Successful applicants are moved to the Dukwi Refugee Camp (U.S. State Department 2006), while unsuccessful applicants lose the protective refugee status, have no access to an appeal, and are considered to be illegal immigrants (Ditshwanelo 2006, 17). Children are detained with their parents and do not have access to schools or recreation facilities at the Francistown centre. The centre is administered to under provisions in the Prisons Act and the general prison code. According to Ditshwanelo, detained asylum seekers have been clad in leg-irons when taken to the hospital outside the detention compound (Ditshwanelo 2006, 17).

Yes (Constitution of Botswana, 1966: Chapter II - Protection of Fundamental Rights and Freedoms of the Individual) 1966 2006

Maximum Length of Detention of Asylum-Seekers

Does the Law Stipulate Consideration of Non-Custodial Measures (ATDs) before Imposing Detention?

Immigration Law: No
Asylum/Refugee Law: No

Is There A National Human Rights Institution (NHRI)?

The Office of the Ombudsman, Botswana

Is There a National Preventive Mechanism (NPM-OPCAT)

Insitutions that Can Make Unannounced Visits

Is the NHRI Recognised as Independent by the Global Alliance of National Human Rights Institutions?

[NEW] Is There A National Human Rights Institution (NHRI)?

Yes (The Office of the Ombudsman, Botswana) No Yes

Is There a Publicly Accessible Official List of Currently Operating Detention Centres?

Does the Country Provide Annual Statistics of the Numbers of People Placed in Migration-Related Detention?

Provision of Healthcare in Detention Centres

Limited or Some Detention Centres Only

Medical Screening upon Arrival at Detention Centres (within 48 hours)

Doctor on Duty at Detention Centres (at least once per week)

Regular Psychologist Visits at Detention Centres (at least once per week)

Acceptance Year
CEDAW, Optional Protocol to the Convention on the Elimination of Discrimination against Women, 1999 2007
2007

Office of the Ombudsman, Botswana, http://www.gov.bw/en/Ministries--Authorities/Ministries/Office-of-the-Ombudsman-of-Botswana/