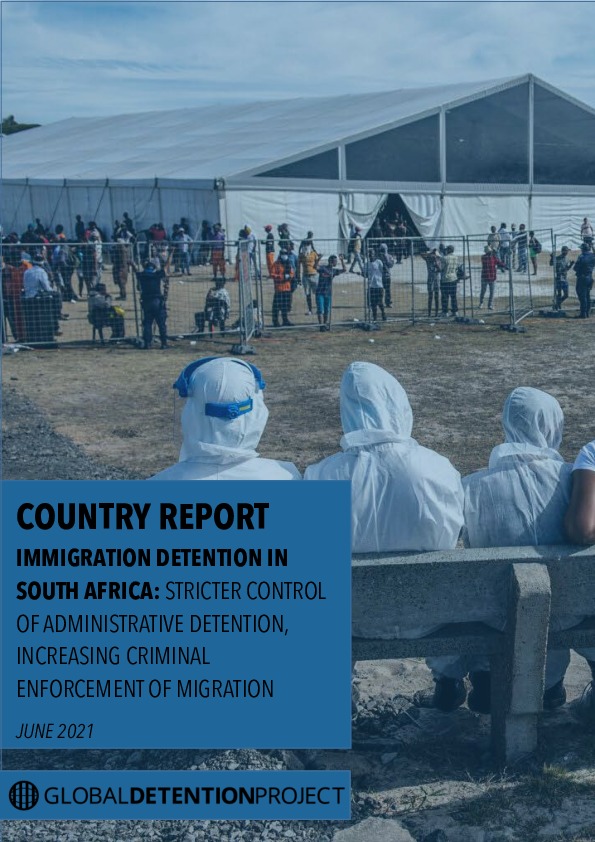 Long an important destination for migrants and refugees from across Africa and Asia, South Africa has increasingly viewed cross border movements through the lens of national security and criminality. The country’s Border Management Act, adopted in 2020, reflects this embrace of a securitisation agenda, say observers, who worry that the country’s policies will encourage an expansion of migration detention, both domestically and in nearby countries. Civil society actors say that in recent years there has been a noticeable improvement in the Department of Homeland Affair’s efforts to adhere to some detention standards, which has been spurred in part by important legal cases circumscribing the government’s detention powers. However, tightening judicial control appears to be spurring increasing use of criminal procedures to enforce migration laws.

South Africa, an important destination for migrants and refugees from across Africa and Asia, has long viewed cross border movements through the lens of national security, social instability, and criminality. This posture was underscored in 2017, when the country adopted its most recent White Paper on International Immigration, setting out the country’s long-term policy framework and strategies. Key elements of this strategy were included in the country’s Border Management Act, adopted in July 2020, which observers contend could encourage an expansion of migration-related detention in South Africa and in nearby countries in Africa.

On the other hand, recent reports by civil society actors indicate that over the past several years there has been a noticeable improvement in the Department of Homeland Affair’s (DHA) “compliance with the law governing immigration detention,” as Lawyers for Human Rights says in a 2020 report. This has been spurred in part by a series of important legal cases that have circumscribed the government’s detention powers and strengthened protections for detainees, including improved judicial oversight of immigration detention.

The DHA’s 2017 White Paper on International Immigration offers several important constructive policy suggestions concerning the role of migration in development, the need to provide protection for refugees, and the benefits of visa-free travel regimes. However, these agendas are framed in the context of purported threats to national security posed by migration and refugee movements. Thus, the White Paper emphasises that South Arica is a “destination for illegal immigrants (undocumented migrants, border jumper, over-stayers, smuggled and trafficked persons) who pose a security threat to the economic stability and sovereignty of the country.” Since the DHA paper was published, say observers, the country has largely disregarded a protection-based approach to managing vulnerable non-citizens in favour of a “risk-based approach.”

Detention and deportation figure prominently in the paper’s proposed agenda, which emphasises the adoption of policies that can improve enforcement while reducing its costs. It states: “Enforcement of compliance, in the form of detentions and the deportations, is not sustainable since detentions and deportations require a substantial amount of funding.” Among its concrete proposals for achieving more efficient immigration and asylum management, the paper calls for:

Notably, the White Paper lambasts “human rights organisations and legal practitioners,” who it accuses of exploiting “loopholes in the system to secure the release of the illegal immigrants, at the expense of the government.”

Regarding the paper’s proposals to boost South Africa’s migrant and asylum detention capacities, the Scalabrini Centre commented: “We fear that creating detention centres in remote areas of the country will result in the long-term detention of vulnerable people without adequate support or adequate conditions. Such detention is unconstitutional and contrary to international law. Aside from being expensive, research shows that encampment policies do not deter migration—and could cause resentment from local South African citizens.” They added: “We have deep and grave concerns around the changes to the asylum system in South Africa, which we believe will result in unconstitutional ‘camps’ on the borders, where thousands of asylum seekers will risk having their most fundamental human rights abused. More generally, the terms used in the White Paper (such as ‘illegal migrant’ rather than ‘undocumented person’) contributes to the unnecessary criminalization of migrants.”

In July 2020, South Africa adopted a Border Management Act (BMA 2020) that reiterates many of the securitisation priorities spelled out in the White Paper. Framed as a law that will “remedy the [country’s] fragmented border management model,” the BMA 2020 created a new Border Management Authority, which concentrates various border management responsibilities under one agency operating under the authority of the Department of Home Affairs. Some observers noted the similarities between the BMA 2020 and securitisation trends in the European Union (EU), especially since Europe’s refugee “crisis,” which they argue could result in a “new paradigm” whereby “millions will be detained in facilities across Africa or condemned to die along land and water borders,” as two scholars opined in The New Humanitarian.

South Africa’s embrace of restrictive immigration and asylum policies dates at least as far back as the early 1990s, when the country adopted the Aliens Control Act No. 96 (later replaced with the Immigration Act 2002), which initially provided for indefinite migration-related detention without judicial review. Deportations began increasing at that time, reaching their peak in 2007, when 312,733 people were removed from the country. Numbers have since fallen: 29,376 in in 2019/2020 and 11,787 in 2020/2021.

The country’s migration-related detention policies have drawn criticism for many years, in particular the operations and conditions at its only long-standing dedicated immigration detention centre—the privately-operated Lindela Repatriation Centre—its use of police stations and prisons to hold people for immigration purposes, and the endemic corruption in police and immigration bureaucracies that operate detention sites and administer the asylum process. Numerous reports over the years have highlighted allegations of abuses at detention facilities, prolonged detention periods, and repeated accusations of arbitrary detention, as well as overcrowding and poor sanitation, among other problems.

An important enabler of South Africa’s securitised migration regime is the country’s endemic racism and xenophobia—both of which have been exacerbated by social tensions that emerged as a result of the COVID-19 pandemic. As unemployment soared in the months after the onset of the crisis in early 2020, large demonstrations were held in cities including Johannesburg and Pretoria demanding the mass deportation of foreigners.

These underlying tensions are long-standing. A 2018 public survey found that 44 percent of respondents agreed that foreigners should not be allowed to live in the country because “they take jobs and benefits away from South Africans.” Xenophobic violence periodically erupts, leading to the death and injury of foreigners, as well as the destruction of their property and businesses. During one notorious spate of violence in 2015, some 6,400 non-nationals were forced from their homes and businesses.

In March 2019 the government launched the National Action Plan to Combat Racism, Racial Discrimination, Xenophobia and Related Intolerance (NAP). In the Foreword to the plan, President Cyril Ramaphosa wrote, “The time has come for us to shed all shackles of prejudice and discrimination so that we can fulfil the promise of building a united, non-racial, non-sexist and prosperous country in which all who live in it are not just entitled to equality, but experience equality in their daily lives.” Among other plans, the NAP foresaw the creation of mechanisms to facilitate migrants’ integration; to ensure that they receive the services they are entitled to; to embrace a more humane approach to managing migration; and to consider drafting a policy framework related to the eradication of statelessness.

However, soon after the action plan was adopted, major incidents of xenophobic violence erupted. In September 2019, unrest in Johannesburg saw foreign-owned shops looted and burned, several deaths, and police using teargas and rubber bullets to disperse armed protestors shouting anti-immigrant chants. Police were also accused of raiding migrant-owned businesses and detaining hundreds of people, many of whom were taken to the Lindela detention centre.