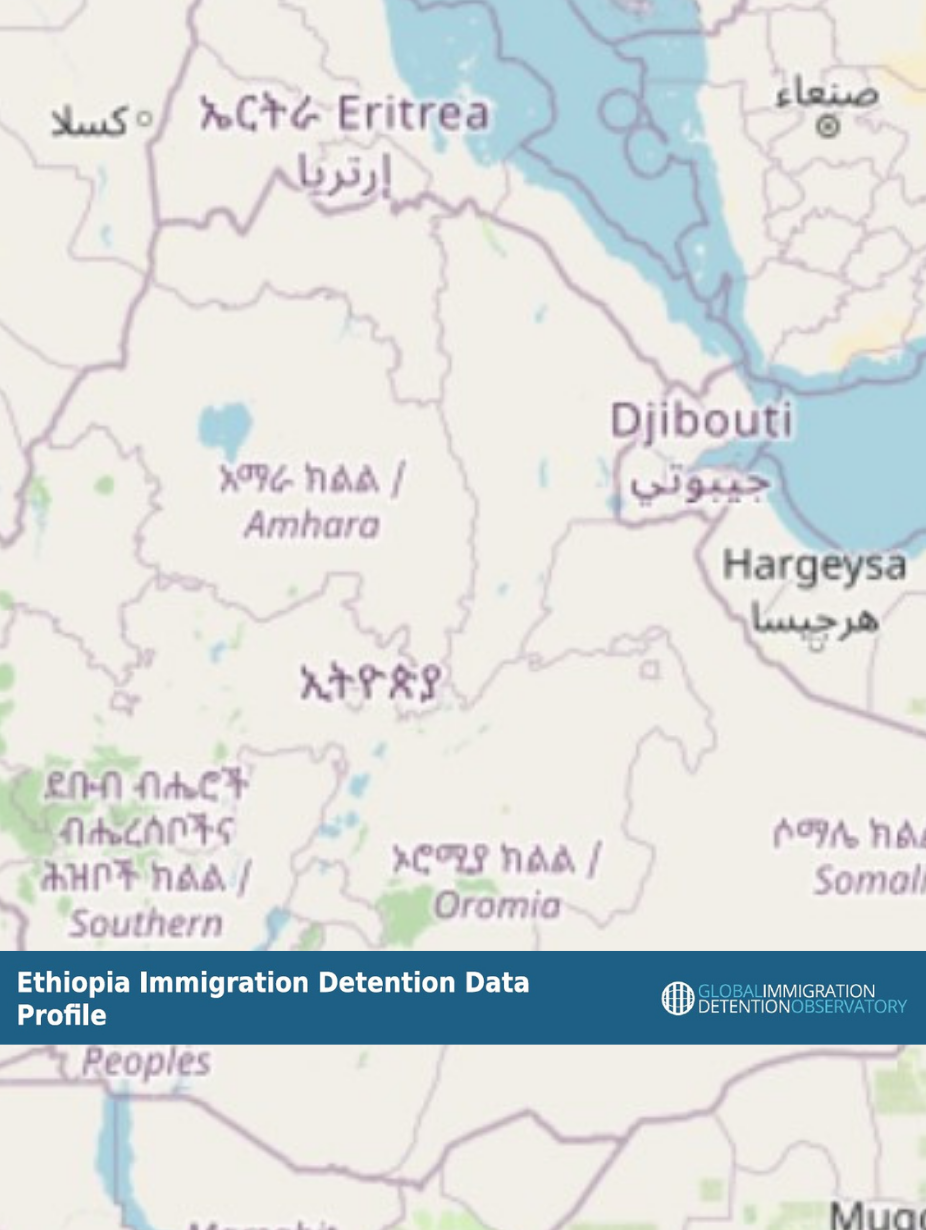 (August 2016) Although Ethiopia is an important refugee host country as well as transit country for African migrants and asylum seekers trying to reach the Gulf or Europe, little is known about its immigration-related detention practices. The country is also a major source country and Ethiopians account for the vast majority of people arriving in Yemen.

In 2020, the GDP highlighted several reports documenting the dire detention conditions and appalling ill-treatment that thousands of Ethiopian migrants had faced in Saudi Arabia (see, for example, 6 October 2020 Saudi Arabia update). Following international pressure--including from the European Parliament, as well as groups such as Human Rights Watch (HRW) who urged Saudi Arabia to release vulnerable detainees to protect them against COVID-19--Saudi Arabia and Ethiopia agreed in early 2021 to commence a repatriation programme. On 27 January 2021, the first group of 296 Ethiopian detainees were flown to Addis Ababa; since then, thousands more have been returned. According to MSF, during the first quarter of 2021 more than 60 percent of returnees evaluated by the organisation had spent between six months and one year in detention.

However, recent reports have highlighted that Tigrayans returned to Ethiopia have been separated from other returnees upon arrival and have been placed in Ethiopian detention facilities. In a tweet on 28 July, HRW Refugee and Migrant Researcher Nadia Hardman wrote: “Since 26 June 41000+ #Ethiopian migrants have returned from abusive detention in #SaudiArabia. The majority are from #Tigray. Reportedly most Tigrayan returnees are held in formal and informal detention sites in Addis & other regions w/ ltd access to families, food and water.” Their detention is believed to be part of a wider wave of round-ups of Tigrayans in Addis since late June 2021. According to a Tigrayan lawyer interviewed by Retuers, those detained “are not appearing before the court within (the legally mandated period of) 48 hours and we do not know their whereabouts - their family or lawyers cannot visit them.”

Commenting on the return of Ethiopians in a press briefing on 29 July, the country’s Foreign Affairs Spokesperson stated: “To accommodate an operation of this magnitude amid the ongoing public health challenges caused by the COVID-19, the Government set up 8 reception centers in Addis Ababa to temporarily shelter the migrants as they transit to their final destinations. The government allocated personnel and financial resources to provide the migrants with health care, feeding, psychosocial support and physical safety. Our partners are running an additional 4 shelters providing similar services but focused on migrants with special needs such as unaccompanied and separated children, mothers with babies, and human trafficking survivors. Admission to the centers is on a voluntary basis and the migrants enjoy the freedom of movement, including the right to leave anytime.”

According to UNHCR’s operational update from Ethiopia on 14 July 2021), of the 2,07,549 people to have been vaccinated against COVID-19, 3,720 are refugees. UNHCR also reports that together with its partners, it has continued to “reinforce prevention measures in the refugee camps and sites hosting internally displaced persons (IDPs).”

Following Human Rights Watch’s report highlighting the dire conditions that Ethiopian migrants have been held in in Saudi Arabia during the pandemic (see our 21 August update on Saudi Arabia on this platform), the Telegraph has revealed that the Ethiopian government has attempted to silence those stuck inside Saudi detention facilities. A leaked document submitted to the newspaper--which bears the stamp of the Ethiopian consulate in Jeddah, and which is dated 24 June 2020--warned detained Ethiopians of “legal repercussions” if they continue to upload images and videos from detention. According to the document, footage and images were causing “distress for families and the greater Ethiopian community.” The Telegraph claims that the Ethiopian government has sought to avoid excessive focus on Saudi Arabia’s detention of its nationals to avoid a diplomatic fall-out with the country, which is an important source of foreign exchange for Ethiopia. The Telegraph also revealed additional details about the inhuman conditions in these facilities (30 August 2020), reporting similar scenes to those unearthed by Human Rights Watch as well as that fact that several detainees had committee suicide. The multiple reports about Saudia Arabia’s treatment of detainees have prompted condemnation from a host of governments. The British government stated that it was “very concerned” by the reports; a spokesman for UN Secretary General, António Guterres, said that the UN was also investigating; and the IOM warned that the unhealthy, overcrowded facilities could become “breeding grounds” for fatal diseases. In response, Saudi authorities reportedly told the Telegraph that the government is “looking into the state of all official government facilities in light of the allegations.”

Ethiopia has a history of sheltering refugees and has long maintained an open-door asylum policy. The country hosts an estimated 769,000 refugees and other “people of concern.” Unlike in many other countries in the region, refugees have the right to access health care services in Ethiopia. However, after the onset of the Covid crisis, there have been reports of surging xenophobic sentiment as foreigners have been blamed for spreading the virus.

Refugees in Ethiopia were long forced to remain in designated camps. However, in early 2019, the government adopted a law giving refugees the right to live, work, and access other services outside the camps. Nevertheless, many people continue to reside within camps. In April, the government announced its intention to close Hitsats refugee camp and relocate all 27,000 inhabitants to Adi Harush and Mai Aini refugee camps, a move that UNHCR quickly criticised. Highlighting the need to avoid situations of overcrowding during the pandemic, the refugee agency warned that such a plan would risk exposing thousands to dangerous Covid outbreaks. (The number of cases in the country is already one of the highest in the continent: as of 19 August, it had recorded 32,722 cases and more than 570 deaths. On 9 June, the first case was confirmed within the refugee population.)

Previously, on 8 August, UNHCR reported that it had set up isolation units in all refugee camps to temporarily quarantine any suspected cases. The agency also said that it established 37,000 handwashing stations, trained more than 2,150 health and community outreach workers, and distributed 140,000 face masks.

The Global Detention Project has been unable to confirm many concrete details about Ethiopia’s immigration detention practices. However, there have been occasional reports of authorities arresting and deporting migrants as they pass through the country. These reports indicate that foreigners are detained in the country’s prisons prior to deportation. On 6 May, the Federal Commissioner for Prisons reported that 40,000 prisoners had been released since March (out of a total prison population of 110,000)--although no information is available confirming whether non-nationals in deportation procedures were amongst those released.

Ethiopia is an important refugee host country as well as a transit country for people seeking to make their way to the Gulf States or Europe, particularly from South Central Somalia and Somaliland.[1]

Little is known about the migrant detention practices of Ethiopia. However, there have been occasional reports of authorities arresting and deporting migrants as they pass through the country. Foreigners appear to be detained in the country’s prisons prior to deportation.

The government reportedly allows the International Committee for the Red Cross (ICRC) to visit prisons and consular officials and NGO representatives have met with prisoners. However, conditions in Ethiopian prisons are generally poor. Issues include children being incarcerated alongside adults, extreme overcrowding, limited access to potable water, and unreliable medical care.

In addition to being a transit country for migrants, Ethiopia hosts the largest population of refugees in Africa. The UN High Commissioner for Refugees (UNHCR) reported that, as of December 2014, the country was hosting 644,168 refugees. The majority of these refugees are from South Sudan and Somalia. Ethiopia’s Administration for Refugee and Returnee Affairs, along with the UNHCR, has supported these refugees by providing camps with access to healthcare, education, water, sanitation, and hygiene.

[1] This summary relies primarily on information provided in the U.S. State Department’s 2014 human rights report on Ethiopia, http://www.state.gov/documents/organization/236570.pdf; and the Regional Mixed Migration Secretariat’s 2015 report, Behind Bars: The Detention of Migrants in and from the East & Horn of Africa, http://www.regionalmms.org.

Recommendation Year
Observation Date
Committee on the Rights of the Child § 68. "The Committee urges the State party to: (a) Collect disaggregated data on refugee, asylum seeking and internally displaced children, including unaccompanied and separated children; (b) Enhance the security in refugee camps and ensure the protection of all refugee children, particularly girls, against all forms of violence, including sexual violence, exploitation and trafficking, and establish appropriate mechanisms to report and investigate such cases, and to effectively prosecute the perpetrators; (c) Urgently investigate reports of disappearances of children from the refugee camps, establish their whereabouts and prosecute those responsible for such crimes; (d) Adopt targeted policies to promote the integration of refugees, asylum seekers and internally displaced persons through the development of out-of-camp policies and to elaborate and implement a comprehensive strategy for the protection of internally displaced persons; (e) Withdraw its reservation to the 1951 Refugee Convention regarding primary education and ratify the 1954 United Nations Convention relating to the Status of Stateless Persons and the 1961 United Nations Convention on the Reduction of Statelessness; (f) Urgently improve the conditions in refugee camps, particularly by providing adequate and quality nutrition, education and health services, including mental and reproductive health services; (g) Ensure that children of refugees are registered at birth; (h) Continue to engage with the Office of the United Nations High Commissioner for Refugees in this regard." 2015
2015
Committee on the Elimination of Discrimination Against Women § 52. The State party: (a) Effectively investigate and prosecute cases of gender-based violence, including sexual violence against refugee women and girls, as well as cases involving child and forced marriage among displaced women and girls, and bring perpetrators to justice; (b) Put in place adequate training for government officials, including border officers, on gender-appropriate and culture- and age-sensitive individual screening and assessment procedures to ensure the systematic and early identification of refugees and asylum seekers, in particular women and girls who have been victims or are at risk of gender-based violence; (c) Increase the number of awareness-raising programmes, especially among internally displaced women, on the harmful impact of child and forced marriage on the health, development and education of girls, and take the measures necessary to ensure that internally displaced girls have access to education; (d) Accelerate the process, which is already underway, of ratifying the African Union Convention for the Protection and Assistance of Internally Displaced Persons in Africa of 2009. § 54. The State party ratify the International Convention on the Protection of the Rights of All Migrant Workers and Members of Their Families and provide further information on the situation of regular and irregular migrant women and girls. 2019
2019