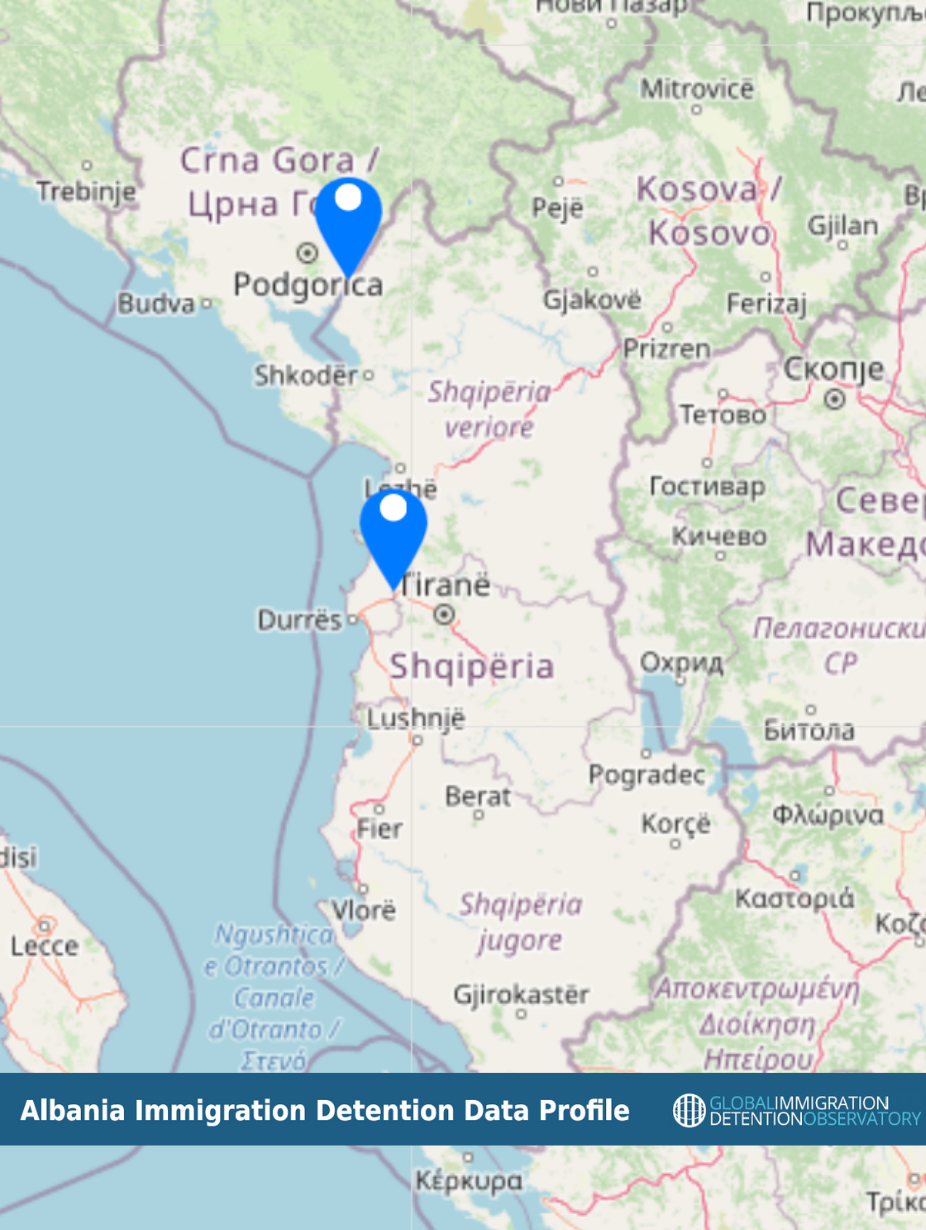 The Gates of the National Centre for Asylum Seekers in Babrru, Tirana, (Vladimir Karaj, "Violence and Hunger Stalk: Refugees and Migrants in Albania," Balkan Insight, 6 May 2020, https://balkaninsight.com/2020/05/06/violence-and-hunger-stalk-refugees-and-migrants-in-albania/)

The numbers of migrants and refugees in Albania have risen in recent years. According to the Department of Border and Migration, 11,344 people were detained at the border between January 2019 and February 2020.

The Euro-Med Monitor called on the government of Albania ‘’to immediately undertake necessary measures to provide adequate housing and sufficient food supplies to refugees and migrants in its custody, in addition to ensuring their safety from gang violence.’’

The imposition of a curfew on 16 March has impacted undocumented migrants across the country. Refugee centres have been closed, and migrants and asylum seekers left outside, looking for food.

On 4 March, the Albanian government announced the temporary release of around 600 prisoners for 3 months. This measure concerns inmates held for minor offences, as well as the elderly and individuals suffering from chronic diseases. There is an estimate of 5,500 prisoners in Albania, whose penitentiaries are overcrowded.

On 10 April, a group of more than 30 human rights organisations issued an open letter to the government protesting a plan to imprison individuals who disobey quarantine orders. The penal code was indeed amended on 16 April to impose two to eight years of jail time for rule-breakers.

Recommendation Year
Human Rights Committee 13. The Committee is concerned that the automatic detention until deportation of all persons entering the country irregularly, including minors, and the lack of adequate information and referral of asylum seekers among such persons to the asylum procedure, exposes persons in need of international protection to a high risk of refoulement. The Committee is also concerned at the poor living conditions in transit reception facilities for asylum seekers and refugees (arts. 6, 7, 9 and 10). The State party should ensure proper implementation of pre-screening procedures at the border and inside the country in order to ensure that persons in need of international protection are identified and referred to the asylum procedure, regardless of whether or not they entered the country in an irregular manner. It should refrain from detaining asylum seekers on the basis of the manner of entry into the country. It should improve living conditions in transit reception facilities. 2013
2013

According to a EU Parliament question to the EU Commission (March 2013): During his visit to Albania in December 2011, the UN Special Rapporteur on the Human Rights of Migrants expressed his concern about the closed detention centre in Kareç. The Kareç closed detention centre, which opened in 2010, was constructed primarily with funding from the European Union. The issues of accessibility, detention conditions, legal safeguards in law and practice and the treatment of detainees, which are explicitly mentioned in the UN Special Rapporteur’s report, are therefore particularly worrying. The report mentions, in particular: the ‘bad road conditions, which seriously obstruct the enjoyment of detainees’ right to legal defence and independent monitoring by national and international bodies’; the centre’s infrastructure and organisation; the poor living and hygienic conditions, such as cold and humidity and the lack of outdoor facilities or activities, which recall those of ‘a mid‐ to high-security prison’; the internal regulations, which contain provisions allowing the presence of ‘minors’ in the centre; and the lack of adequate information in a language commonly spoken by detainees about their rights and the reasons for their detention. Taking into account the readmission agreement between Albania and the EU, which entered into force on 1 May 2006 and presupposes full respect of human rights and fundamental freedoms, on what basis was this detention centre funded by the EU? Did the Commission have any say in the architectural planning and internal regulation of the centre? Is the Commission aware of the situation described above? If so, what steps has it taken to remedy the situation? If not, what concrete steps will it take now?

Ministry of Justice: http://www.drejtesia.gov.al (in Albanian)