Trinidad and Tobago, one of the wealthiest countries in the Caribbean, has framed efforts to increase detention and deportation as a matter of national security. It opened a dedicated immigration detention centre in 2009. The country’s immigration laws provide criminal penalties for various violations, including six-month prison sentences for re-entry after expulsion.

With large reserves of oil and gas, Trinidad and Tobago is one of the wealthiest countries in the Caribbean and enjoys an above-average per capita income for the region.[1] This status has helped make the country an important transit and destination country as well as a major tourist destination. Its economic success has been used as an excuse to crackdown on what officials describe as “alarming” numbers of “illegal immigrants,” who allegedly number in the hundreds of thousands and threaten the country’s national security.[2]

Citing the restrictive policies pushed by U.S. President Donald Trump, the country’s National Security Minister has said that Trinidad and Tobago needs to ramp up deportations and “to operate in the same manner as the United States.”[3] People can be subject to criminal penalties for various immigration violations, including six-month prison sentences for re-entry after expulsion.

The country opened a dedicated administrative immigration detention facility in 2009, which is called the “Immigration Detention Centre" (or IDC) as well as the “Aripo Detention Centre.” The National Security Minister explained the decision to open the facility as a deterrence measure: "Strengthening the nation's capacity to detain illegal immigrants and other aliens subjected to deportation is a key component of the comprehensive strategy to deter illegal immigration into Trinidad and Tobago."[4]

Among those who are frequently subject to immigration controls are Cubans who, since a 2016 U.S. order blocking their access to the country, have been forced to find new migratory routes.[5] Other nationalities of unauthorized immigrants frequently cited by officials are Guyanese, Venezuelans, Ghanaians, and Jamaicans.

Trinidad and Tobago adopted the Immigration Act in 1976, which was last amended in 2005. This law provides grounds for immigration-related detention. Foreign nationals can be detained under the provisions of section 14 of the Immigration Act for a hearing before a Special Inquiry Officer to determine whether they are permitted to enter Trinidad and Tobago or should be detained prior to removal. A detention order can be issued by the Minister, the Chief Immigration Officer, or a Special Inquiry Officer. During the hearing, the person can be assisted by an attorney and is provided free interpretation services.[6] There is no judicial review of this decision.[7] Detainees held at the Immigration Detention Centre are either awaiting final determination of their status or execution of a deportation order.[8]

Non-governmental sources report that asylum seekers are also placed in administrative detention.[9] While the country is a party to 1951 Convention on the Status of Refugees and the 1967 Protocol, it has not adopted implementing legislation nor established a national refugee status determination (RSD) procedure.[10] As a result, UNHCR and its local NGO partner (Living Water Community[11]) have the responsibility for identifying and providing assistance to asylum seekers and refugees. However, transfer of RSD from UNHCR to the government began in June 2014 after the adoption of the National Policy to Address Refugee and Asylum Matters.[12] The first phase included the creation of an ad hoc Refugee Unit in 2015. In 2014, 161 new asylum applications were registered by UNHCR and the Living Water Community.[13]

Government sources report that Trinidad and Tobago has a population of more than 100,000 undocumented migrants,[14] which would represent more than 10 percent of its entire population of some 1.4 million. However, according to the UN Department of Economic and Social Affairs, there were only 49,900 international migrants in the country as of 2015.[15]

The Immigration Act criminalizes unauthorized enter or residence for any person who has been already removed or otherwise lawfully sent out of Trinidad and Tobago. This irregular re-entry is punishable by up to six months imprisonment and a fine of 1,500 USD.[18]

The Immigration Detention Centre (IDC) was opened in 2009 on the Eastern Main Road in Aripo, Arima. The IDC, also know as the Aripo Detention Centre, is managed by the Immigration Division under the authority of the Ministry of National Security. Although it was initially intended for short-term detention only it is now used as a long-term immigration facility to detain unauthorized migrants prior to their removal.[19]

In 2013, the IDC had a maximum capacity of 150, with separate facilities for men and women.[20] In 2014, 131 foreign nationals were held at the facility, with Jamaicans reportedly making up the largest portion, followed by Guyanese and Africans.[21]

Concerns have been raised regarding the conditions at the Aripo facility. Squalid conditions have spurred protests and attempted suicides, according to the Emancipation Support Committee.[22] During Trinidad and Tobago’s UN Universal Periodic Review in 2011, countries urged the government to “Take prompt, appropriate, efficient measures towards the improvement of the living conditions in prisons and detention centres, including the inmates’ access to food, medical care and social services.”[23] Recommendations were also made on the need to strengthen the protection safeguards, in particular the mechanisms that allow the detection of migrants with special needs for international protection.[24]

In February 2016, an NGO submission prior to the 25th UPR session highlighted that the Immigration Act remained insufficient with regard to the protection of migrant rights and that “lengthy administrative detention, unfavorable detention conditions, detention of migrants, asylum seekers and refugees, lack of access to by NGOs suggest that reform of the immigration system is imperative.” They also urged independent monitoring of the detention centre.[25]

[10] UNHCR, Universal Periodic Review, “Submission by the UNHCR for the OHCHR’ Compilation Report on Trinidad and Tobago”, March 2011. http://www.refworld.org/pdfid/4d886a9f2.pdf

[13] Statistical Yearbook 2014, Table 10, Asylum applications and refugee status determination by country/territory of asylum and level in the procedure, 2014. http://www.unhcr.org/54cf9bc29.html

Immigration detention in Trinidad and Tobago

Trinidad and Tobago, one of the wealthiest countries in the Caribbean, has worked to limit unauthorized migration to help boost its tourism appeal. It opened a dedicated immigration detention centre in 2009. The country’s immigration laws also provide criminal penalties for various violations, including six-month prison sentences for re-entry after expulsion. 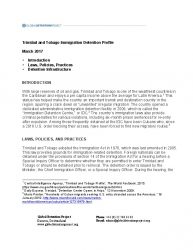