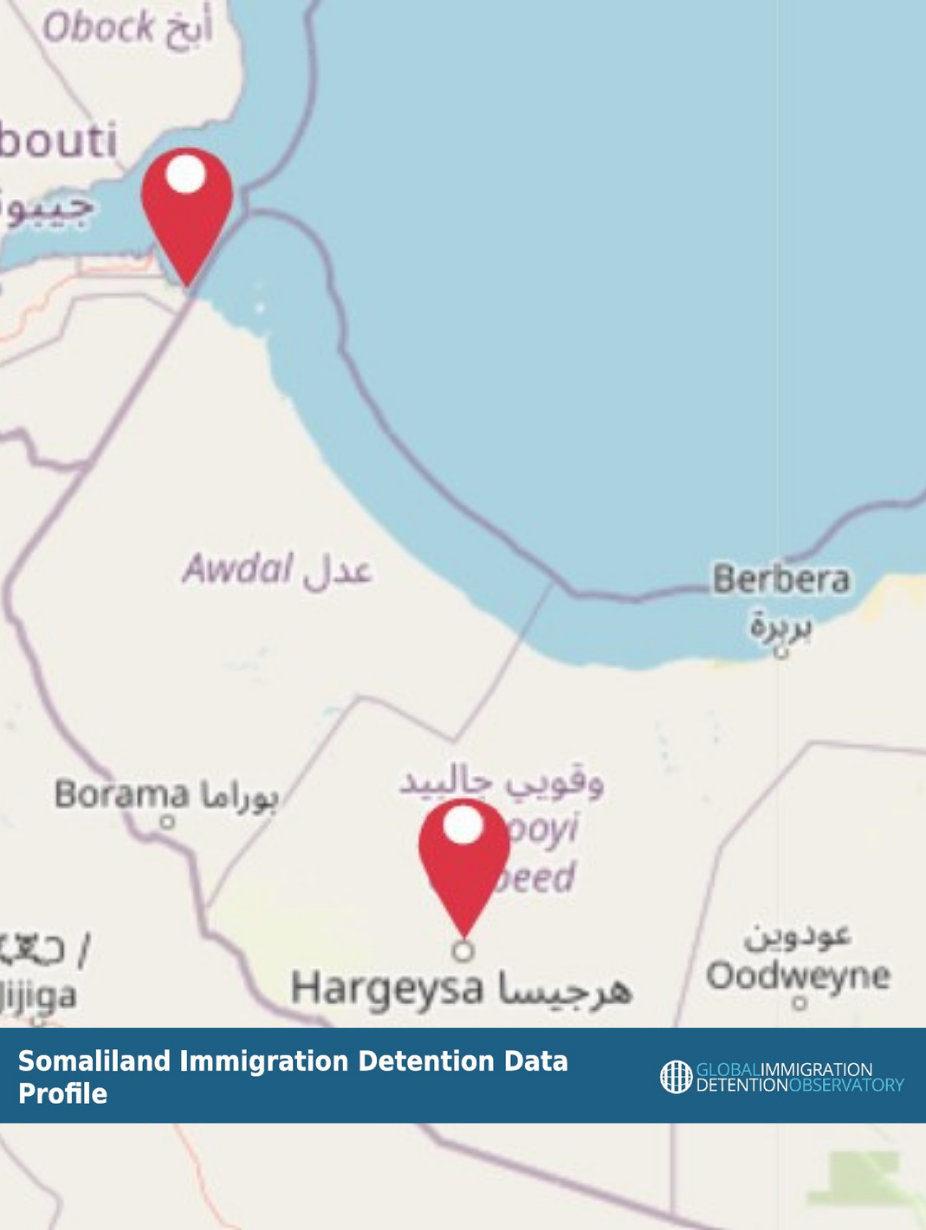 (July 2016) Somaliland, an autonomous region of Somalia and an unrecognised self-declared state, is a destination, transit, and source country for migrants and asylum seekers in the Horn of Africa. The arrest and detention of undocumented foreigners is common as the authorities seek to restrict the flow of transit migrants. Immigration-related detention tends to last for only a few days and migrants are deported as quickly as possible.

Somaliland, an autonomous region of Somalia and an unrecognized self-declared state, is an origin, destination, and transit country for migrants in the Horn of Africa. Many Ethiopians and Somalis travel through Somaliland to Puntland or Djibouti en route to the Gulf States. Somaliland also serves as a destination for economic migrants and asylum seekers form Ethiopia. The arrest and detention of migrants is common as Somaliland authorities attempt to restrict the flow of migrants and decrease the amount of unauthorized foreigners residing in the territory.[1]

Undocumented people detained in Somaliland are usually held in police stations. Detention tends to last several days at most because Somaliland authorities do not have the resources to support long-term detention. Authorities seek to either deport intercepted migrants or transfer their care to the International Organization for Migration, which occasionally provides assistance to apprehended migrants in the territory. However, people intercepted in Loya’ada, a border town between Somaliland and Djibouti, face the possibility of unlimited detention depending on when they can be transported back to the Ethiopian border.[2]

Migrants have reportedly been detained at Loya’ada police station (based on its geographical location, on the border between Djibouti or Somaliland, it is unclear to which territory this facility rightly belongs). Conditions at this station, according to the Somaliland Mixed Migration Task Force, are very poor.[3] Migrants have also been detained at the Central Police Station in Hargeisa. One refugee who was detained at the Central Police Station told Human Rights Watch that six injured refugees detained there “had not received medical assistance for three days before they were released.”[4] The conditions in Somaliland’s prisons, where migrants are also likely detained, have been described as inhumane by the UN Independent Expert for Somalia.[5] Issues include a lack of water, sanitation, and ventilation. In 2013, Somaliland authorities permitted a Prison Conditions Management Committee that had been organized by the UN Development Programme to visit prisons. The UN Assistance Mission in Somalia’s Human Rights Unit has also been allowed to visit prisons.[6]

[1] Regional Mixed Migration Secretariat, Behind Bars: The Detention of Migrants in and from the East and Horn of Africa, 2015, http://www.regionalmms.org/.

[2] Regional Mixed Migration Secretariat, Behind Bars: The Detention of Migrants in and from the East and Horn of Africa, 2015, http://www.regionalmms.org/.

[3]  Regional Mixed Migration Secretariat, Behind Bars: The Detention of Migrants in and from the East and Horn of Africa, 2015, http://www.regionalmms.org/.