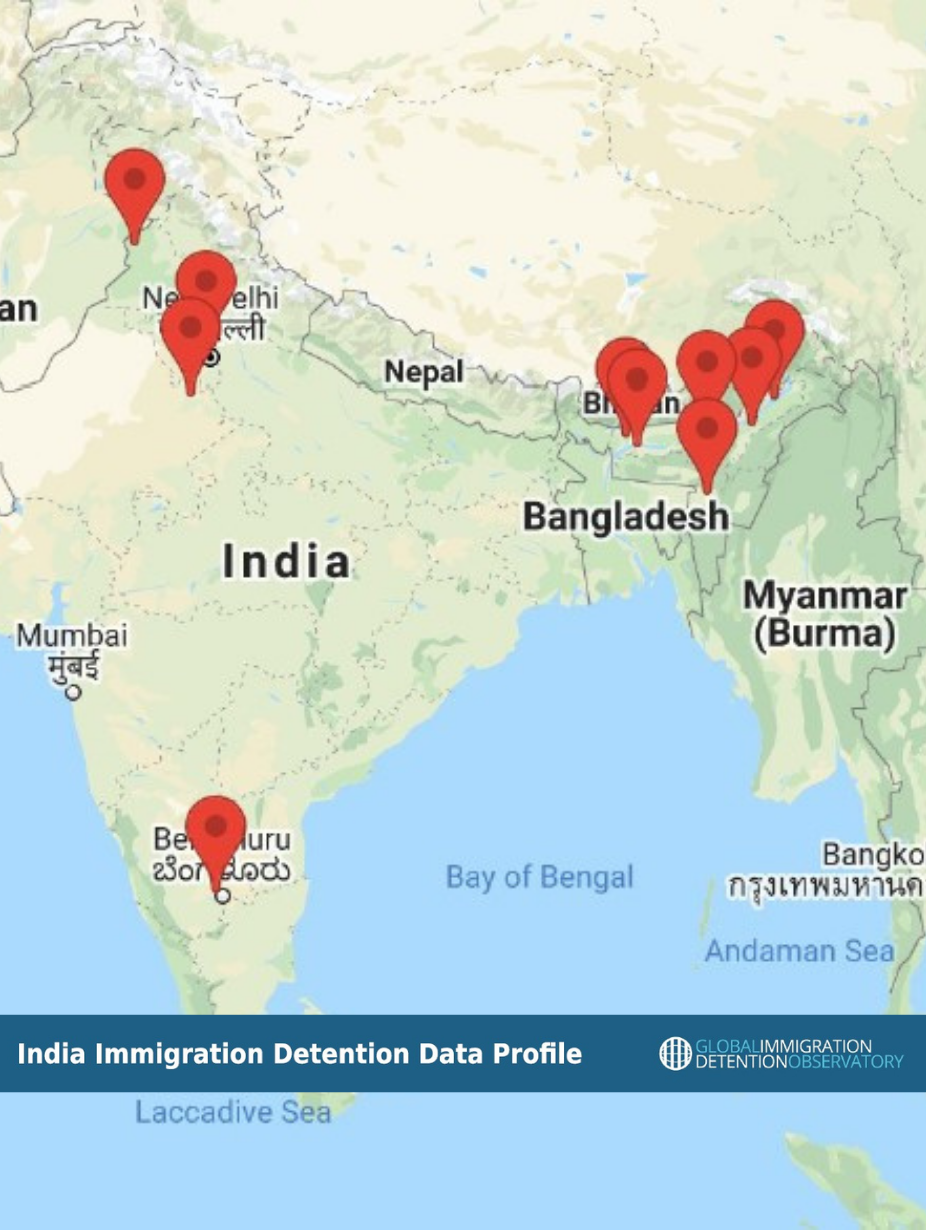 Rohingya Refugees Along with their Luggage outside a Mosque in Jammu, Kashmir (J. Singh, EPA, "India Detains Rohingya Refugees and Threatens to Deport them to Myanmar," The Guardian, 8 March 2021, https://www.theguardian.com/world/2021/mar/08/india-detains-rohingya-refugees-and-threatens-to-deport-them-to-myanmar)

As a second wave of COVID-19 has swept across India, infection and death rates have skyrocketed across the country. On 1 May, some 392,488 new cases were reported--the largest one-day increase on record for any country--as well as 3,689 deaths, although observers suggest that real figures may be significantly higher.

Despite COVID rates surging since March, authorities have continued to arrest and detain non-nationals. In early March, an estimated 170 Rohingya refugees were detained in the city of Jammu (Kashmir), after police conducted raids in camps and summoned others to a “verification” exercise. Placed in a “holding centre” in Hiranagar (the Hiranagar Jail, which was reportedly converted into an immigration detention facility that same month), the group were subsequently informed of plans to deport them to Myanmar. Despite several Rohingya refugees challenging the deportation order, on 8 April the Supreme Court rejected an application to stay the deportation of the group, even as violent unrest in Myanmar surged following the 1 February coup. During the hearing, the Chief Justice of India (CJI) commented, “Possibly that is the fear that if they go back to Myanmar, they will be slaughtered. But we cannot control all that. . . We are not called upon to condemn or condone genocide.” The court also accepted the government’s claim that Rohingya refugees constitute a threat to internal security, while also failing to consider the applicability of non-refoulement. Members of the Rohingya community have called the decision a “death warrant.” (To-date, the GDP has been unable to confirm whether the planned deportation has been conducted.)

This case is part of a wider set of restrictions targeting Muslim communities in India since the Modi government came to power in 2014. In 2017, local BJP leaders in Jammu launched a campaign demanding the expulsion of all Rohingya from the region. In West Bengal, where elections are currently being held, the BJP has vowed to deport all Rohingya if the party wins.

Elsewhere in Assam, authorities have been detaining purported “illegal foreigners” (largely Bengali-speaking Muslims) in six detention centres. As previously reported on this platform, in April 2020 the country’s supreme court called for the release of people who had been detained for more than two years--and if they were able to produce two sureties worth 5000 rupees (approximately 53.33 GBP). However, as one observer commented, the court’s decision was not influenced by the dangers posed by COVID to detained populations, “Instead the reasoning implicitly belies the punitive motivation behind detention, by basing release on the amount of time ‘served’.”

In mid-April, India’s Supreme Court directed the government to release “illegal foreigners” detained in Assam for more than two years in order to avoid overcrowding.

Assam has become a hotspot for immigration detention in India, as scholar Sujata Ramachandran reported in a 2019 Working Paper for the Global Detention Project: “The country’s detention and deportation policies have begun to receive widespread international attention in the wake of a recent crackdown on purported “illegal” residents in the Indian state of Assam, which is located in the far northeastern corner of the country. Sharing borders with Bhutan, Bangladesh, Myanmar, and a few other small Indian states, Assam is connected to the rest of the Indian mainland only by a narrow strip of land. Here, the process of identifying and removing ‘irregular Bangladeshis’ has gained considerable momentum as the state updates its ‘National Registry of Citizens,’ which threatens millions of Assam residents with imminent statelessness, in particular Bengali-speaking Muslims who have been targeted as part of a Bharatiya Janata Party (BJP)-led campaign against Muslim-majority and Bengali-speaking Bangladeshis, including many who were born in India but lack documentation.” (For more on detention in Assam during the pandemic, see our 10 April update.)

Indian law does not distinguish between refugees and illegal immigrants and the central government grants asylum and provides assistance only for certain refugee populations. India is nonetheless host to a large population of refugees and the Government allows UNHCR recognised refugees to apply for visas.

The country has set up quarantine facilities for those returning from abroad. However, it has been reported that these facilities have poor hygiene levels and limited access to healthcare. People who arrived at New Delhi airport in March reported that after being screened at the airport, they were loaded into a bus packed with other passengers who had travelled from abroad and sent to an isolation facility in Dwarka. In that facility, more than 40 people were held with only three washrooms and three bedrooms. Similar reports arose from quarantine facilities in Kashmir where around 1,800 people were placed in similar facilities. One person who was quarantined in Kashmir stated that authorities had not provided them with liquid soaps and sanitisers and that they were forced to use a dirty washroom.

People detained in prisons, correctional homes, or immigration detention centres are at high risk owing to the closed setting and proximity in common living space. In India, this risk was acknowledged by the Supreme Court on 16 March: “The bitter truth is that our prisons are overcrowded, making it difficult for prisoners to maintain social distancing. … like any other viral diseases susceptibility of Covid-19 is greater in over-crowded places, mass gatherings, etc. Studies indicate that contagious viruses like Covid-19 proliferate in closed spaces such as prisons. Studies also suggest that prison inmates are highly prone to contagious viruses. The rate of ingress and egress in prisons is very high, especially since persons (accused, convicts, detenues etc.) are brought to the prison on a daily basis. Apart from them, several correctional officers and other prison staff enter the prison regularly, and so do visitors (kith and kin of prisoners) and lawyers. Therefore there is a high risk of transmission of Covid-19 virus to the prison inmates… we are of the opinion that there is an imminent need to take steps on an urgent basis to prevent contagion of Covid-19 virus in our prisons.”

On 11 May 2020, the National Commission for women announced that more than 1,700 women on remand had been released since 25 March. On the next day, the High Power Committee appointed for the emergency release on parole or bail of prison inmates, decided to release around 17,000 out of 35,239 prisoners from prisons in the state of Maharashtra. In the whole of India, 61,100 prisoners have been released. However, these releases have not necessarily included detained foreign nationals - rising numbers of whom are being held in Indian prisons. In the state of Odisha for example, where almost one thousand prison inmates have been released, the group of persons denied release include those convicted for rape and sexual offences, and foreign nationals. Similar guidelines are also in place in Jammu and Kashmir.

As of 19 May 2020, 388 positive cases of Covid-19 have been identified among prisoners and three prisoners have died from the disease.

In the Indian state of Assam, more than 800 persons are being held indefinitely in six detention centres within prisons. Defined by Indian authorities as “foreigners,” these detainees - many of whom are Indian citizens who have been declared “illegal immigrants” by the Foreigners Tribunal on account of poor documentation or poor legal assistance and lack of resources - are forced to live in overcrowded facilities that lack appropriate medical and sanitary facilities. Since 2016, 29 detainees have died due to various ailments - ten of them between 1 March 2019 and 20 February 2020.

On 23 March, India’s Supreme Court ordered all states to release “convicts and undertrials [remand prisoners] awaiting trial for offences entailing a maximum sentence of seven years.” While Assam state took steps to release over 700 prisoners, no such steps seem to have been taken to release or protect detained “declared foreigners”. Speaking to Al Jazeera, the deputy commissioner of Assam’s Sonitpur district stated, “We have stopped taking in new inmates. Everyone is being screened by the doctors on a regular basis and there does not seem to be any such possibility of a virus outbreak.” However, reports from detainees’ families suggest otherwise: according to the daughter of one detainee, at least 50 people are kept in one room.

Some families have sought to secure bail for detainees, but with courts suspending operations in March, there is uncertainty regarding options. On 7 April, the country’s Supreme Court heard a petition filed by a detainee in Assam, which sought the release of people who have spent more than two years in detention. The court also heard pleas by the Justice and Liberty Initiative (JLI), which urged authorities to extend the prisoner release to declared foreigners. Further hearings are scheduled for 13 April. “As human beings, they also have at least basic human rights to live and not to die of COVID-19 in the precincts of a prison, which has despicable living conditions,” said a JLI advocate.

Concerns have also been raised concerning persons confined in India’s network of prisons, where measures such as the cancellation of visits prompted some prisoners to riot. Although some have been released since the Supreme Court’s order on 23 March, others remain in facilities renowned for their poor living conditions. Foreigners are amongst those detained inside Indian prisons, however the GDP has not been able to determine whether they were amongst those released. Arundhati Roy, Professor Gilbert Achcar, and other leading intellectual figures signed an appeal urging for authorities to release political prisoners, who were not included in the 23 March order. They note that many persons who have been arbitrarily detained have been in prison for years awaiting trial and, as a result of prolonged confinement, suffer from a wide array of health conditions which leave them particularly vulnerable to the virus. Similar concerns could be expressed for immigration detainees, many of whom have been subjected to lengthy detention.

Is the NHRI Recognised as Independent by the Global Alliance of National Human Rights Institutions?

Is There a Publicly Accessible Official List of Currently Operating Detention Centres?

Does the Country Provide Annual Statistics of the Numbers of People Placed in Migration-Related Detention?