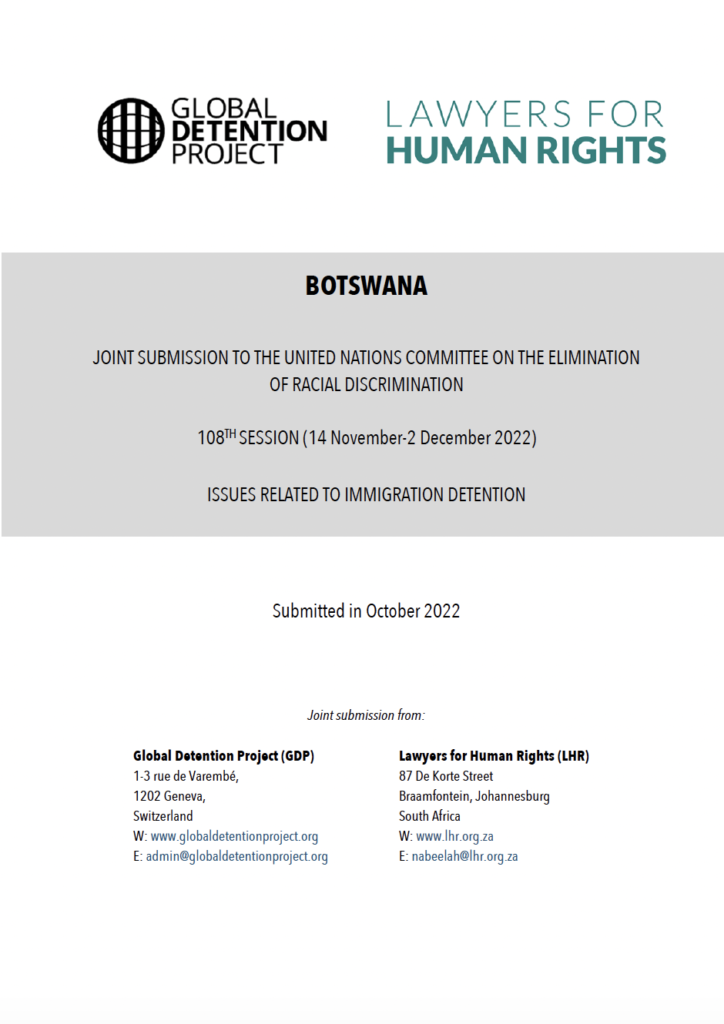 This submission focuses on human rights concerns relating to Botswana’s immigration enforcement policies and practices, with a focus on detention and the treatment of at-risk groups. In particular, it examines the discriminatory treatment and detention of non-citizens (migrants, refugees, and asylum seekers) on the basis of their race, colour, nationality, and/ or ethnic origin, in the context of Botswana’s obligations under the ICERD and the General Recommendations of the CERD. It is based  on research undertaken by LHR and an interview conducted by LHR with a partner organisation in Botswana—the Botswana Network on Ethics, Law and HIV/AIDS (BONELA).[2]

Botswana acceded to the ICERD on 20 February 1974.[3] Pursuant to Article 5 of the ICERD, State Parties to the ICERD undertake to “prohibit and to eliminate racial discrimination in all its forms and to guarantee the right of everyone, without distinction as to race, colour, or national or ethnic origin, to equality before the law” in order to enjoy the rights listed therein, including the “right to freedom of movement and residence within the border of the State”[4] and “the right to leave any country, including one’s own, and to return to one’s country.”[5]

CERD “General Recommendation No.22: Article 5 and refugees and displaced persons,”[6] emphasises that in respect of State Parties’ obligations in terms of Article 5:

CERD General Recommendation No. 30 on Discrimination Against Non-Citizens[8] also makes certain recommendations to State Parties as they relate to non-citizens, including a recommendation to “ensure the security of non-citizens, in particular with regard to arbitrary detention, as well as ensure that conditions in centres for refugees and asylum seekers meet international standards.”[9]

It must be noted, however, that Botswana has made several reservations to the 1951 Convention on the Status of Refugees and its 1967 Protocol Relating to the Status of Refugees. These include reservations in respect to access to freedom of movement and wage-earning employment, and are given effect to in Botswana’s domestic laws as set out below.[10]

3.1. The Constitution of Botswana

The Constitution of 1966 (as amended) is the supreme law in Botswana.[11] Generally, the rights afforded under the Constitution are afforded to every person in the country. However, it is important to note there are some specific rights that are only afforded to Batswana.  These rights include the rights to move freely within Botswana, reside in any part of Botswana, and to leave Botswana.[12] This is contrary to the general non-discrimination principles underscored in the ICERD and specifically to Article 5, which provides for equal rights without discrimination, including rights to freedom of movement.

Chapter II Section 15 of the Constitution sets out protection from discrimination. According to sections 15(1) and (2) of the Constitution, “no law shall make any provision that is discriminatory either of itself or in its effect” and “no person shall be treated in a discriminatory manner by any person acting by virtue of any written law or in the performance of the functions of any public office or any public authority.” Section 15(3) defines “discriminatory” as “affording different treatment to different persons, attributable wholly or mainly to their respective descriptions by race, tribe, place of origin, political opinions, colour, creed or sex whereby persons of one such description are subjected to disabilities or restrictions to which persons of another such description are not made subject or are accorded privileges or advantages which are not accorded to persons of another such description.”

However, Section 15(4) states that laws related “to persons who are not citizens of Botswana” are not subject to the non-discrimination provisions stipulated in Section 15(1).

3.2. The Immigration Act and the Refugees (Recognition and Control) Act

The key provisions regulating administrative immigration-related detention in Botswana are provided in the Immigration Act [25:04] of 1966 (Immigration Act), the Refugees (Recognition and Control) Act [25:03] of 1968 (Refugees Act),[13] the Prisons (Centres for Illegal Immigrants) Regulations, and the Prisons (Declaration of Prisons) Order SI 32 of 2002.

Most recently, the Committee against Torture (CAT) noted its concern that the Refugees Act does not provide the right to legal representation during the refugee status application process.[16]  Furthermore, the CAT was also concerned by the fact that persons of concern could not participate meaningfully in the Minister of Justice’s decision-making process regarding the recommendations of the Refugee Advisory Committee or to appeal decisions to an independent authority.

Law enforcement must ensure that the recommendations in Section V of CERD’s General Comment No.30 are adhered to within the administration of justice. In particular, detained non-citizens must be properly protected in domestic law, and the state must comply with international human rights, refugee, and humanitarian law. Furthermore, when it comes to the expulsion and deportation of non-citizens, state parties hold an obligation under Section VI, Article 25, to “ensure that laws concerning deportation or other forms of removal of noncitizens from the jurisdiction of the State party do not discriminate in purpose or effect among non-citizens on the basis of race, colour or ethnic or national origin, and that non- citizens have equal access to effective remedies, including the right to challenge expulsion orders, and are allowed effectively to pursue such remedies.”[17]

4. TREATMENT OF REFUGEES, ASYLUM SEEKERS AND MIGRANTS IN BOTSWANA

4.1 Places and Conditions of Detention

Non-citizens are detained at two key sites in Botswana—theFrancistown Centre for Illegal Immigrants (FCII) and Dukwi Refugee Camp. The FCII is designated specifically for detaining and processing asylum and immigration claims by individuals who enter the country without authorisation.

Both sites have been subject to repeated criticisms—including from UN Human Rights Committee,[18] the UN Working Group on Arbitrary Detention,[19] and the CAT.[20] Key concerns include:

The law’s unequal application to migrants is best illustrated by the case of Sefu and Others v The Attorney General of Botswana.[21] The petitioners—nationals of the Democratic Republic of Congo—were moved from Dukwi Refugee Camp to FCII on 30 March 2005, and alleged that their detention was due to a suspicion that they had committed a criminal offence. Petitioning the court to be released on bail, they also requested that the court rule that their detention for more than 48 hours without a warrant was unlawful. However, owing to the migrants’ undocumented status, the court found their detention to be lawful under section 14 of the Immigration Act.

Treatment during COVID-19: Law enforcement officials are reported to have been particularly harsh in their arrest, detention, and treatment of refugees and migrants. This was particularly exacerbated during the COVID-19 lockdown period in 2020/2021. In one case, the Bazezuru—a tribe of Shona-speaking individuals who reside in both Zimbabwe and Botswana)—were attacked in an episode of police brutality. The group were in their home when police entered and attacked them under the guise of attempting to ensure they follow COVID-19 protocols.[22] They were housed in a cell for the night and were not provided with adequate medication, a direct contravention of CERD’s General Recommendation No. 30 on Discrimination Against Non-Citizens to “ensure the security of non-citizens, in particular with regard to arbitrary detention, as well as ensure that conditions in centres for refugees and asylum seekers meet international standards.” Migrants were also often placed under harsher scrutiny, illustrating further discriminatory practices and stigma of law enforcement based on the ethnic and national origin of non-nationals in Botswana.[23]

Generally, access to socio-economic relief was inadequate for migrants, refugees, and other marginalised groups during COVID-19 with food hampers being limited to citizens. Sex workers and migrants detained in Francistown could not sustain themselves and local civil society organisations, such as BONELA, had to assist in distributing food hampers to non-citizens that were not supported by the government.[24]

In relation to health care, COVID-19 vaccinations were not accessible to undocumented migrants in Botswana, even though it was stated that vaccinations would be available for all persons.[25] This discrimination based on nationality is in contradiction to Article 5 (d) of ICERD which provides the right to public health, medical care, social security and social services.

Stigma and discrimination between service and health care providers is also prevalent in detention centres. There have been reports of discriminatory treatment of non-citizen sex workers detained at the FCII, who were mostly Zimbabwean nationals. It was reported that this group was not provided with assistance for their personal hygiene needs i.e., menstrual support or adequate access to justice, as they were often detained without any formal charges.[26] The safety and security of refugee women is a further matter of concern as sexual abuses and coercion has also been reported at FCII. Migrant, refugee, and stateless women waiting to be deported at FCII are often abused by police officials who request sexual favours in exchange for food. It has been noted that non-citizen women in detention are more likely to be the targets of sexual abuse than citizens of Botswana.[27] Migrant and refugee women’s access to adequate justice and reform in detention centres is both lacklustre and harmful towards their bodily autonomy and need to be placed in line with the safety recommendations in Section V of General Comment No 30 of CERD, whereby state parties must ensure that non-citizens who are detained are properly protected in domestic law and that it complies with international human rights, refugee, and humanitarian law.

5. PREVIOUS CONCLUDING OBSERVATIONS OF THE COMMITTEE ON THE ELIMINATION OF RACIAL DISCRIMINATION

The CERD considered the combined fifteenth and sixteenth periodic reports of Botswana, held on 20 February – 10 March 2006 and made certain concluding observations following this.[28] The following recommendations and concerns are still pertinent today:

Based on the above, the following issues have been highlighted as areas for concern that the CERD should consider when making recommendations to Botswana:

[6] UN Committee on the Elimination of Racial Discrimination (CERD), “General Recommendation No. 22: Article 5 and refugees and displaced persons,” 24 August 1996, available at: https://www.refworld.org/docid/4a54bc340.html

[11] The 1966 Constitution of Botswana, which was amnded in 2016, is currently under a constitutional review process. See: ConstitutionNet, “Promise Fulfilled? Botswana’s First Comprehensive Constitutional Review Process Gets Underway,” 25 February 2022, https://constitutionnet.org/news/promise-fulfilled-botswanas-first-comprehensive-constitutional-review-process-gets-underway

[13] In the Second Periodic Report submitted by Botswana to the Human Rights Committee, it reported that the Attorney General’s Chambers was currently drafting an updated Refugee Recognition and Control Bill. The Human Rights Committee recommended that Botswana ensure that this Bill is fully compliant with all international standards, including the ICCPR; provides for adequate safeguards against arbitrary detention, deportation and refoulment; and that the Botswanan government continued to cooperate and engage with the Office of the UN High Commissioner for Refugees during all stages of the drafting process. See: Human Rights Committee, “Concluding observations on the second periodic report of Botswana,” 24 November 2021, https://documents-dds-ny.un.org/doc/UNDOC/GEN/G21/352/66/PDF/G2135266.pdf?OpenElement

[14] Subsection 1 of the Immigration Act.

[15] Subsection 2 of the Immigration Act.

[19] Working Group on Arbitrary Detention, “Preliminary Findings from its visit to Botswana (4 to 15 July 2022),” https://www.ohchr.org/sites/default/files/documents/issues/detention/wg/country-visit/2022-07-15/PreliminaryFindings_Botswana_15_June.docx