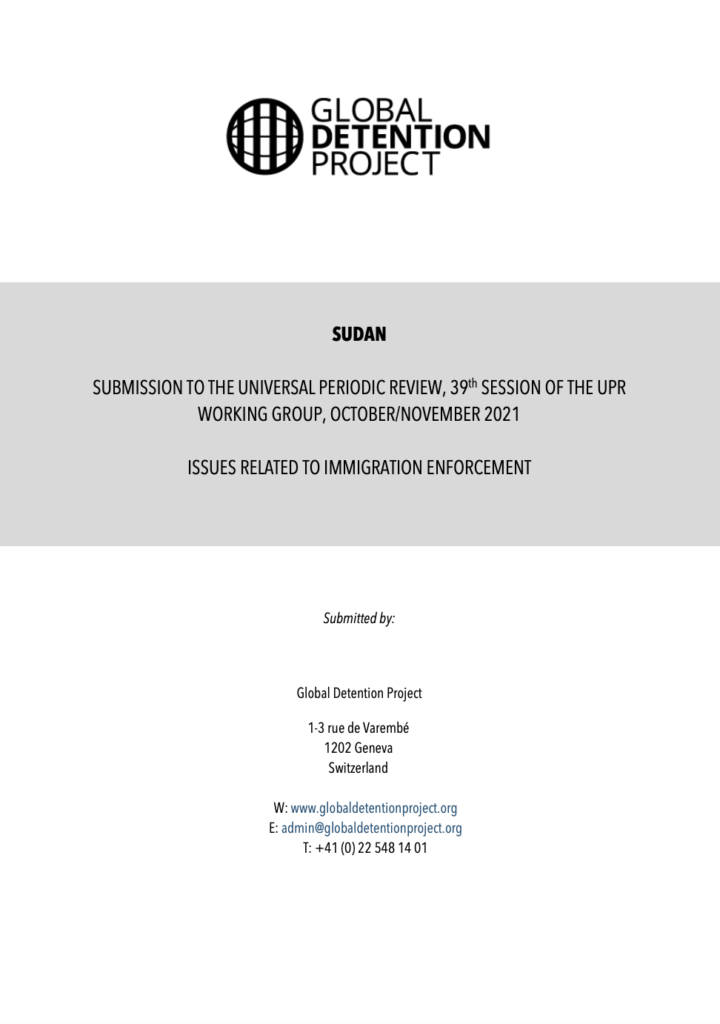 This submission has been prepared by the Global Detention Project (GDP) for the third cycle of the Universal Periodic Review (UPR) of Sudan in November 2021.

Sudan is both a country of origin and a host country for migrants and refugees. It also has a very large population of internally displaced people (IDPs), who number more than 2.5 million. According to UNHCR, as of 31 January 2021, there were 1,074,527 refugees and asylum seekers in the country—30 percent settled in camps, and 70 per cent out of camps—the majority of whom are from South Sudan.[i]

The outbreak of conflict in conflict in Ethiopia’s Tigray region in November 2020 has severely aggravated the humanitarian situation in Sudan as tens of thousands of Ethiopian refugees have fled the region and crossed into Sudan.[ii] According to UNHCR, in just one day in November 2020, some 5,000 refugees arrived at the country’s border provinces of Kassala and al-Qadarif.[iii] According to the Mixed Migration Centre (MMC), “Over 56,000 Ethiopian refugees have crossed into Sudan between November 2020 and January 2021.”[iv] UNHCR’s Principal Emergency Coordinator in Sudan, commented: “It’s located in such a remote area and it has been challenging to upgrade facilities to minimum standards.” According to the MMC, “While efforts have been made to move refugees away from the border to camps further into Sudan, UNHCR reports many refugees prefer to remain near the border crossings to wait for family members still in Ethiopia, or to be able to return home soon.”[v]

With growing numbers of arrivals, shelters and reception capacity are under increasing pressure and authorities are facing a rush to identify and provide more sites. A transit centre in Hamdayet, which has capacity for 300 people, was reported in November 2020 to be hosting 12,000.[vi] In addition, several thousand people have been placed in the Um Rakouba (Um Raquba) refugee camp, but authorities are struggling to provide sufficient services.[vii] The MMC reports that “there have been concerns over the spread of the COVID-19 virus, with the border transit camps lacking sufficient WASH structures (WHH) and capacity for testing and adequate protection equipment (UNHCR). To ease the pressure on these transit camps, relocations were carried out at the end of 2020 and early 2021 to Umraquba and Tunaydbah refugee camps, located further inland Sudan. Both are camps first setup in the 1980s to host Ethiopian refugees then driven out of the country by famine. The camps are expected to host around 20,000 Ethiopian refugees.”[viii]

Sudan maintains a reservation on Article 26 of the UN Refugee Convention (Article 26 provides for refugees’ freedom of movement and the ability to choose their place of residence) and requires refugees to stay in designated camps. However, 76 per cent of South Sudanese refugees live in the local community in urban and rural areas. Refugees that leave camps without permission are subject to fines and are returned to the camps, while those apprehended in urban areas face arrest and detention if they lack valid identification cards. The U.S. State Department estimates that each month, 150 to 200 refugees and asylum seekers are detained in Khartoum.[ix]

According to Article 31(3) of Sudan’s Asylum Regulation Act of 2014[x] “a refugee shall be deemed to have committed a contravention, and shall be punished, with such fine, as may be specified by the court (…) where he: (a) departs from such place, as may have been specified, for his residence, without permission; (b) does not hold a valid asylum card.” Moreover, Article 29 of the same Act specifies that “no penalties, by reason of the unlawful entry, or presence, shall be inflicted on asylum seekers, who directly have come from such territories, as therein their life, or freedom is in danger, and who enter, or are present on Sudanese lands; on condition that they shall present themselves, within one month, to the nearest Commission office, of government authority, and have good cause for their unlawful entry or presence.”

In a joint submission to the 2nd cycle of the Universal Periodic Review of Sudan, a group of civil society organisations highlighted that while the Act strengthened legal protection for refugees and individuals in need of international protection, law enforcement and judicial authorities did not consistently apply the new provisions.[xi] UNHCR has expressed concern about forced returns and refoulement cases in Sudan, including incident where Eritreans have been sent back through the Laffa border crossing point after having been convicted on charges of illegal entry. The asylum seekers were not given access to asylum procedures and their deportations amounted to refoulement, thus constituting serious violations of the 1951 Refugee Convention and the Sudanese Asylum Regulation Act.[xii]

Reports in the past have indicated that the country uses prisons for the detention of non-nationals for migration-related reasons, as well as ad hoc immigration detention facilities. For example, in September 2017, local media reported that 36 Eritrean refugees had served two-month prison sentences for “illegal infiltration into the Sudanese territory,” prior to their deportation.[xiii] The U.S. State Department, UNHCR, and media outlets have also referred to immigration detention facilities, including an “Aliens Detention Centre” in Khartoum. The GDP has not been able to identify the exact locations of these facilities or verify if they remain in use.[xiv]

In 2016, German media (Spiegel and Report Mainz) obtained documents that showed that EU efforts to curb migration in the country focused on policing the border with Eritrea, and included plans to establish two camps with detention rooms in Gadaraf and Kassala.[xv] Although the German Ministry of Economic Cooperation and Development reported that these plans were binding, the SOAS Centre for Human Rights Law later reported that the plans had been dropped following widespread criticism.[xvi] To-date, the GDP has been unable to independently verify the status of these plans.

Observers have expressed concerns that EU funds provided to Sudan for migration-management purposes (including as part of the Emergency Trust Fund for Africa and other projects supporting the EU-Africa Khartoum Process) have been used in activities involving severe human rights violations. In 2016, these concerns became acute in the wake of reports that the RSF paramilitary force (Rapid Support Force, an outgrowth of the notorious Janjaweed militia), which had been hired to curb migration using EU funds, had been involved in the arrest and deportation of hundreds of Eritrean refugees and asylum seekers, including along the border with Libya to implement migration-control activities developed in the scope of the Khartoum Process.[xvii] In March 2019, funding for the EU’s “Better Migration Management” project in Sudan—which supported the training of border control forces and policies—was suspended amid fears that the funds were being used to fund the security forces, including the RSF, responsible for violently suppressing peaceful protests. However, as of July 2020, the programme appeared to have resumed.[xviii]

Prison conditions also remain an issue of concern and the U.S. State Department has described them as “harsh and life threatening, overcrowding was a major problem.”[xix] The COVID-19 pandemic has exasperated these concerns. The African Centre for Justice and Peace Studies and the World Organisation Against Torture (OMCT) stated that “detainees are also forced to live in inhumane conditions, including rudimentary infrastructures, overcrowded cells, insufficient ventilation, no proper nutrition or hygiene. These conditions have particularly been highlighted in the pandemic context which has exacerbated the vulnerability of inmates.”[xx] In April, the International Committee of the Red Cross installed 83 hand washing stations in around 10 prisons, distributed 10,700 soap bars to detainees, and also provided gloves and masks to 11 detention facilities.[xxi]

3. RECOMMENDATIONS DURING THE 2ND CYCLE OF UPR

During the 2nd cycle of the Universal Periodic Review (UPR) of Sudan (33rd session, April/May 2016) Sudan agreed to examine several recommendations relevant to its immigration and refugee laws and policies.[xxii] These included:

4. RECOMMENDATIONS FROM OTHER HUMAN RIGHTS BODIES

In 2019, the UN Human Rights Committee recommended that “the State party should take the steps necessary to protect the rights of asylum seekers and refugees under the Covenant and other international standards, including by ensuring that all persons seeking asylum have the right to apply for asylum, to an individualised assessment of their asylum claims, to appeal and to effective protection against non-refoulement. It should refrain from conducting, under any circumstances, collective expulsions of migrants and asylum seekers.”[xxiii]

In its concluding observations of 2010, the Committee on the Rights of the Child recommended that Sudan “amend the Asylum Act in accordance with international refugee law and include specific refugee status determination procedures and measures to address the specific needs of asylum-seeking children. The State party should ensure, particularly, that the principle of non-refoulement is respected in all decisions with respect to asylum-seeking children. The Committee encourages the State party to seek technical assistance from UNHCR in this regard.”[xxiv] The Committee also recommended that the State party “(c) Consider ratifying the 1954 Convention Relating to the Status of Stateless Persons and the 1961 Convention on the Reduction of Statelessness.”[xxv]

Since the second cycle of the UPR (33rd session, April/May 2016), Sudan has yet to ratify the Convention against Torture and Other Cruel Inhuman or Degrading Treatment or Punishment or to ratify the International Convention on the Protection of the Rights of All Migrant Workers and Members of their Families. There are on-going concerns about the treatment of refugees and asylum seekers. There have been cases where asylum seekers were not given access to asylum procedures and have been deported back to their countries of origin without appropriate consideration. There are on-going concerns about how EU funding for migration-management projects may be diverted into activities that violate the rights of refugees. There is very little publicly available information concerning where refugees may be held when they are taken into custody, the status of various detention centre projects that had been slated for funding by the EU, or the extent to which migrants and refugees are detained.

With the outbreak of conflict in neighbouring Tigray region in Ethiopia, all of the above-mentioned concerns take on new urgency.

We call on the Sudanese Government to:

[xiv] K. Siegfried, “Sudan and Eritrea Crackdown on Migrants Amid Reports of EU Incentives,” The New Humanitarian, 25 May 2016, https://www.thenewhumanitarian.org/fr/node/256247

[xv] Spiegel, “EU to Work with African Despot to Keep Refugees Out,” 13 May 2016, www.spiegel.de/international/world/eu-to-work-with-despot-in-sudan-to-keep-refugees-out-a-1092328.html

[xix] K. Siegfried, “Sudan and Eritrea Crackdown on Migrants Amid Reports of EU Incentives,” The New Humanitarian, 25 May 2016, https://www.thenewhumanitarian.org/fr/node/256247

[xx] ACJPS and OMCT, “Post COVID-19 Era in Sudan: The Urgency to Unravel the Torture and Inhuman Treatments System One Year After the Transition,” July 2020, https://www.omct.org/files/2020/07/25966/briefing_paper_on_torture_in_sudan.pdf

[xxiv] Committee on the Rights of the Child, “Consideration of Reports Submitted by States Parties under Article 44 of the Convention: Concluding Observations: Sudan,” CRC/C/SDN/CO/3-4, 22 October 2010, para. 69, https://tbinternet.ohchr.org/_layouts/15/treatybodyexternal/Download.aspx?symbolno=CRC%2fC%2fSDN%2fCO%2f3-4&Lang=en

[xxv] Committee on the Rights of the Child, “Consideration of Reports Submitted by States Parties under Article 44 of the Convention: Concluding Observations: Sudan,” CRC/C/SDN/CO/3-4, 22 October 2010, para. 71, https://tbinternet.ohchr.org/_layouts/15/treatybodyexternal/Download.aspx?symbolno=CRC%2fC%2fSDN%2fCO%2f3-4&Lang=en