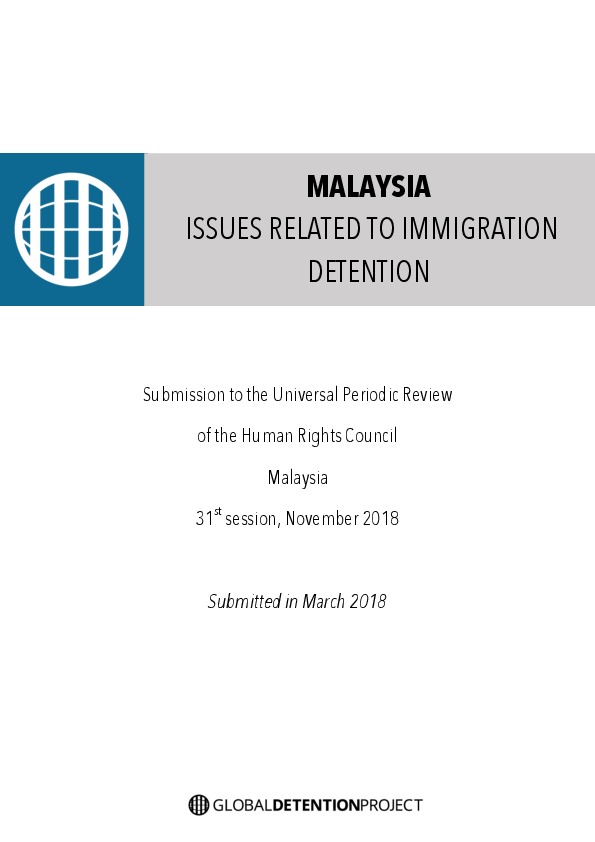 of the Human Rights Council

The Global Detention Project (GDP) is an independent research centre based in Geneva that investigates the use of detention as a response to international migration. Its objectives are to improve transparency in the treatment of detainees, to encourage adherence to fundamental norms, to reinforce advocacy aimed at reforming detention practices, and to promote scholarship and comparative analysis of immigration control regimes.

As per the GDP’s mandate, this submission focuses on Malaysia’s laws and practices concerning detention for immigration-related reasons. It is based on GDP research as well as research findings from GDP partners, other stakeholders and official Malaysian institutions.

Malaysia is a magnet for migrants and asylum seekers despite its poor human rights record and failure to ratify pivotal human rights treaties including the two International Covenants (on civil and political rights and economic, social and cultural rights) and the Convention against Torture and its optional protocol allowing monitoring visits to places of detention. Illegal entry and stay is criminalized and migrants often serve prison sentences before being transferred to one of 13 to 17 dedicated immigration centres dubbed “immigration depots” while awaiting deportation. According to statistics from the Malaysian government’s Enforcement Agency Integrity Commission (EAIC), 86,795 people were placed in immigration detention in 2016, mainly from South East Asia. Although the government does not produce disaggregated gender-related data numerous women are likely to be in immigration detention as they represented 44.2 percent of migrants and refugees in Malaysia in 2017.[1] There are many reports that documented and undocumented women migrants, refugees and asylum seekers are unprotected and vulnerable to abuse.[2]

According to UNHCR 5,648 asylum-seekers and 2,282 refugees were detained in 2015 and faced prosecution for immigration-related purpose.”[3] Malaysia is not a signatory to the Convention Relating to the Status of Refugees and asylum-seekers and refugees are not protected against arbitrary detention. There are also reports that potential trafficking victims may be charged with immigration offences and detained in the criminal justice system due the lack of formal victims identification procedures. [4]

Section 34(1) of the Immigration Act provides that people may be detained for “such period as may be necessary” pending removal.

Procedural standards are very poor; immigration detainees are rarely informed of the reasons for detention in a language they understand; and detainees have scant access to legal counsel. There are no alternatives to immigration detention. Some UNHCR refugee card holders detained in immigration depots can be released subject to the government’s discretion but the UN refugee agency only has access to them after they are transferred to the depots from prisons where they first serve immigration related sentences. According to UNHCR refugees can be in detention for years while waiting to be able to access the UN refugee agency and the average detention period for refugees is 16 months.[5]

According to SUHAKAM, the Human Rights Commission of Malaysia, more than 100 people died in immigration detention in 2015 and 2016.[6] SUHAKAM’s chairman commented, “Many deaths in immigration detention centres were due to chronic health conditions such as tuberculosis, pneumonia and septicaemia.” He said, “A clear division of responsibility should be established between the ministries [Home, Finance and Health] which should cooperate in implementing an integrated health policy within immigration detention centres,” adding that Malaysia’s national health policy must be based on the belief that everyone living within our borders has a right to adequate health care.[7]

SUHAKAM has repeatedly highlighted the serious problems relating to places of detention in the country, such as the unacceptable conditions, which fall far short of minimum standards. While detained populations are still predominantly male, more and more women and children are being held in places of detention without many of the necessary changes in infrastructure. SUHAKAM has observed that the growth of the detention population is not accompanied by an increase in the necessary resources such as budget. This has an impact on the entire system, which in turn results in greater pressure on the facility administration and staff.”[8] In October 2017, SUHAKAM’s Chairman, Razali Ismail said that “annual financial plan scheduled to be tabled by Prime Minister Najib Razak in the Dewan Rakyat on Oct 23 must be a human rights-based national budget”, including provisions for the proper “management of detention including infrastructure, nutrition, health and safety, appointments of medical doctors at every facility, as well as sanitation.”[9]

The independent national human rights institution has denounced dire conditions and overcrowding for many years. In its 2016 Annual Report it stated “Detainees, particularly those in immigration detention centres live for long periods in overcrowded cells without enough room to move or to sleep. Further, being confined in a small space, often in insanitary conditions makes deprivation of liberty more challenging. Not only is the human dignity aspect of detainees eroded, but their mental, emotional and physical health sometimes deteriorates further.”[11] In particular, following visits to places of detention in 2016, SUHAKAM denounced the dilapidated conditions at the Juru Immigration Detention Centre and Pekan Nenas Immigration Detention Centre. The Public Works Department also acknowledged that many parts of the Pekan Nenas centre were “unfit and unsafe to be occupied” including the female block.

Another Malaysian oversight body, the Enforcement Agency Integrity Commission (EAIC), has also denounced conditions in detention, including overcrowding, and poor conditions of hygiene. Although government statistics on deaths in detention were not disaggregated, women are also reportedly dying in detention, and not only because of health and overcrowding conditions. EAIC commented on allegations from Cambodian women detained in January 2016 who” had claimed to have witnessed physical abuse of detainees at the Juru detention centre [… and] alleged that three women had died at the centre due to the purported “torture”, while another four female detainees died at a hospital. The Immigration Department’s Director-General stated in August 2016 that the death of abuse were “untrue” according to a preliminary.”[12] In May 2017 the Immigration Department launched an investigation into allegations of “torture-like” conditions and allegations that guards frequently beat detainees, in immigration detention centres.[13]

Effort to assess the situation in immigration detention in light of international human rights norms and standards should address the following questions:

[10] SUHAKAM, Report on Alternatives to Immigration Detention, November 2013. Available at: