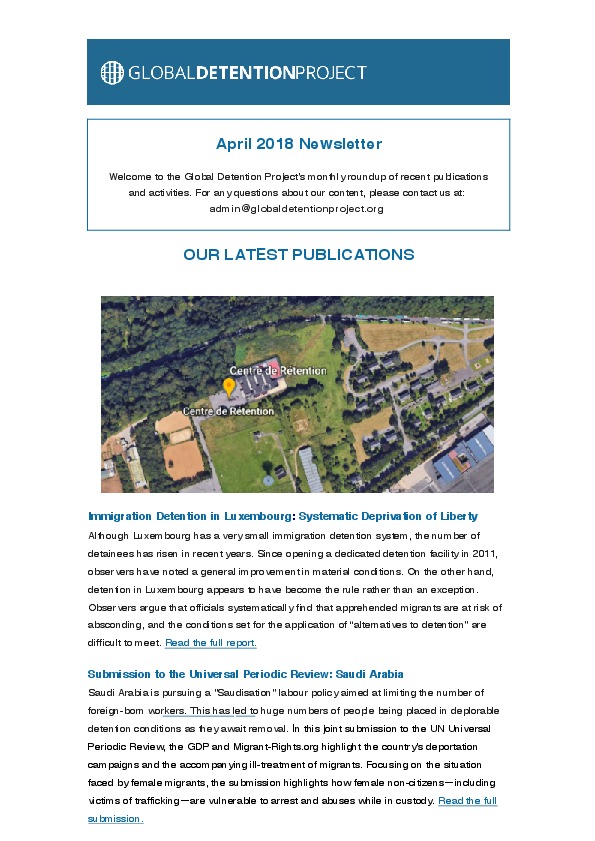 Welcome to the Global Detention Project’s April Newsletter. For any questions about our content, please contact us at:
admin@globaldetentionproject.org

Immigration Detention in Luxembourg: Systematic Deprivation of Liberty
Although Luxembourg has a very small immigration detention system, the number of detainees has risen in recent years. Since opening a dedicated detention facility in 2011, observers have noted a general improvement in material conditions. On the other hand, detention in Luxembourg appears to have become the rule rather than an exception. Observers argue that officials systematically find that apprehended migrants are at risk of absconding, and the conditions set for the application of “alternatives to detention” are difficult to meet. Read the full report.

Submission to the Universal Periodic Review: Saudi Arabia
Saudi Arabia is pursuing a “Saudisation” labour policy aimed at limiting the number of foreign-born workers. This has led to huge numbers of people being placed in deplorable detention conditions as they await removal. In this joint submission to the UN Universal Periodic Review, the GDP and Migrant-Rights.org highlight the country’s deportation campaigns and the accompanying ill-treatment of migrants. Focusing on the situation faced by female migrants, the submission highlights how female non-citizens—including victims of trafficking—are vulnerable to arrest and abuses while in custody. Read the full submission.

Submission to the Universal Periodic Review: Malaysia
Despite its poor human rights record and failure to ratify pivotal human rights treaties, Malaysia is a magnet for migrants and asylum seekers. Every year, tens of thousands are placed in immigration detention in conditions observers have described as “dire” and “unacceptable.” In this submission to the UN Universal Periodic Review, the GDP underscores the appalling detention conditions—including the high death rates amongst detainees—and lists key questions regarding the country’s immigration detention regime and infrastructure that Malaysian authorities should be asked to address. Read the full submission.

The EU Hotspot Approach: Hotspots and Plethora of Freedom-Restricting Measures

This themed blog series, organised by GDP Researcher Izabella Majcher for the Oxford University-based Border Criminologies, examines the EU hotspot approach from the perspective of the right to liberty and freedom of movement. The series, which also includes contributions from experts in Italy and Greece, highlights the unclear division of roles and responsibilities between EU agencies and host member states, the blurred line between detention and reception, substandard material conditions, a lack of transparency, and differential treatment based on nationality, among a host of other concerns. More information is available here.

Thinking Beyond Detention
The GDP’s Michael Flynn participated in the University of Oxford’s Border Criminologies 5th birthday conference—”Beyond Critique.” His presentation, “Between Resistance and Resilience: Challenges and Risks in Moving Beyond Detention Critique,” discussed strategies that different social actors have used in their efforts to challenge and roll back immigration detention. More information about his presentation is available here.

UN Global Study on Children in Detention
On 10-11 April, the GDP’s Mariette Grange attended an expert meeting in Vienna, organised by the Ludwig Boltzmann Institute of Human Rights, to discuss methods and approaches for carrying out the UN Global Study on Children in Detention. The GDP has been active in providing the Global Study team with models for developing online data development tools and advising on issues specifically related to the immigration detention of children. More information is available here.

“Mexico and Somalia: Visas and Permits Issued to Somali Citizens to Transit Through Mexico,” Immigration and Refugee Board of Canada, March 2018.

“Migration and Data Protection: Doing No Harm in an Age of Mass Displacement, Mass Surveillance and “Big Data”,” B. Hayes, International Review of the Red Cross, March 2018.