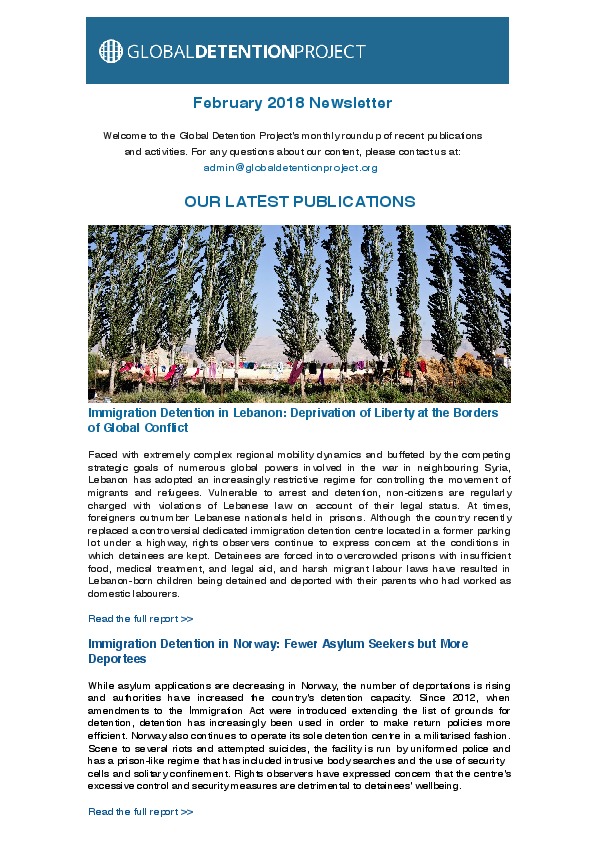 Welcome to the Global Detention Project’s February 2018 Newsletter. For any questions about our content, please contact us at: admin@globaldetentionproject.org

Immigration Detention in Lebanon: Deprivation of Liberty at the Borders of Global Conflict

Faced with extremely complex regional mobility dynamics and buffeted by the competing strategic goals of numerous global powers involved in the war in neighbouring Syria, Lebanon has adopted an increasingly restrictive regime for controlling the movement of migrants and refugees. Vulnerable to arrest and detention, non-citizens are regularly charged with violations of Lebanese law on account of their legal status. At times, foreigners outnumber Lebanese nationals held in prisons. Although the country recently replaced a controversial dedicated immigration detention centre located in a former parking lot under a highway, rights observers continue to express concern at the conditions in which detainees are kept. Detainees are forced into overcrowded prisons with insufficient food, medical treatment, and legal aid, and harsh migrant labour laws have resulted in Lebanon-born children being detained and deported with their parents who had worked as domestic labourers. Read the full report >>

While asylum applications are decreasing in Norway, the number of deportations is rising and authorities have increased the country’s detention capacity. Since 2012, when amendments to the Immigration Act were introduced extending the list of grounds for detention, detention has increasingly been used in order to make return policies more efficient. Norway also continues to operate its sole detention centre in a militarised fashion. Scene to several riots and attempted suicides, the facility is run by uniformed police and has a prison-like regime that has included intrusive body searches and the use of security cells and solitary confinement. Rights observers have expressed concern that the centre’s excessive control and security measures are detrimental to detainees’ wellbeing. Read the full report >>

Saudi Arabia: Submission to the UN Committee on the Elimination of Discrimination against Women

Saudi Arabia has long been an important destination for migrant workers—especially from Asia, the Middle East, and the Horn of Africa—who today represent more than a third of the country’s population. More than 30 percent of these workers are women. In this joint submission to the UN Committee on the Elimination of Discrimination against Women (CEDAW), the GDP and Migrant-Rights.org highlight specific discriminatory practices based on gender that lead to the abuse and detention (and frequent abuse in detention) of migrant women because on their immigration status in Saudi Arabia. The submission raises particular concerns over the conditions women face in detention centres, the detention and deportation of trafficking victims, and the failure to enforce legislation preventing employers from retaining workers’ passports. Read the full report >>

European detention practices reflect a variety of policy responses to the growth of the immigration control industry—from the privatisation of the management of entire immigration detention estates to keeping all detention facilities in official hands and employing private non-profit groups. In this chapter for the 2018 Routledge volume Privatising Punishment in Europe? edited by Tom Daems and Tom Vander Baken, the GDP’s Michael Flynn and Matthew B. Flynn and Eryn Wagnon of Georgia Southern University detail the variety of levels and forms of privatisation adopted by EU member states in this area of immigration policy, as well as the challenges that the outsourcing of immigration controls posits. More information about “Privatising Punishment in Europe?” is available here.

First Perspectives on the Zero Draft for the UN Global Compact on Safe, Orderly and Regular Migration

On 5 February 2018, the Zero Draft for a UN Global Compact for Safe, Orderly and Regular Migration was published by the UN Special Representative on Migration. Led by Elspeth Guild (Queen Mary University of London) and Tugba Basaran (Harvard University), 17 expert academics from Europe and North America—including GDP Researcher Izabella Majcher—provided their commentary on the positive and negative aspects of the Objectives, as well as the necessary follow up. Commenting on Objective 21 (“Cooperate in facilitating dignified and sustainable return, readmission and reintegration”), Izabella Majcher argues that the Zero Draft places disproportionate attention on the process of return and post-return reintegration instead of the legal safeguards preventing return. The full commentary is available here.

The Global Detention Project has been deeply involved in civil society efforts to shape discussions on the Global Compact, including providing expert advice to OHCHR in its efforts to develop a set of Principles and guidelines, supported by practical guidance, on the human rights protection of migrants in vulnerable situations, which the High Commissioner for Human Rights references in a recent open letter, urging states “to ensure that this practical guidance is incorporated and operationalized in the global compact.” More information about the GDP’s contributions to the Global Compact discussions is available here.

A new law penalising NGOs working to support the rights of migrants and asylum seekers was recently submitted to the Hungarian Parliament. The bill, which would require NGOs such as the GDP’s partner the Hungarian Helsinki Committee (HHC) to seek permission to perform their ‘basic functions,’ appears to contravene the country’s obligations under international law to protect the right to freedom of expression, association, and movement and could see organisations facing exorbitant fines, suspension, and dissolution. An English translation of the bill, provided by HHC, is available here.