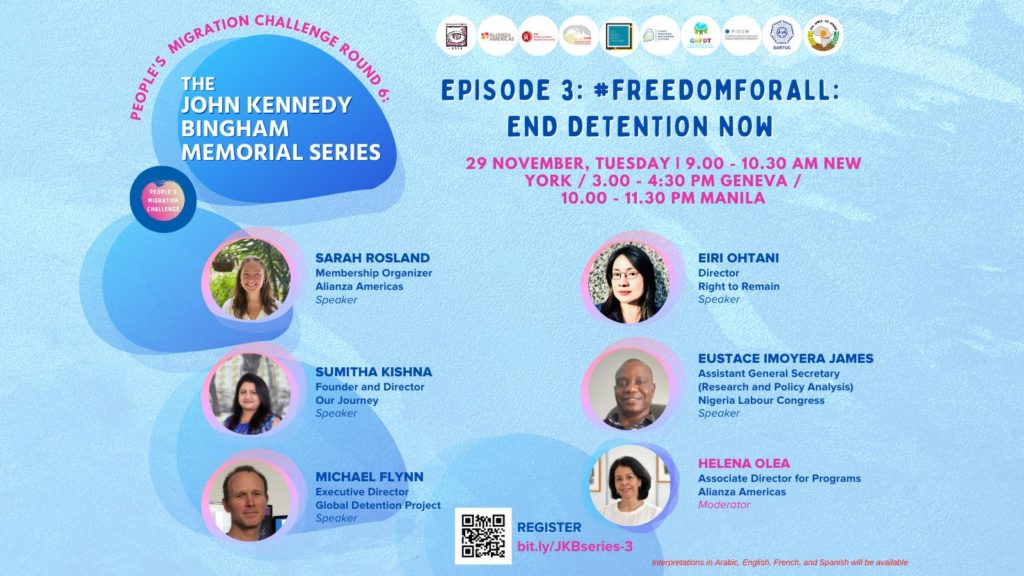 Examining the campaign to end the detention of children, Flynn considered some of the lessons that have been learned from this advocacy effort – in particular, the fact that while there may now be an international acceptance of the norm against child detention, national implementation of this norm has been slow to develop. “One of the lessons of the ending detention of children campaign is that it is going to be very difficult,” he said. “If we can’t get states to stop detaining children, it’s going to be very difficult to end the detention of anyone else. So we need to gradually chip away at the legitimacy of detention.”

Envisioning what this could look like, Flynn proposed initially prioritising calls to protect other acutely vulnerable groups, such as victims of trafficking – “a group of victims who, against their will, have been trafficked into situations that are already extraordinarily harmful but who then, in country after country, are also being detained.”

Highlighting the non-punishment norm, which effectively holds that people who have been trafficked are not to face any form of punishment such as detention or fines, Flynn suggested that global civil society should work to build an evidentiary base of the harms experienced by the group. “Global civil society needs to develop an idea of where it wants to focus its energy, raise issues relentlessly, and identify specific targets of where we can promote this most effectively.”

Flynn’s interventions can be viewed at:

Moderated by Helena Olea (Alianza Americas), the webinar was part of the PMC’s series – “People’s Migration Challenge Round 6: The John Kennedy Bingham Memorial Series” which focuses on current global campaigns, as well as important migration issues to develop joint campaigns around; and to mobilise advocacy for policy change at the international, regional, national, and local levels. More information about the webinar series is available here.

This webinar was recorded, and is available to watch on Youtube in English, French, and Arabic.