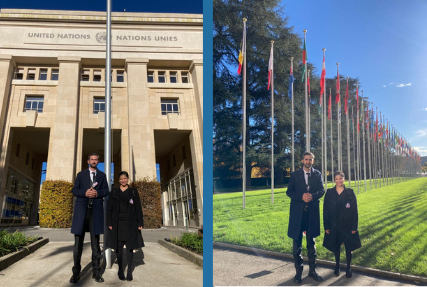 During these meetings, IRRA’s Selim Vatandas took the opportunity to discuss several pressing detention concerns in Türkiye, including:

LHR’s Nabeelah Mia, meanwhile, raised concerns regarding the treatment of migrants, asylum seekers and refugees, including the use of immigration detention, in South Africa. The issues she raised included:

During the visit, Ms Mia also attended the 41st session of the Human Rights Council UPR Working Group, during which South Africa was reviewed. (Previously, LHR and GDP had submitted recommendations to the UPR Working Group regarding South Africa’s detention practices – the full text of which is available here.)

In addition to enabling partners to raise issues of concern, the meetings also provided representatives with an invaluable opportunity to learn more about the operations of the UN human rights system–and how civil society organisations can interact with this system. “Thanks to the GDP, we have gained important experience during one-on-one meetings and deepened our knowledge of UN practices,” said the IRRA’s Mr Vatandas.

Following the visit, LHR’s Ms Mia also reported, “Since our visit, we [LHR] have already made a submission to the Special Rapporteur on Torture for input into her second thematic report. In addition, we have prepared a high-level document on the work of LHR in relation to refugee and migrants rights issues which we will be sharing with the mechanisms and working groups.”

About the Global Immigration Detention Observatory

The Global Immigration Detention Observatory is a collaborative initiative between the Global Detention Project and partner organisations, researchers, and human rights practitioners in every corner of the world whose central objective is to promote immigration detention reforms through rigorous research, data development, analysis, and reporting. The project seeks to ensure that local detention conditions get global attention, while helping inform initiatives at the international level with on-the-ground realities and needs.

At the heart of the Observatory is an online interactive database that serves as a consolidated tool for documenting immigration detention laws, practices, and policies in all countries using a shared, comparative framework that is based on international human rights law. The database is intended to enable advocates and researchers to develop a clear understanding of gaps in countries’ efforts to uphold their human rights commitments, assess how different detention systems compare and contrast, develop data-driven advocacy messages, promote transparency in the treatment of detained migrants and asylum seekers, and produce targeted reports for monitoring bodies operating at both the local and international levels.