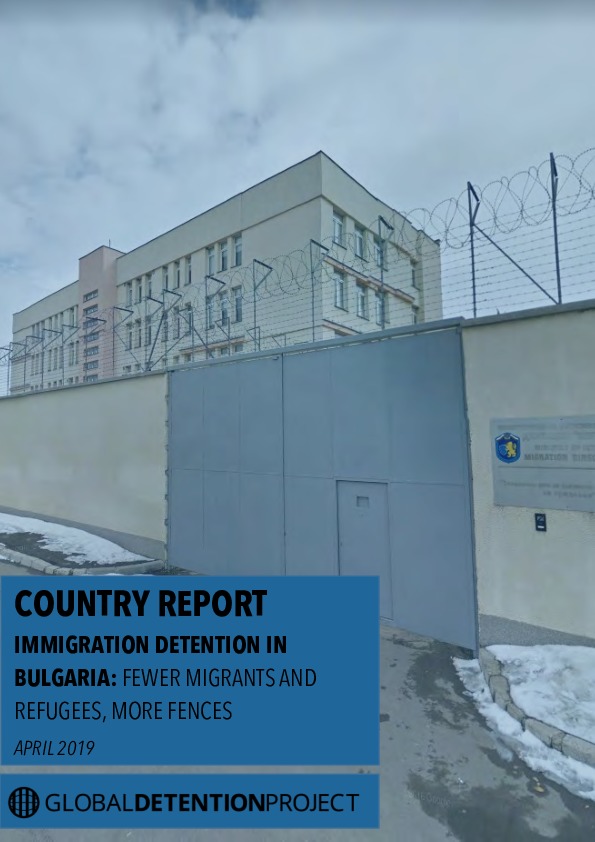 Immigration Detention in Bulgaria (2019 Report): Although the number of irregular non-citizens apprehended in Bulgaria has plummeted in recent years, detention remains a key tool in the country’s response to migration and asylum flows. It has also spent some 85 million EUR to construct a fence along its border with Turkey. Bulgaria’s detention centres reportedly lack appropriate health care services, have substandard conditions, and fail to provide adequate access to procedural guarantees, spurring criticism from civil society organisations and international watchdogs. View the Bulgaria Immigration Detention Profile Page. 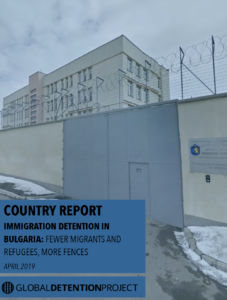 Bulgaria is often viewed as a transit country into the European Union. While it received an important number of arrivals during the refugee “crisis,” the number of irregular non-citizens apprehended in the country has decreased dramatically, including a 90 percent drop between 2015 and 2017. Despite this decrease, immigration detention has remained a key tool in Bulgaria’s response to migration and asylum flows, in addition to other measures such as the construction of a border fence.

A 2019 report on the treatment of asylum seekers in four frontline European Union (EU) countries, which was produced by several European NGOs—including the Global Detention Project (GDP), the Bulgarian Foundation for Access to Rights (FAR), and the Hungarian Helsinki Society (HHC)—found that “Exceptional measures of a temporary character” like mass detention have become “normalised” in Bulgarian public discourse. The report noted the contradictory rationales used to characterise these measures, which are presented as a “humanitarian” response even as officials describe the actions as protecting the public from national security threats.”

In 2018, Bulgaria was one of several central and eastern EU countries that refused to endorse the Global Compact for Safe, Orderly and Regular Migration (GCM). Although the country held the EU presidency for the first time while the GCM was being drafted, the government argued that the non-binding document, which was signed by more than 150 countries, would weaken its ability to control migration.

Bulgaria, which has the lowest gross domestic product per capita in the European Union, has experienced a steady emigration haemorrhage since 1990. Nevertheless, it has spent some 85 million EUR on a razor-wire fence along its south-eastern border to prevent irregular crossings. Construction began in 2014, at the height of the “refugee crisis” when the country was experiencing an influx of Syrian refugees, and was completed in October 2017. Described as a “temporary fence facility” by the government, it stretches for over 236 km along the country’s border with Turkey.

Many migrants, asylum seekers, and refugees have experienced pushbacks back into Turkey, a practice that numerous NGOs have denounced. According to Save the Children, “the largest number of violent pushbacks (involving children in 2018) was reported at the borders between Bulgaria and Turkey (154).” UNHCR has also raised the issue of pushbacks with Bulgarian authorities.

The massive costs associated with building the border fence have also been a source of controversy. In 2017, the Supreme Cassation Court “ordered the State Agency for National Security and the State Financial Inspection Agency to investigate allegations of corruption amongst senior state officials” in relation to the project.

Bulgarian border control has been bolstered by the deployment of the European Border and Coast Guard (formerly Frontex) along its land borders with Turkey and Serbia. In 2017, this was comprised of “126 officers (including crew members of the deployed assets) supported by 6 thermo-vision vehicles, 38 patrol cars, 1 CO2 detector, 39 smartdeck cameras and 3 mobile offices.”

According to reports, certain nationalities of asylum applicants face discrimination in the treatment of their claims in Bulgaria, which observers say is used as a deterrence measure. This would likely amount to a violation of both domestic and international laws. Often held in detention for more than three months while their applications are assessed, asylum seekers from countries like Pakistan, Ukraine, Algeria, and Turkey have reportedly had their claims systematically rejected, resulting in a zero percent recognition rate for those nationalities. The recognition rate for Afghan asylum seekers was just 1.5 percent in 2017, compared to the 46 percent overall EU average.