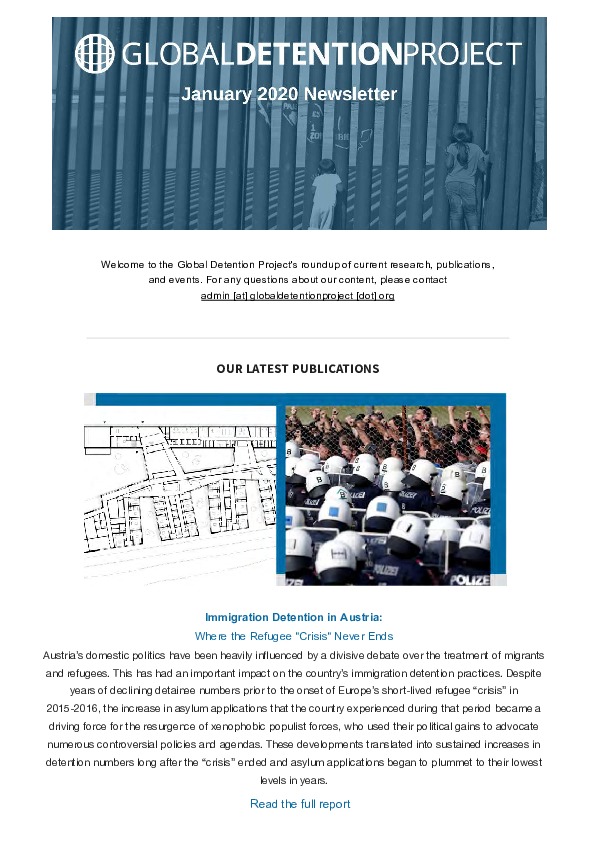 Immigration Detention in Austria: Where the Refugee “Crisis” Never Ends

Austria’s domestic politics have been heavily influenced by a divisive debate over the treatment of migrants and refugees. This has had an important impact on the country’s immigration detention practices. Despite years of declining detainee numbers prior to the onset of Europe’s short-lived refugee “crisis” in 2015-2016, the increase in asylum applications that the country experienced during that period became a driving force for the resurgence of xenophobic populist forces, who used their political gains to advocate numerous controversial policies and agendas. These developments translated into sustained increases in detention numbers long after the “crisis” ended and asylum applications began to plummet to their lowest levels in years. Read the full report.

The Debate over Promoting Alternatives to Detention for Children

The effort to promote “alternatives to immigration detention” in the context of children in administrative removal proceedings faces a number of important challenges, in part because encouraging states to consider “alternatives” for children may in fact reinforce the logic of detaining them. This article by the GDP’s Michael Flynn is contained in the recently released volume Migration, State Obligations, and Rights in a Globalized Context (Global Studies Institute 2019). Read the essay here.

Immigration Detention under the Global Compacts in the Light of Refugee and Human Rights Law Standards.

In an article for International Migration, GDP Researcher Izabella Majcher explores how immigration detention is addressed in the Global Compact on Refugees (GCR) and Global Compact for Safe, Orderly and Regular Migration (GCM), and investigates the potential implications of the compacts on existing legal framework regulating the use of immigration detention. Read more.

In December, GDP Research Fellow Jun Pang was an invited speaker at the conference “Non- Sovereign Revolutions?Thinking Across Puerto Rico and Hong Kong,” hosted by the CUNY Graduate Centre in New York. Pang discussed the Hong Kong protest movement in light of the history of colonial authority on the territory and its implications on what she terms the “ossified categories of nation-state sovereignty.” More information about the event is available here and here.

In an article for UCL Journal of Law and Jurisprudence, GDP Fellow Mario Guido argues that in designing a system of private prison labour, compliance with the requirements of the Forced Labour Convention is a necessary first step to avoid the exploitation of prisoners and to protect human rights. In analysing France, Germany, and Australia, Guido identifies the French system as the most compatible with the Convention and proposes a model framework that complies with the norm and serves the objectives of modern penal systems. Read more.