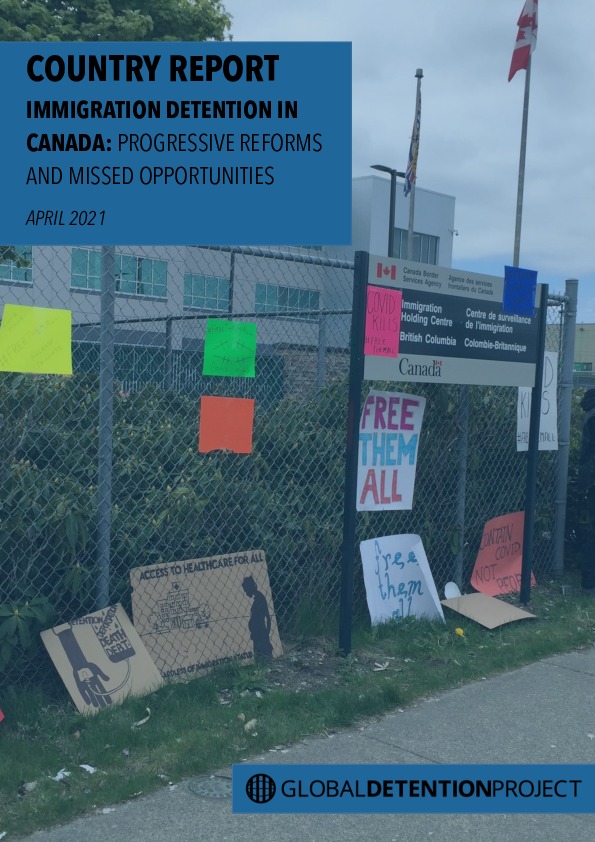 In recent years, Canada has adopted both progressive refugee policies and restrictive border control measures, including agreeing to accept more refugees than other countries while at the same time adopting policies that restrict asylum eligibility. Canada’s immigration detention system has also continued to attract criticism, particularly because of its persistent use of prisons for immigration purposes, the carceral environments of its dedicated immigration detention centres, and its failure to adopt a maximum time limit for immigration detention, leaving some detainees facing indefinite detention. The country also continues to have important gaps in transparency and detention monitoring, having failed to adopt the Optional Protocol to the UN Torture Convention—leaving the country without a National Preventive Mechanism as required by the protocol—and there is no publicly available system in place to investigate which prisons are being used for immigration detention.

In recent years, Canada has adopted both progressive refugee policies and restrictive border control measures. Following his election in 2015, Prime Minister Justin Trudeau launched an ambitious refugee resettlement programme, vowing to accept 25,000 Syrian refugees by the end of the year (a figure that was met in March 2016). In 2018, the country accepted the largest number of resettled refugees (28,100) worldwide. More recently, in October 2020, Canada’s federal immigration minister announced plans to bring in more than 1.2 million immigrants within three years to fill the country’s labour market and boost its economy, both of which were hard hit by the COVID-19 pandemic.

At the same time however, authorities have sought to fortify Canada’s borders and restrict access to protection procedures for certain groups. In April 2019, the government proposed changes to its refugee determination system in its Budget Implementation Bill (Bill C-97). The bill proposed the introduction of a new ground of ineligibility for refugee protection, blocking applicants who initially seek asylum in another country.[4] The amendment was eventually approved in July 2019, but not before it received heavy criticism. The Canadian Refugee Council (CRC) said in a submission to the Standing Commission on Citizenship and Immigration that “the proposed changes would place many people at increased risk of being sent back to face persecution, in violation of the Canadian Charter of Rights and Freedoms and of Canada’s international human rights obligations.”

As of April 2021, people in immigration procedures could be detained in three dedicated immigration holding centres (IHCs)—the Laval IHC, the Toronto IHC, and the Surrey IHC (with a combined capacity of 362)—in addition to provincial prisons and police stations across the country. However, the number of detainees significantly decreased during 2020, as a result of the COVID-19 pandemic. Acknowledging the risks that the virus posed to confined populations—as well as the impossibility of deportations while borders remained closed—the Canada Border Services Agency (CBSA) released more than half of its detainee population, with many released into “alternatives to detention” (ATDs). The number of people in immigration detention fell from 353 non-nationals on 17 March to 147 by 19 April 2020. By November, only 138 people remained in detention.

After the onset of the COVID-19 pandemic, the government further limited asylum seekers’ access to protection. In March 2020, authorities banned foreign nationals from entering the country from the United States to lodge an asylum request. Observers said that this violated international law.

The Safe Third Country Agreement between Canada and the United States provides that people seeking asylum must make their protection claim in the first country where they arrive, which results in some asylum seekers being deported back to the United States. A July 2020 Federal Court ruling found that the agreement violated the Canadian Charter of Fundamental Rights and Freedoms because the United States could no longer be considered a safe country for refugees in light of the risk of detention and deportation they face there. Although the court gave the Canadian government six months to amend its legislation, the government requested a stay of the decision. On 15 April 2021, the Federal Court’s 2020 decision was overturned by a Federal Court of Appeal, prompting rebuke from migrant-rights organisations. At the time of this publication, advocates were considering a challenge to this latest ruling at the Canadian Supreme Court.

In 2014, the death of a Mexican detainee—Lucía Dominga Vega Jiménez—by suicide in the IHC at Vancouver Airport heightened concerns about Canada’s detention system. In the inquiry into Jiménez ‘s death, the coroner identified numerous problems at the Vancouver IHC, including a lack of suicide prevention and mental health training for private security personnel staffing the facility; detainees’ difficulties in accessing legal counsel, both in person and by phone; and inadequate conditions within the centre.

In 2016, the Minister of Public Safety and Emergency Preparedness announced Canada’s intention to “transform” its immigration detention system to “better align itself with international and domestic standards.” The announcement came after a series of high profile incidents and reports about immigration detention in the country, including several hunger strikes by detainees, deaths in detention, a change in political parties at the federal level, a scathing official audit, in addition to evolving jurisprudence. CBSA subsequently implemented a new National Immigration Detention Framework (NIDF) in 2017, intended to “create a better, fairer immigration detention system that supports the humane and dignified treatment of individuals while protecting public safety.”

The reforms have had some notable results: the number of detainees held for three months or longer has declined consistently over the last five years, and the average length of detention has decreased from 26.3 days in Fiscal Year (FY) 2014-2015 to 13.9 days in FY 2019-2020. The use of provincial prisons for immigration detention has also dropped: falling from 20 percent of all detentions in FY 2017-2018 to 16 percent in FY 2018-2019.

As part of the NIDF, the government pledged a 138 million CAD investment to improve immigration detention, primarily by expanding and renovating IHCs and implementing non-custodial “alternatives to detention.” In March 2020, CBSA opened a new IHC in the Vancouver suburb of Surrey, British Columbia, replacing the Vancouver airport facility.  Authorities stated that detainees would now have access to outdoor space, natural light, and proper ventilation, and be able to receive mental health services. The CBSA continues to contract guard services from private companies, despite recommendations to use CBSA staff.