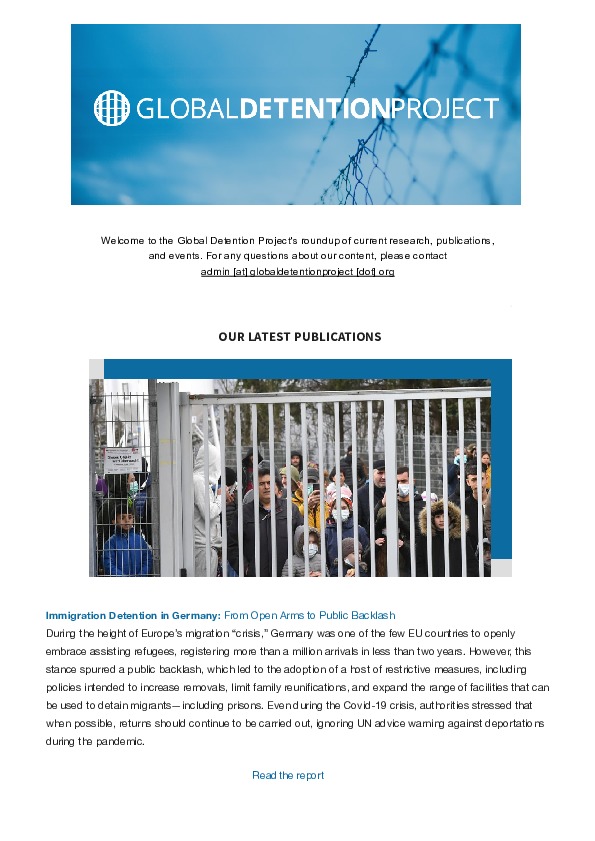 Immigration Detention in Germany: From Open Arms to Public Backlash

During the height of Europe’s migration “crisis,” Germany was one of the few EU countries to openly embrace assisting refugees, registering more than a million arrivals in less than two years. However, this stance spurred a public backlash, which led to the adoption of a host of restrictive measures, including policies intended to increase removals, limit family reunifications, and expand the range of facilities that can be used to detain migrants—including prisons. Even during the Covid-19 crisis, authorities stressed that when possible, returns should continue to be carried out, ignoring UN advice warning against deportations during the pandemic. Read the report.

Submissions to the UN Committee on the Rights of the Child: Tunisia and Cyprus

In submissions to the UN Committee on the Rights of the Child (85th session), the GDP has sought to draw the committee’s attention to issues concerning the detention of children in Tunisia and Cyprus. In a joint submission with the Forum Tunisien pour les Droits Économiques et Sociaux (FTDES), we highlighted concerns regarding the confinement of children in Tunisia’s Al-Wardia Detention Centre, where children have reportedly been detained, as well as conflicting statements surrounding the establishment of new migration-related detention centres with specific Covid-19-related purposes. In Cyprus, we noted the fact that the country’s Aliens and Immigration Law does not expressly forbid the detention of children and urged the committee to request information from Cypriot authorities regarding plans to update this law to prohibit migration-related detention of children. (After the GDP submitted these reports, the CRC announced the postponement of its consideration of country reviews during the 85th session.) Read the submissions: Tunisia and Cyprus

The use of private military and security services in immigration and border management: UN Working Group on the Use of Mercenaries

In a newly released report, the Working Group examines how private-sector enforcement of migration law has led to widespread human rights abuses—particularly in situations where migrants are deprived of their liberty. Highlighting the power many private companies possess and their ability to push for repressive immigration laws and practices, the Working Group underscores the way in which private companies reinforce security over humanitarian approaches to immigration and border management. As part of the Working Group’s activities ahead of the publication of this report was a November 2019 panel discussion at the UN Forum on Business and Human Rights in Geneva—“The use of private military and security companies in migrant detention centres”—at which the GDP presented lessons learned from our research into detention privatisation. Read the Working Group’s full report.

Since the start of the pandemic, the GDP has been closely monitoring how authorities across the globe are responding to the pandemic in their treatment of detained refugees, migrants, and asylum seekers as part of our Covid-19 platform. While some countries have taken important steps to protect this vulnerable population—including by securing their release from detention facilities—others have adopted concerning measures restricting the movement of non-nationals, conducting raids against undocumented migrants, blaming the spread of the disease on foreigners, and arbitrarily detaining thousands under the premise of health protection.

Even as the “refugee crisis” began to recede from the borders of many European countries and as detections of unauthorised border crossings into the EU declined, authorities in many European states have been adopting increasingly restrictive border and detention policies. Authored by the GDP’s Izabella Majcher, Michael Flynn, and Mariette Grange, Immigration Detention in the European Union: In the Shadow of the “Crisis” offers a unique comparative assessment of the evolution of immigration detention systems in European Union member states since the onset of the “crisis.” For more information—or to buy a copy—click here.