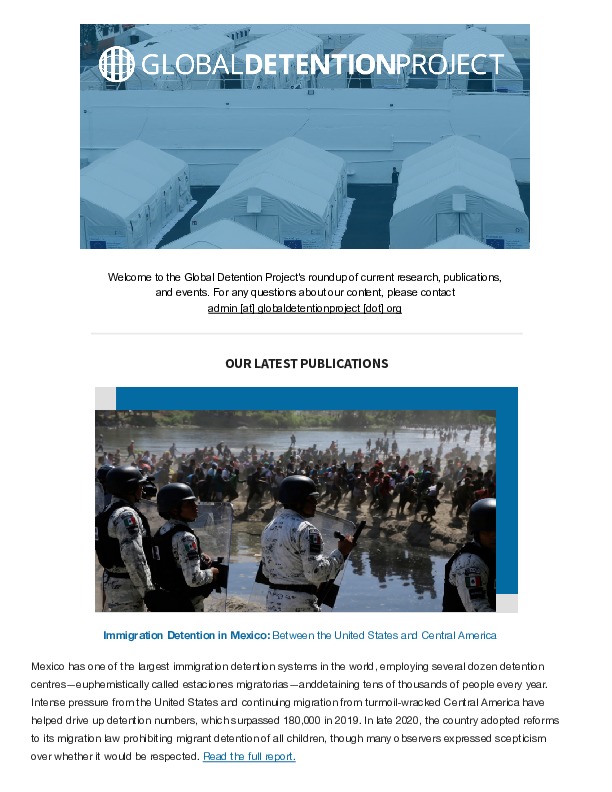 Immigration Detention in Mexico: Between the United States and Central America

Mexico has one of the largest immigration detention systems in the world, employing several dozen detention centres—euphemistically called estaciones migratorias—and detaining tens of thousands of people every year. Intense pressure from the United States and continuing migration from turmoil-wracked Central America have helped drive up detention numbers, which surpassed 180,000 in 2019. In late 2020, the country adopted reforms to its migration law prohibiting migrant detention of all children, though many observers expressed scepticism over whether it would be respected. Read the full report.

Implementing the Non-Punishment Principle for Victims of Trafficking

The GDP’s Michael Flynn served as a moderator for a two-day expert consultation convened by the UN Special Rapporteur on trafficking in persons on 4-5 February aimed at informing the SR’s June 2021 report to the Human Rights Council. Read more about the preparations for the report here.

Using Detention to Talk About the Elephant in the Room

In an article for the International Journal of Law in Context, GDP Advisor Mariette Grange and former GDP Researcher Izabella Majcher discuss the evolution of multilateral processes on migration since the 1980s, with a focus on immigration detention as a growing response to migratory movements. Read more.

Although New Zealand places comparatively few people in immigration detention, the country has faced criticism for imposing lengthy detention stays on asylum seekers and people in immigration enforcement procedures. Between 2015 and 2019, 86 detainees—held in prisons rather than dedicated immigration detention facilities—were confined for an average of 166 days, while 11 people spent more than 400 days in prison. During the pandemic, the country has received fresh criticism for its handling of immigration-related detention—particularly with regards to detainees’ prolonged detention stemming from COVID-19 travel restrictions. Read more about New Zealand’s detention policies here.