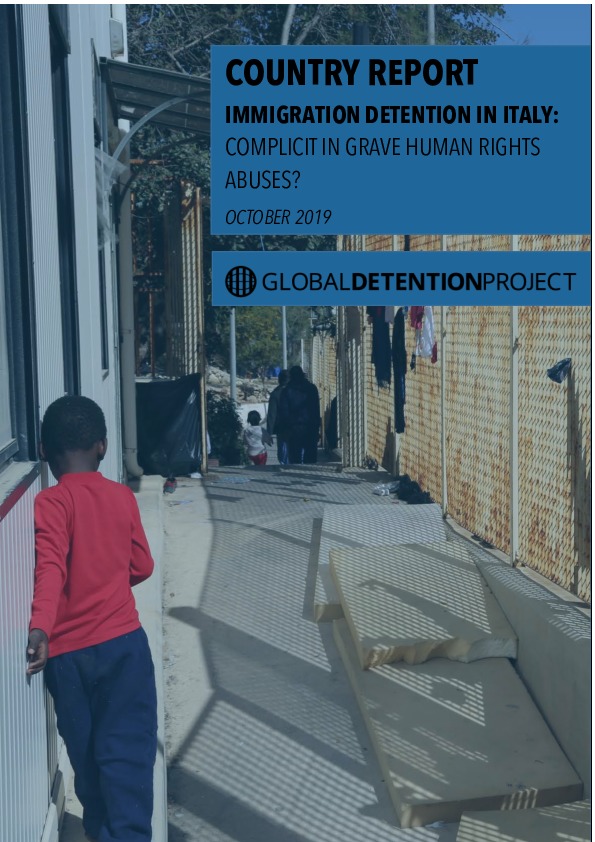 Immigration Detention in Italy (2019 Report): An important European destination for asylum seekers and migrants crossing the Mediterranean from Africa, Italy has been an aggressive proponent of draconian migration control practices, spurring accusations that the country has been complicit in grave human rights violations. During the tenure of notorious former Interior Minister Matteo Salvini, Italy resorted to extreme measures to prevent maritime arrivals, including blocking ports to vessels carrying refugees, prosecuting people seeking to save lives at sea, and supporting the interdiction efforts of various Libyan armed forces. In 2018 the country’s immigration legislation was amended, doubling the maximum length of detention in pre-removal centres and creating a new legal ground for the detention of asylum seekers for identification purposes. Meanwhile, non-citizens continue to be de facto detained in Italy’s controversial “hotspots,” through which more than 40,000 people passed in 2017. Read the Italy Immigration Detention Profile.

Italy was until recently the main European destination for asylum seekers and migrants attempting to cross the Mediterranean. In 2016, approximately 180,000 people reached Italian shores. Of these, 25,000 were unaccompanied children, doubling the number from previous years. By 2018, however, the number of arrivals had already begun to fall. Between 1 January and 30 April 2019, only 779 refugees and migrants arrived by sea.

Despite the declining migration pressures, Italy’s populist government, led by the firebrand right-wing Interior Minister Matteo Salvini, continued to pursue many draconian policies, including closing ports to NGO boats carrying migrants and stranding vessels at sea. In one case, in August 2018, the Ubaldo Diciotti—a coastguard ship with 177 people, including unaccompanied minors, on board—was left stranded at sea for six days, before eventually being permitted to dock. However, the migrants and refugees were prevented from disembarking for almost a week. After Italian prosecutors opened an investigation into alleged “illegal confinement, illegal arrest and abuse of power” the migrants were permitted to disembark, with Albania, Ireland, and Italy’s Catholic Church agreeing to accommodate them.

In May 2019, Salvini tabled the Decreto Sicurezza Bis, which included fines for NGO vessels of up to 5,500 EUR per rescued person as well as provisions granting the Interior Minister the power to restrict and prohibit transit within Italian territorial waters. Shortly after the publication of the first draft, UN human rights experts, including the Special Rapporteur for the human rights of migrants and the Special Rapporteur on torture, urged the country not to adopt the decree because it “would seriously undermine the human rights of migrants, including asylum seekers, as well as victims of torture, of trafficking in persons and of other serious human rights abuses.” The human rights experts also demanded the withdrawal of directives preventing humanitarian vessels from accessing Italian ports. Despite condemnation, the proposed decree was signed into law.

Although the coalition government that included Salvini collapsed in mid-2019, in great measure because of growing concern over its extreme anti-migration policies, many of the country’s controversial practices pre-date that government. At the heart of the county’s response to migration have been its immigration detention operations, which have grown and diversified in recent years. In 2017, nearly 45,000 people faced some form of migration-related detention, which placed Italy among the world’s largest detainers. This number included approximately 4,000 people detained in one of Italy’s long-term detention centres, euphemistically called Centro di Permanenza per il Rimpatrio, and some 40,000 who passed through “hotspots.”

In 2017, Italy adopted Law 46/2017 (the Minniti-Orlando Decree, D.L 12/2017), which established several new immigration and asylum control measures and allocated 13 million EUR for the establishment of new detention centres. Among the new measures, the law amended the Consolidated Immigration Act to provide expanded criteria for assessing the risk of absconding and eliminated the possibility of appealing a first instance court decision rejecting an asylum application, making appeal possible only through the Supreme Court. Asylum procedures were also simplified by removing the courts’ obligation to hear an asylum seeker. In 2018, the country’s immigration legislation was further amended with Decree Law 113/2018, known as Decreto Sicurezza, adopted as Law 132/2018. The amendment increased the maximum length of detention in CPRs from 90 to 180 days; created a legal ground for detaining asylum seekers for identification purposes; and introduced new grounds for the revocation or denial of international protection.

Immigration detention in Italy has long operated in a grey area, leading to intense national and international scrutiny. For instance, in its December 2016 ruling in Khlaifia vs. Italy, the European Court of Human Rights found that Italy had violated Article 5 of the European Convention on Human Rights, which protects the right to liberty and security, in relation to its detention of four Tunisian migrants at a “first aid and reception centre” in Lampedusa (the centre was later converted into a “hotspot”).

The Khlaifia case underscored the impact of Italy’s misleading use of terms like “reception” to denote detention, which has been a persistent aspect of Italian law and policy. A case in point was the review of Italy before the UN Committee against Torture (CAT) in November 2017. During the session, an Italian official responded to a question concerning immigration detention by arguing that such detention did not exist in the country. He said, “Now, detention or people being held in centres for repatriation, this is once again not a form of detention, this is administrative holding of a person, it is temporary and has to do with preparing a case for repatriation. This only affects dangerous individuals, all of these stages of the process are provided for in our law.” An expert in Italy commented: “In Italian legislation, administrative detention is defined as ‘administrative holding’ (trattenimento amministrativo). The word detention is not used. However, people are held in a place and they cannot go out. Ironically, the fact that it is not defined as detention makes the condition and the accessibility to rights worse than in prison.” Regarding the Italian official’s assertion that this “administrative holding” only applies to “dangerous” people, the expert said: “There is no assessment of the dangerousness of the people held in the administrative detention centers. They are there due to their immigration status and not because they are necessarily dangerous individuals.”

Since early 2016, concerns over arbitrary detention in Italy have intensified following Italy’s implementation of the controversial “hotspot” approach to address migration and refugee pressures, an EU-promoted registration and identification procedure that involves holding people at key points of arrival. As several NGOs concluded in a 2019 report, Crossing a Red Line, persons are de facto detained in Italy’s hotspots—or, in other words, “deprived of their liberty in the absence of a detention order.”

Italy has also been instrumental in supporting overseas interdiction and migration control efforts, including European Union (EU) programmes equipping and training the Libyan coastguard to intercept trafficking boats. The country has intervened inside Libya, supporting International Organisation for Migration (IOM) “voluntarily return” programs and relocating some vulnerable individuals to Italy. In 2017, the Italian government signed a Memorandum of Understanding with Libya’s Government of National Accord (GNA) allowing the Libyan coastguard to intercept boats bound for Italy and return all those on-board to disembarkation zones in Libya, where they would subsequently be placed in detention. At the same time, Italy was paying rival militias to stop migrant boats in parts of the country not fully under government control, which have reportedly helped fuel armed conflict in these areas. Italy’s Interior Minister argued that all migrants rescued by European vessels should be sent back to Libya.