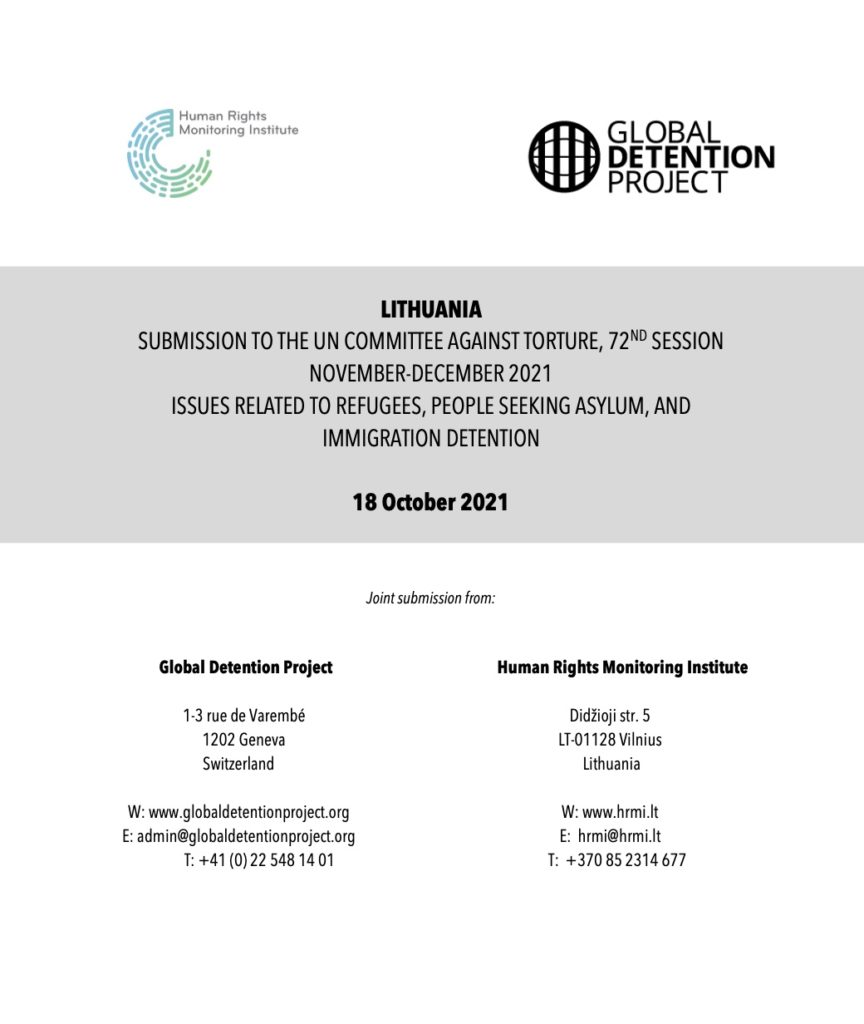 SUBMISSION TO THE COMMITTEE AGAINST TORTURE

1.2 The submission focuses on human rights concerns relating to Lithuania’s treatment of migrants, refugees, and people seeking asylum, including its use of immigration detention.

1.3 Previously (in 2014), the Committee addressed numerous concerns regarding the mistreatment of people in migration-related detention in the country and issued relevant recommendations, some which appear not to have been fully addressed.

1.4 This submission aims to focus particular attention on growing concerns about Lithuania’s treatment of migrants and asylum seekers in response to recent increases in border crossings from Belarus. Lithuania’s response has included stranding vulnerable migrants and asylum seekers, including children, in dire conditions at border regions and approving legislation that significantly extends detention time periods for asylum seekers and limits access to legal procedures. Recent testimonies provided by detained migrants and asylum seekers include numerous allegations of torture and mistreatment by security officials (see below for details about the allegations). Additionally, the European Union Home Affairs Commissioner has expressed concern “about reports of people including children stuck in forests in dire situation at external EU borders with Belarus”[1] while the UN High Commissioner for Refugees has sharply criticized the new legislation, affirming that the “detention of asylum seekers should not be used by default or mandatorily for all arrivals, but rather remain the exception.”[2]

1.5 The recent moves to further restrict asylum procedures and expand detention powers appear to aggravate earlier concerns sparked by Lithuania’s response to the COVID-19 pandemic, in particular its lengthy border closures and its implementation of quarantine measures for asylum seekers.[3]

1.6 Lithuania previously operated one dedicated immigration detention centre, the Pabrade Detention Centre (also known as the Foreigners Registration Centre), which is located north-east of Vilnius. The facility has attracted widespread criticism for many years due to its poor conditions, repeated allegations of disproportionate use of force, and over-crowding. The centre is reprotedly undergoing renovations, which are due to be completed by 2022.[4]The renovation reportedly will cost approximately 6.4 million EUR, 90 percent of which is to be provided by the EU.[5]

1.7 In addition to the Pabrade centre, non-citizens who apply for asylum at the border and are subject to accelerated asylum procedures may be held at border crossing points and in transit zones for up to 28 days. According to UNHCR, the border procedure may fall short of international standards because it does not have sufficient safeguards against unlawful or arbitrary detention. According to the ombudsman, the State Border Guard Service oversees 70 facilities where non-citizens may be detained in the course of border procedures.[6]

1.8 The COVID-19 pandemic and the recent pressures stemming from cross-border movements from Belarus appear to have spurred a substantive increase in Lithuania’s migration-related detention operations and infrastructure. These include new de facto and ad hoc detention sites, the deprivation of liberty of asylum seekers in forced quarantine as a purported COVID-19 mitigation measure, and the use of closed accommodation in abandoned schools and other derelict facilities since the onset of the tensions along the border with Belarus. It is important to mention in this regard the recent remarks made by the chair of the Subcommittee for the Prevention of Torture affirming that “places of quarantine are places of ‘detention’ for the purposes of the [Optional Protocol to the UN Convention against Torture].”[7]

1.9 The submission is provided in light of numerous recent authoritative opinions issued by UN human rights bodies concerning the human rights violations that are inherent in many migration-related detention practices. These include the 2017 General Comment by the Committee on the Rights of the Child (issued jointly with the Committee on Migrant Workers) affirming that the migration-related detention of children is inherently a violation of children’s’ human rights and thus must be abolished[8]; and the Special Rapporteur on Torture’s 2018 report, which found that “systematic and open-ended detention of people simply because they are migrants has nothing to do with legitimate border protection but amounts to arbitrary deprivation of liberty” and that “Such detention can even amount to torture, especially when it is intentionally used to deter, intimidate, or punish migrants or their families.”[9]

[6] A. Brunovskis and S. Sønsterudbråten, “Asylum, Integration and Irregular Migration in Lithuania: Policy and Practice at the Edge of the European Union,” FAFO Report, https://www.fafo.no/images/pub/2017/20631.pdf;UN High Commissioner for Refugees, Beyond Detention: Progress Report 2018, 2019, https://www.unhcr.org/protection/detention/5c934bbd7/unhcr-global-strategy-beyond-detention-progress-report-2018.html

[7] Office of the High Commissioner for Human Rights, “Statement by Sir Malcom Evans – Chairperson, Subcommittee on Prevention of Torture and Other Cruel, Inhuman or Degrading Treatment or Punishment,” 15 October 2020.

[9] Human Rights Council, “Report of the Special Rapporteur on Torture and Other Cruel, Inhuman or Degrading Treatment or Punishment,” A/HRC/37/50, 26 February 2018, https://www.ohchr.org/Documents/Issues/Torture/A_HRC_37_50_EN.pdf