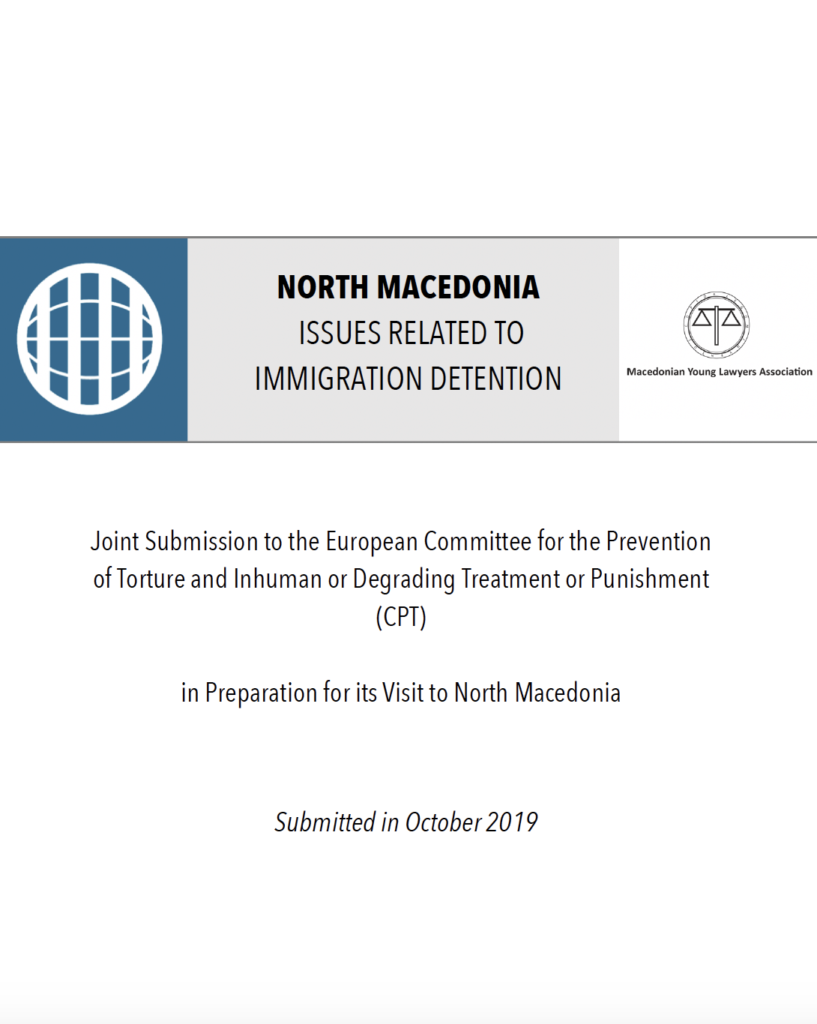 in Preparation for its Visit to North Macedonia

The Macedonian Young Lawyers Association (MYLA) is an independent, non-profit, professional organisation that provides legal aid and strategically litigates to protect human rights. Immigration detention is one of the focuses of its work through detention monitoring, providing information to detained migrants and asylum seekers, and undertaking advocacy activities aimed at ending arbitrary detention and child detention.

The GDP and MYLA are pleased to provide the European Committee for the Prevention of Torture and Inhuman or Degrading Treatment or Punishment (CPT) the following submission in preparation for its visit to North Macedonia in 2019. The submission concerns detention of migrants and refugees. As such, it is informed by the CPT’s relevant standards as included in “Foreign Nationals Detained Under Aliens Legislation” (7th General Report of the CPT, CPT/Inf (97)10, 1997) and “Safeguards for Irregular Migrants Deprived of their Liberty” (19th General Report of the CPT, CPT/Inf (2009)27, 2009).

During the CPT’s previous visit to North Macedonia in October 2014, the delegation visited the immigration detention centre in Skopje (formally called the Reception Centre for Foreigners) and found several shortcomings, notably in relation to prevention of ill-treatment at the hands of staff and inter-detainee violence, overcrowding, and conditions of detention (poor state of repair and hygiene, lack of separate accommodation for families and separation of children, insufficient outdoor exercise, inadequate food provision, lack of recreation activities). Further, unaccompanied children were not offered specialised care, there were no medical staff in the centre on a daily basis, and contact with the outside world (both through telephone and visits) was often impeded.[1]

In the GDP and MYLA’s view, given the multitude and gravity of concerns about the Skopje detention centre, it is critical that the centre be visited again to assess whether the committee’s recommendations have been implemented.

These concerns have become even more paramount since the CPT’s 2014 visit because of the onset of the migration and “refugee crisis” in 2015. That year, roughly one million people transited the country. Official statistics provided by the Ministry of Interior indicate that 1,346 people were detained at the country’s sole official detention centre in 2015.[2]

After the creation of a “humanitarian corridor” in August 2015, the numbers of detainees at the Skopje facility began to drop.[3] However, closure of the corridor in early 2016, which left some 1,200 migrants and asylum seekers stranded in North Macedonia, coincided with increased push-backs at its southern border.[4] In mid-2018, the government extended a state of emergency, introduced in 2015, which provides for military police patrols along the border.[5] While the numbers of detainees in Skopje appears to have levelled off,[6] credible reports indicate that border guards hold refugees at ad hoc “transit” camps, from which people are reportedly pushed “back” to Greece.[7]

This submission is based on the GDP’s report on North Macedonia[8], MYLA’s annual reports on immigration detention,[9] and other reports.[10] Key findings and concerns that have emerged from of this research include:

TRANSPARENCY AND DETENTION DATA: There is little available or comprehensive data on the numbers of immigration detainees in North Macedonia. Available information suggests that the number of detainees at the Skopje facility doubled between 2017 and 2018. However, important gaps remain.

PLACES OF DETENTION OR RECEPTION: Although North Macedonia appears to have only one dedicated immigration detention centre, in Skopje, reports indicate that other facilities are used by security officials to confine migrants and asylum seekers. In early 2016, the country began placing migrants at an ad hoc “transit centre” in the south of the country; in addition, it started housing people at a transit centre in the north, in Tabanovce. The use of these facilities for these purposes does not appear to be provided for in law. These centres were originally built to assist the transit of refugees during the border tensions in 2014-2016.[11]

After the official re-closure of the borders with Serbia and Greece, some 1,500 people were stranded in the northern camp of Tabanovce and an additional 200 in the southern facility at Gevgelija.[12]  Tabanovce operated largely as an open, non-secure facility, where people were strongly encouraged not to leave the camp but have been seen leaving and entering at will. Even though the centre never had its gates closed during daytime, people were afraid to leave for fear of not being allowed back in. At the “Vinojug” Transit Centre in Gevgelija, people were not allowed to leave, which appeared to be an arbitrary decision by the camp management. Some people have been held in the facility for nearly a year without any status, no pending asylum cases, and no means to challenge detention.[13]  Reportedly, as of early 2019, most of the people placed in Vinojug centre stayed there for a short period of time and were arbitrarily pushed-back to Greece.

COUNTRIES OF ORIGIN AND ACCESS TO ASYLUM: In 2018, most detainees came from Pakistan, Afghanistan, Iraq, and Iran. Detainees frequently face obstacles in accessing the asylum procedure in detention.

NEW GROUNDS FOR DETENTION: in April 2018, the Law on International and Temporary Protection (LITP) was adopted to replace the Law on Asylum and Temporary Protection. Reportedly to adjust to EU legislation, the new law introduced for the first time provisions on detention of asylum seekers. The maximum duration of detention is three months, which can be extended by an additional three months. However, the law appears to misleadingly refer to this measure as “limitation on freedom of movement,” which would indicate that people are not deprived of their liberty when this measure is applied. Reports indicate, however, that in fact people are detained.

LEGAL SAFEGUARDS: Detainees reportedly often do not receive detention decisions in a timely manner or adequate information about the reasons for detention and their rights in a language they understand. Consequently, few detainees are able to challenge their detention. The only legal assistance offered to detainees appeared to be assistance on asylum provided by the MYLA. However, since early 2019, the Ministry of Interior has stopped responding to MYLA’s weekly requests for visits. Currently, there is no available data on the availability of legal assistance or counselling in the detention centre.

MONITORING OF DETENTION: MYLA was systematically visiting people in detention with limited access to detention areas until 2019. The access was reportedly denied to other organisations, including Human Rights Watch and Macedonian Helsinki Committee, and since 2019 to MYLA as well.

[4] European Center for Constitutional and Human Rights, “Case Report, Push-Backs at the Greek-Macedonian Border Violating Human Rights,” September 2016; Macedonian Young Lawyers Association (MYLA), “Annual Report on Immigration Detention in Macedonia,” 2016, http://myla.org.mk/wp-content/uploads/2016/09/MYLA-2016-Report-on-Immigration-Detention-in-Macedonia.pdf – “However, not all of the persons from the groups were detained in the Reception Centre for Foreigners. Specifically, out of 39 groups, 553 persons were returned to Greece, and only 100 (15,31%) were detained.”

[5] B. Weber, “The EU-Turkey Refugee Deal and the Not Quite Closed Balkan Route,” Friedrich Ebert Stiftung, June 2017, http://library.fes.de/pdf-files/bueros/sarajevo/13436.pdf

[10] Helsinki Committee for Human Rights of the Republic of Macedonia, “Monthly Report on the Human Rights of migrants, Refugees and Asylum Seekers in Serbia and Macedonia- September 2018,” https://mhc.org.mk/en/reports-en/monthly-report-on-the-human-rights-of-migrants-refugees-and-asylum-seekers-in-serbia-and-macedonia-september-2018/

[11] Macedonian Young Lawyers Association (MYLA), “Closed Borders. Programme Report on the impact of the borders closures on people on the move, with a focus on Women and Children in Serbia and Macedonia,” 2016, http://myla.org.mk/wp-content/uploads/2016/09/Closed_Borders_ENG_low.pdf

[12] The monitoring reports on the human rights situation of refugees in said camps on the homepage of the Helsinki Committee for Human Rights, http://www.mhc.org.mk/reports