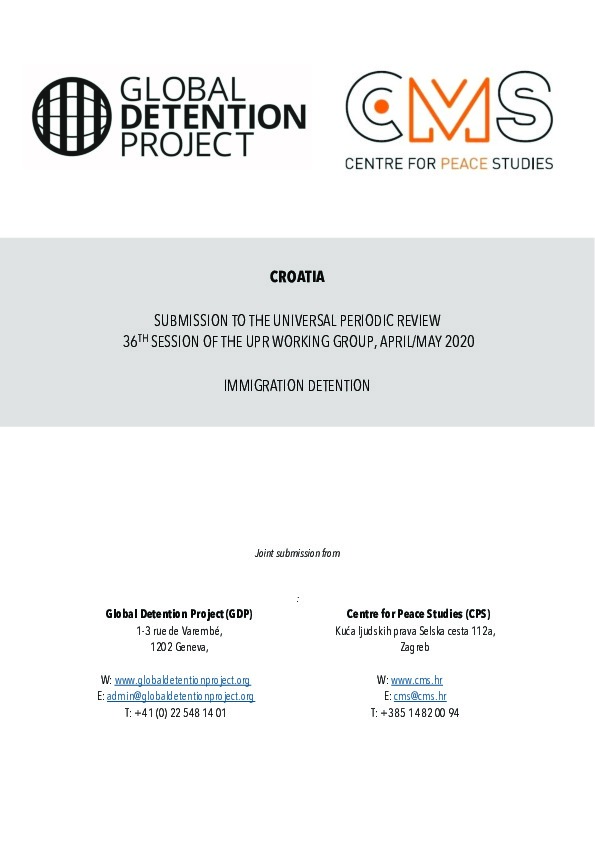 This submission focuses on human rights concerns relating to Croatia’s policies on detention of refugees, asylum seekers, and migrants.

During the 2nd cycle of the Universal Periodic Review of Croatia (22nd session, May 2015), the immigration detention policies and practices of Croatia do not appear to have been raised. However, as the GDP has documented in its reports on Croatia,[1] as early as the mid-2000s, international and regional human rights observers have documented serious concerns about the country’s immigration detention practices, including:

During the 2nd cycle of the Universal Periodic Review, the country accepted two recommendations that can have relevance to the treatment of people in immigration detention:

Croatia has long served as a transit country for refugees and migrants attempting to reach Western Europe. According to CPS, although the country has failed to develop adequate integration policies, it has nevertheless made border control a key focus of immigration policy. Starting in late 2015, after Hungary completed construction of a barbed wire fence on its border with Serbia, hundreds of thousands of refugees—mainly from Syria, Afghanistan, and Iraq—began crossing into Croatia. By March 2016, the country experienced more than 600,000 arrivals.[4] The government responded with a mix of new security policies and ramped up humanitarian assistance, including escorting refugees from the Serbian border to transit reception camps as part of their onward journeys.[5]

In early 2016, Croatia joined Slovenia in imposing strict daily limits on the number of refugees allowed to enter. Croatia also adopted new legislation[6] granting power to the armed forces to support the country’s police in protecting borders.[7] Public discourse in the country often reflects an ambiguous line between militarisation of borders and solidarity with refugees. For example, in July 2018 Croatia’s Interior Ministry asserted, “Croatia will continue to protect its borders. We will not allow illegal migrations, while at the same time we show humanity and solidarity with those who really need help.”[8] According to many reports (some of which include medical documentation), Croatia systematically carries out pushbacks into Serbia and Bosnia and Herzegovina—in which force is frequently applied.[9]

According to CPS, there is a clear tendency for the state authorities to limit the access of lawyers, Ombudsperson, and civil society organisations to persons who require their assistance in detention centres. This lack of access to detention facilities limits the scope of rights protection for victims of violence.

Furthermore, there are serious concerns that state authorities do not employ the detention of vulnerable groups, including families with children, as a measure of last resort. These concerns were supported by the European Court of Human Rights, which in the case of one family issued an interim measure due to overly long and unjustified detention.[10] Other reports confirm that “in the course of 2018, a total of 110 children were placed in detention; this number is not confined to asylum-seeking children. Of those, 32 were detained in Ježevo, 41 in Tovarnik and 37 in Trilj. Unaccompanied children were not detained in the course of 2018.’’[11]

The GDP’s 2019 report on Croatia (appended to this submission) [12] and CPS’s reports[13] identify several on-going concerns regarding the country’s immigration detention practices and policies:

Centre for Peace Studies (2017): Alternatives to Detention – Overview of EU Practice with Recommendations for Model Development in the Republic of Croatia

[1] See the website of the Global Detention Project, “Croatia,” https://www.globaldetentionproject.org/countries/europe/croatia

[2] Reports from the 2003, 2007, and 2017 CPT visit to Croatia are available on the website of the European Committee for the Prevention of Torture, “Croatia,” https://www.coe.int/en/web/cpt/Croatia

[4] European Network of Ombudsmen, “Network in Focus in 2016 – Responding to Europs’ migration crisis. Promoting lobbying transparency as good administration. Challenges to the rule of law in the EU”, 2016,  https://www.ombudsman.europa.eu/en/publication/en/72806

[7] Ombudsman of Croatia, “Report on the Performance of Activities of the National Preventive Mechanism for 2016,” 2017, http://ombudsman.hr/en/reports/send/66-ombudsman-s-reports/999-report-on-the-performance-of-activities-of-the-national-preventice-mechanism-for-2016