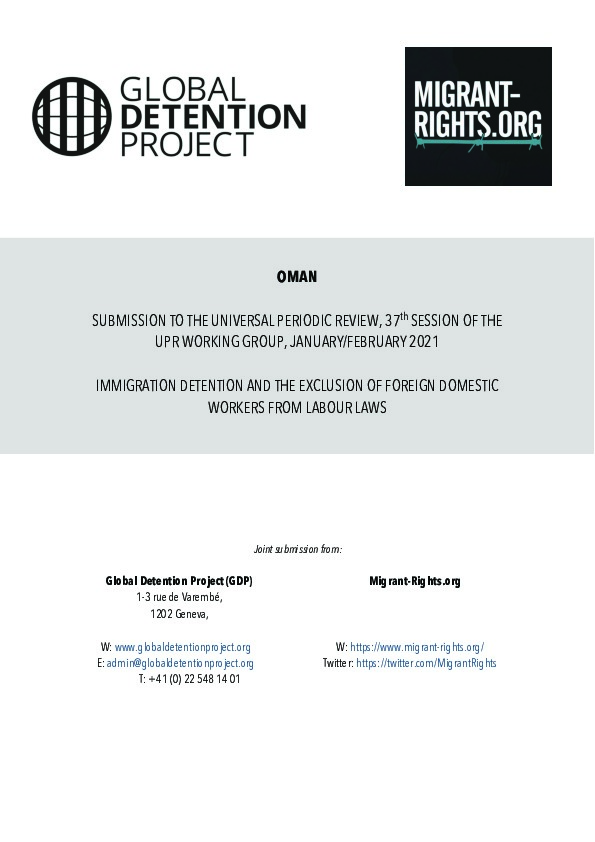 Oman: Immigration Detention and the Exclusion of Foreign Domestic Workers from Labour Laws

Migrant-Rights.org is a Gulf Cooperation Council (GCC) based advocacy platform working to advance the rights of migrant workers. It aims to change perspectives towards migrant workers by improving access to information on migration in the Gulf region and its migration corridors and promoting informed, local discussion on migration issues. Both off and online, Migrant-Rights.org engages residents, local businesses, and employers to challenge perspectives towards migrants and improve working conditions for some of the region’s most vulnerable workers.

This submission focuses on human rights concerns relating to Oman’s policies on detention of migrants, refugees, and asylum seekers, as well as the situation of foreign domestic workers who are excluded from labour laws.

1.1.1 Oman has long been an important destination for migrant workers, and the country has long been highly dependent upon large numbers of poorly paid workers—the vast majority of whom come from south and south-east Asia and east Africa. Today, migrant workers make up an estimated 45 percent of Oman’s 4.5 million population and 70 percent of the country’s workforce.[i]

1.1.2 However, despite its reliance on foreign labour, Oman features particularly restrictive immigration and sponsorship policies that make many non-nationals vulnerable to arrest, detention, and deportation. Since 1988, authorities have undertaken a vigorous nationalisation project to decrease the proportion of foreign workers in the country’s labour force. This “Omanisation” policy, similar to the “Saudisation” scheme of its larger neighbour, has led to the adoption of various quotas for specific industries in terms of their percentage of Omani to foreign workers. More recently, during the Covid-19 crisis, a directive issued by the country’s Supreme Committee provided that private sector companies struggling as a result of the crisis can ask non-Omani employees to permanently leave—so long as they commit to paying the workers’ dues before their departure.[ii]

1.1.3  Simultaneously, migrants have faced aggressive detention and deportation efforts. This was particularly the case in 2014 and 2015, when hundreds were deported each week.[iii] Since then, migrant workers in Oman have remained vulnerable to detention and deportation. In 2018, reportedly 4,500 “expats” were deported for violating labour laws and some 5,500 were arrested.[iv] More recently, according to the Ministry of Manpower, between 9 and 15 February 2020 some 246 migrant workers were reported to have been deported—followed by an additional 155 between 16 and 22 February—having been arrested during inspection campaigns.[v]

1.1.4 Migrants in Oman are particularly vulnerable to detention due to the continuation of the de facto kafala system. Under this sponsorship system, non-nationals have been required to procure a “No Objection Certificate” (NOC) from their employer in order to move jobs. This has left many workers acutely vulnerable to exploitation and abuse at the hands of their employers, and those who have attempted to leave without permission have been charged of “absconding” and faced arrest, detention, and deportation.[vi] On 31 May 2020, however, Oman amended Article 24 of the Law on the Residency of Foreigners, removing the NOC requirement for some workers—helping to reduce vulnerability to forced labour and labour trafficking. According to this new amendment, migrant workers who have finished their contracts may switch jobs from January 2021 without procuring such paperwork.[vii]

1.1.5 Migrant domestic workers, meanwhile, remain excluded from the protections of the country’s labour laws and to date the country has failed to adopt a domestic labour law even as other countries in the region have done so. Significant numbers of female migrant workers in Oman—many of whom originate from countries such as India, Pakistan, Nepal, Bangladesh, and Sri Lanka—are employed as domestic workers. However, as rights groups have regularly reported, such workers are often coerced to work long hours for minimal or no pay under threat of deportation, experience harassment and psychological and sexual abuse at the hands of their employers, are deprived of food, and face movement restrictions and confinement.[viii] The excessive control that employers thus possess over migrant domestic workers leaves some employees facing situations of arbitrary de facto deprivation of liberty.

1.1.6 Importantly, de facto deprivation of liberty at the hands of private individuals was recognised and noted by the Working Group on Arbitrary Detention in its preliminary findings following a 2019 visit to neighbouring Qatar—a state where migrant domestic workers are similarly excluded from labour laws and where many are prevented from leaving their employers.[ix] As the Working Group stated, authorities must ensure that “the right to personal liberty of all individuals in Qatar is respected in both the public and private sectors.”[x]

1.1.7 Although Oman has made efforts to combat trafficking—in 2019, officials convicted Omani nationals for trafficking crimes and sentenced them to prison time for the first time[xi]—significant issues still remain. In particular, with no screening in place, victims of trafficking and victims of exploitation and prostitution continue to be arrested, detained, and deported for acts committed as a result of being trafficked or due to their fleeing their employers.[xii]

1.2.1 The key provisions regulating administrative immigration-related detention in Oman are provided in the Law on the Residency of Foreigners (Law No. 16 of 1995).[xiii] Chapter Eight of the Residency Law (Articles 28-35) sets out the terms for deportation, which is linked to detention. Article 29 provides that any foreigner who has entered the Sultanate in an unauthorised manner may be expelled through an order of the General Prosecutor, and that the costs for the removal are to be covered by the deportee or their employer. Article 31 allows for the General Prosecutor to revoke the residency permit of any foreigner and order their deportation (along with that of their dependents) in three circumstances: 1) if they undertake any activity that harms the security of the Sultanate or if they violate general order and morals; 2) if they undertake any activity that harms the well-being of the Sultanate in its external relations with other countries; and 3) if they are not earning a living legally. Finally, Article 32 provides for detention if a person does not depart by a specific deadline and the measure is deemed necessary to carry out a deportation order.[xiv]

1.2.2 According to Article 32, detention for deportation can last up to two weeks. However, in reality the actual length of detention depends on the circumstances of each case and can last for much longer. Some domestic workers, for example, who do not have a consulate in Oman to assist them, are particularly vulnerable to lengthy periods in detention.

1.2.3 Prior to the Covid-19 crisis and its related movement restrictions, Omani media reported almost daily on “visa violators” being rounded up for detention and deportation. However, since the onset of the pandemic little information has been made publicly available detailing the treatment of apprehended migrants. It remains important to note, however, that migrant workers are often pushed into an irregular status due to no fault of their own, owing to the restrictions in place on changing jobs and the difficulties in addressing labour complaints, as well as the fact that many migrants continue to be trafficked  to the country for fake jobs.

1.2.4 Information regarding the sites in which such persons are detained remains sparse. The wikileaks cables from the U.S. Embassy in Oman reported the existence of two dedicated facilities as of 2006, in the cities of Salalah and Sohar. According to these cables, U.S. officials had visited the Sohar facility and reported that an estimated 400 “Pakistanis and other nationals” were deported from the facility every month.[xv] The existence of these two facilities was more recently confirmed by the U.S. State Department in its 2018 human rights report. The report states, “Authorities generally detained in centers in Salalah or the northern port city of Sohar, where they were held an average of one month before deportation to their countries of origin.”[xvi]

1.2.5 Several sources have also confirmed that non-nationals can be held in the Central Prison in Sumail, alongside ordinary prisoners.

1.2.6 Although the U.S. cables reported that the Sohar facility “appears to meet high standards” in 2006, more recently conditions in detention facilities have been reported to be poor. As a coalition of NGOs wrote in 2020, conditions are, “cramped, dismal, and unhygienic.” [xvii] Such reports raise particular concerns amidst the current Covid-19 pandemic, when the conditions in which detainees are held—and the subsequent potential for the virus to spread amongst confined populations—are of tantamount importance.[xviii]

2.1  During the 2nd cycle of the Universal Periodic Review of Oman (23rd session, November 2015), Oman agreed to examine several recommendations relevant to its immigration detention practices.[xix] These included the following:

3. RECOMMENDATIONS FROM OTHER HUMAN RIGHTS BODIES AND CURRENT CONCERNS

3.2 In 2017, the UN Committee on the Elimination of Discrimination against Women recommended that Oman review the de facto kafala system in order to better protect vulnerable migrant workers—particularly women. Noting the fact that migrant domestic workers face charges of “absconding” should they attempt to change employer, the committee recommended that Oman enforce the right to change employers legally, and “ensure that women migrant domestic workers have effective access to justice, including by guaranteeing their safety and residence while legal proceedings are pending.” On the issue of trafficking, the committee also urged Oman to ensure that trafficking victims are exempted from any liability and provided with adequate protection and temporary residence permits.[xx]

3.3 Following its review of the second to fifth periodic reviews of Oman, the Committee on the Elimination of Racial Discrimination encouraged Oman to provide disaggregated data on the number of migrant workers in the country—and in particular, the number of migrant domestic workers. Noting the de facto kafala system and the fact that it places migrant workers in acutely vulnerable positions, the committee recommended that Oman abolish this sponsorship system and substitute it with a framework that guarantees respect for the rights of migrant workers.[xxi]

3.4 In 2016, the UN Committee on the Rights of the Child recommended that Oman respect the rights of children born to both regular and irregular migrant workers. The committee also urged the state to provide safeguards against refoulement that incorporates the best interests of the child in order to better protect refugee and asylum-seeking children. Noting that children have been victims of trafficking in the country, the committee recommended that Oman establish procedures, “for identifying victims of trafficking in persons among all vulnerable populations, including migrant workers, and ensure that the victims of sexual exploitation and trafficking in persons are not punished for acts committed as a direct result of being trafficked, such as immigration violations or prostitution.”[xxii]

3.5 More recently, in April 2020, a coalition of 16 NGOs—including Migrant-Rights.org—urged  Oman to ensure that authorities take appropriate steps to protect migrant workers during the pandemic. Amongst the various recommendations that the coalition made were the call to ensure that all migrant workers have equal access to testing and treatment and that undocumented workers may access treatment without fear of detention and deportation; that sanctions imposed for violating quarantine avoid detention in order to prevent additional overcrowding in detention facilities; that authorities suspend the arrest of workers who are accused of “absconding”; that immigration detainees have access to medical assistance and are released from detention with the possibility of self-isolation where necessary; and that Oman refrain from conducting arbitrary deportations during the crisis.[xxiii]

3.6 In addition to these concerns, the GDP and Migrant-Rights have identified the following on-going issues that may merit attention:

[xx] UN Committee on the Elimination of Discrimination against Women, “Concluding Observations on the Combined Second and Third Periodic Reports of Oman,” 2017, https://bit.ly/3gfymKM

[xxii] UN Committee on the Rights of the Child, “Concluding Observations on the Combined Third and Fourth Periodic Reports of Oman, CRC/C/OMN/CO/3-4,” 14 March 2016, https://bit.ly/31EzJyC