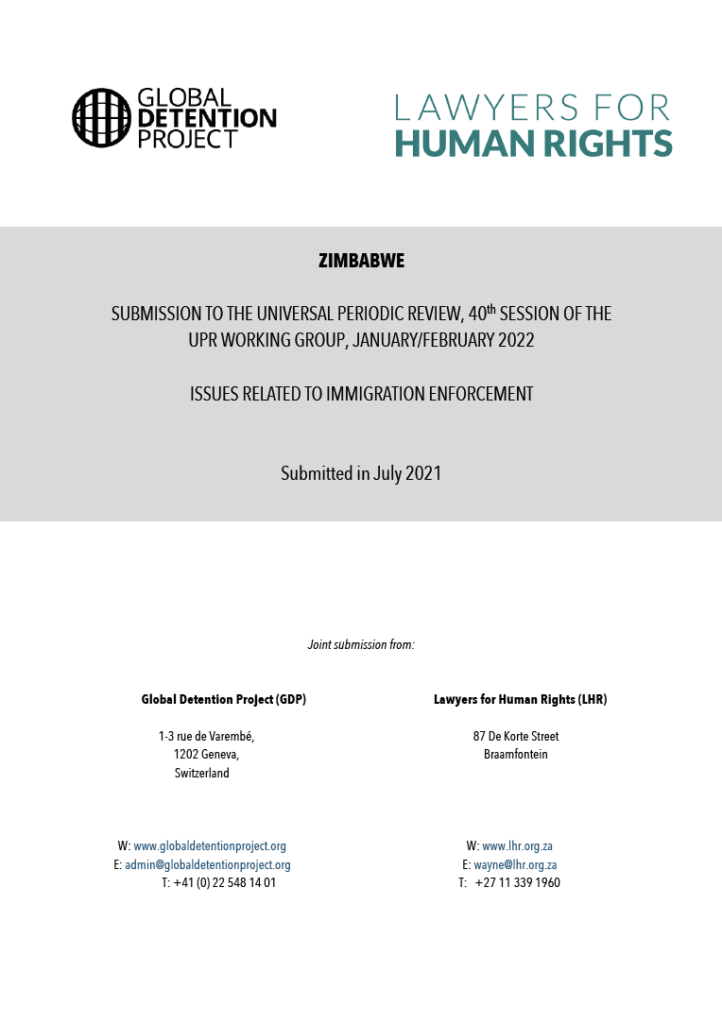 SUBMISSION TO THE UNIVERSAL PERIODIC REVIEW

This submission has been prepared by the Global Detention Project (GDP) and Lawyers for Human Rights (LHR) for the third cycle of the Universal Periodic Review (UPR) of Zimbabwe in January 2022.

Zimbabwe faces a number of migration-related challenges, including significant irregular emigration, transit migration originating elsewhere in Africa en route to South Africa, and refugee arrivals.[1] The country also has a large population of internally displaced people, who numbered more than 270,000 in 2019. According to UNHCR, the country had 9,266 refugees and 11,929 asylum seekers in 2020.[2]

There have been numerous reports in the past indicating the use of migration-related detention measures in Zimbabwe, in particular for migrants en route to South Africa. However, there is little current information about this practice in the country.

There is a need to better understand the situation of people who have been deported back to Zimbabwe from South Africa and other countries in Africa and elsewhere, as well as the long-term impact of these deportation procedures and the treatment of these people once they are sent back to Zimbabwe.

There is little publicly available information detailing the measures—if any—that official agencies have taken to protect people in immigration custody since onset of the COVID-19 pandemic, or amongst other vulnerable citizens including refugees.

The key provisions regulating administrative immigration-related detention in Zimbabwe are provided in the country’s Immigration Act [Chapter 4:02] of 1979, the Refugees Act [4:03] of 1978, and the Immigration Regulations of 1998 (SI 195/1998).

According to Section 9 of the Immigration Act of 1979, “a person may be detained in terms of section eight in a prison, police cell or other convenient place.” Section 8 provides that “an immigration officer may arrest any person whom he suspects on reasonable grounds to have entered or to be in Zimbabwe in contravention of this Act and may detain such a person for such reasonable period, not exceeding fourteen days, as may be required for the purpose of making inquiries as to such person’s identity, antecedents and national status and any other factor relevant to the question of whether such person is a prohibited person.” In addition, Section 8(2) provides that “an immigration officer may – (a) subject to subsection (3), remove or cause to be removed from Zimbabwe any prohibited person; and (b) pending the completion of arrangements for the removal of a person in terms of paragraph (a) and such removal, subject to section nine, detain that person.

According to a 2009 report from the International Organisation for Migration (IOM), 65 people were detained in Zimbabwe for entering irregularly that year, 71 were deported, and 117 were prosecuted. A 2018 report noted that the number of immigration-related detention cases steadily increased from 365 in 2010 to 1,813 in 2014. This trend was reversed in 2015 when the total number of people in detention dropped to 1,381. In 2016 however, the number sharply increased to 2,316. In addition, between 2010 and 2016, the government of Zimbabwe returned 7,196 irregular migrants to 47 different countries.[4] The majority of people deported to Zimbabwe in 2008 were deported from South Africa,[5] while in 2014, the majority of people deported to Zimbabwe were deported from the DRC, and in 2016, from Ethiopia.

In the context of the COVID-19 pandemic, from the commencement of South Africa’s nation-wide lockdown, which lasted from 26 March 2020 to June 2020, 705 Zimbabwean nationals were deported from South Africa.[6]

As part of its COVID-19 response, UNHCR has helped install hand-washing stations in the Tongogara refugee camp and supported more than 1,200 children and young people with home-based learning.[7]

Some pandemic-related measures were also taken in Zimbabwe’s prisons, which are notorious for their poor and unsanitary conditions, including overcrowding and a lack of basic amenities like running water in cells. In March 2020, the government acknowledged that the country’s prisons had a population of 22,000 people despite an official capacity of only 17,000.[8] Between March and June 2020, the government released 4,208 prisoners under a presidential amnesty order. Yet, according to Human Rights Watch (HRW), far too many remained behind bars to allow for social distancing. Lawyers who had visited prisons in Harare in July 2020 told HRW that while masks were being provided, inmates and certain guards did not use them partly due to the lack of information on protective measures against COVID-19.[9]

In October 2020, the Zimbabwean Human Rights NGO Forum and a former prisoner lodged a High Court application seeking to compel the country’s finance minister, Mthuli Ncube, to release funds for prison facilities. The claimants argued that the Zimbabwe Prisons and Correctional Services (ZPCS) failed to comply with basic COVID-19 regulations such as the provision of facemasks, hand sanitiser, and social distancing and requested that the state provide water, food, vehicles, COVID-19 tests, and medical supplies.[10] On 2 December 2020, the High Court ordered the government to ensure that every inmate at the Chikurubi Prison receives 60 litres of water daily and ordered the finance minister to release funds for supplementary water and food supply. The Court also ordered the country’s prison authority to separate healthy inmates from those who are ill and to provide essential medicines.[11] On 27 January 2021, 110 detainees tested positive for COVID-19 at the Mutimurefu prison—one of the most overpopulated in the country.[12] Two weeks prior, a senior officer at the Chikurubi prison died from the virus and 15 guards in that prison tested positive for COVID-19.[13]

3. RECOMMENDATIONS DURING THE 2ND CYCLE OF UPR

During the 2nd cycle of the Universal Periodic Review (UPR) of Zimbabwe (34th Session, February/March 2017) Zimbabwe agreed to examine several recommendations.[14] These included:

4. RECOMMENDATIONS FROM OTHER HUMAN RIGHTS BODIES

In 2016, the Committee on the Rights of the Child (CRC) recommended that the State party: “(a) Take measures to ensure that all children born in the State party have the legal right to be registered at birth with a name, regardless of their parents’ citizenship status and/or country of origin, and that they have equal access to health care, protection, education and other social services; (b) Consider ratifying the 1961 Convention on the Reduction of Statelessness and amend its domestic legislation on nationality accordingly so as to ensure that every child enjoys the right to acquire a nationality.”[15] The CRC also urged the State party to “(f) Continue the Pretrial Diversion Programme and ensure that children have access to alternative disciplinary measures to deprivation of liberty, such as probation, mediation, counselling or community service, and ensure that detention is used as a last resort; (g) Establish child-sensitive complaint mechanisms regarding ill-treatment and torture of children in police custody and detention; (h) Ensure the independent monitoring of places where children are deprived of their liberty.”[16]

In its concluding observations of 2020, the Committee on the Elimination of Discrimination against Women (CEDAW) recommended that Zimbabwe “Promote the use of alternatives to detention, especially for pregnant women, mothers of young children and women heads of household, improve the conditions in female detention facilities in accordance with the United Nations Rules for the Treatment of Women Prisoners and Non-custodial Measures for Women Offenders (the Bangkok Rules) and enhance the measures to protect women in detention from gender-based violence, including through regular monitoring and independent and confidential complaint mechanisms.”[17]

Since the second cycle of the UPR (34th Session, February/March 2017), Zimbabwe has yet to ratify the International Convention on the Protection of the Rights of All Migrant Workers and the Convention against Torture and Other Cruel Inhuman or Degrading Treatment or Punishment.

Based on the information provided above, Zimbabwe should consider implementing the following measures to bring it in line with its international obligations and improve its human rights record with respect to vulnerable migrants, refugees, and asylum seekers:

[17] UN Committee on the Elimination of Discrimination Against Women, “Concluding Observations on the Sixth Periodic Report of Zimbabwe,” CEDAW/C/ZWE/CO/6, 10 March 2020, https://tbinternet.ohchr.org/_layouts/15/treatybodyexternal/Download.aspx?symbolno=CEDAW%2fC%2fZWE%2fCO%2f6&Lang=en