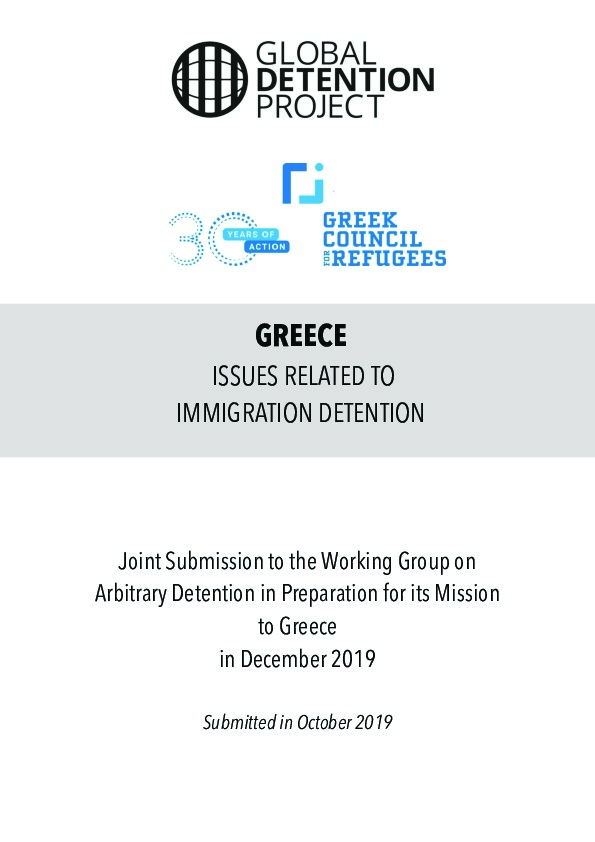 The Global Detention Project (GDP) and the Greek Council for Refugees (GCR) are pleased to provide the Working Group on Arbitrary Detention (WGAD) the following submission in preparation for its visit to Greece in December 2019. The submission concerns the detention of migrants and refugees and mainly addresses situations that fall within the scope of the WGAD’s Category IV of types of arbitrary detention, namely: “when asylum seekers, refugees or migrants are subjected to prolonged administrative custody without the possibility of administrative or judicial review or remedy.”

Following the WGAD’s visit to Greece in January 2013, the Working Group issued a number of recommendations relating to immigration detention.[1] In addition to highlighting critical new concerns that have emerged since the 2013 visit, this submission provides some details that may assist the WGAD in assessing whether its previous recommendations have been implemented in light of the WGAD’s Revised Deliberation No.5.

The key recommendations from 2013 were:

Similar recommendations were recently formulated by other international monitoring bodies. Following his mission to Greece in May 2016, the UN Special Rapporteur on the human rights of migrants (SRHRM) urged Greece to consider alternatives to detention, order detention based on individual assessment, refrain from detaining unaccompanied children and families with children, improve detention conditions and procedural safeguards, ensure independent monitoring of the centres, and ensure that immigration detainees have access to lawyer, can promptly contact their families, have access to their mobile phones, access to doctor and interpreter, and can challenge their detention.[2]

Since the WGAD’s visit to Greece, three UN treaty bodies have issued specific recommendations to Greece, namely the Committee against Torture (CAT) in 2019, the Committee on the Elimination of Racial Discrimination (CERD) in 2016, and the Human Rights Committee (HRC) in 2015.

The CAT recommended that Greece refrain from detaining asylum seekers and irregular migrants for prolonged periods, use detention as a measure of last resort and for the shortest period possible and continue the application of non-custodial measures, ensure that immigration detainees have access to counsel; guarantee judicial review to challenge the legality of detention; ensure adequate living conditions in all immigration centres; ensure adequate medical and mental health care to detainees; establish an effective and independent oversight mechanism giving possibility to detainees to bring complaints; ensure that all allegations of torture and ill-treatment by law-enforcement officials are promptly, thoroughly, and impartially investigated by the authorities, that the perpetrators are prosecuted, and if found guilty, punished and that victims are provided with redress. The Committee also urged Greece to ensure that children are not detained solely because of their immigration status and cease detaining migrants and asylum seekers, especially unaccompanied children, in police holding cells (§ 21 and 23).[3]

The CERD urged Greece to eliminate the automatic detention of migrants arriving on the islands after the conclusion of the statement by the European Union and Turkey on migration, introduce alternatives to detention, ensure that those deprived of their liberty enjoy due process and take measures to convert the reception and identification centres on the islands into open centres (§ 23).[4]

The HRC called upon Greece to ensure that detention of all irregular migrants is necessary and proportionate and for the shortest possible period of time, and that alternatives to detention are available in law and implemented in practice. The Committee also recommended ensuring decent living conditions in detention centres, by providing adequate health care services, food, and sanitary conditions (§ 28).[5]

Despite the intense and ongoing international attention that Greece has received since the WGAD’s visit in 2013, it is widely documented that the issues the WGAD and other human rights bodies have addressed during these years with regards to immigration detention remain relevant today. At the same time, new issues have emerged, including as a result of the 2016 EU-Turkey Statement (commonly referred to as the “EU-Turkey deal”) and the closure of the so-called Balkan corridor in 2016, both of which had important impacts on detention practises on both the islands and the mainland. Also importantly, legislative amendments presented by the Greek Government in October 2019 would, if adopted, lead to drastic changes with regards to the detention of asylum seekers.

It should be emphasised that Greece faces a disproportionate burden as one of the key entry points into the EU, a burden that is compounded by the Dublin Regulation, which allows other countries to transfer people back to Greece.[6] Hence, the policies of the EU and other member states have been important contributing factors in the predicament non-citizens face in Greece.

During its previous visit, the WGAD visited detention centres in Thessaloniki, Filakio, and Komotini, as well as Soufli border guard station. The WGAD noted that detention conditions in all these facilities were inadequate, in particular as regards lighting, temperature, and food supply. Migrants were mostly locked in their cells, with no recreational activities nor outdoor area. The centres in Fylakio and Thessaloniki were overcrowded.

In April 2018, the CPT visited Greek immigration detention facilities, including five dedicated immigration detention centres (pre-removal centres in Amygdaleza, Fylakio, Moria (Lesvos), and Pyli (Kos), as well as Fylakio Reception and Identification Centre) and seven police and border guard stations which can also detain migrants and asylum seekers (Drapetsona, Kolonos, and Omonia in Piraeus/ Athens and Feres, Isaakio, Neo Cheimonia, and Soufli in Evros). The CPT expressed serious concerns regarding the conditions and detention regimes in both dedicated detention centres and police and border guard stations. Most of these facilities were found to be unhygienic, in a poor state of repair, and did not offer sufficient bedding and lighting. Despite the CPT’s stance, non-citizens were frequently detained in police stations for extended periods. There were also reported instances of ill-treatment at the hands of guards and health care was inadequate.[30]

During his 2016 visit, the SRHRM visited the hotspots on Samos and Lesvos, Elliniko pre-removal centre (no longer in use, as of 2018), and Polykastro police station. The Special Rapporteur found that access with the outside world was difficult as mobile phones were confiscated, Elliniko centre did not offer adequate health care and activities, and the RICs offered inadequate conditions.

In light of the concerns expressed by the Working Group in 2013 and other international monitoring bodies, the WGAD may wish to pay particular attention to issues of overcrowding; hygiene; provision of clean bedding and clothes; adequate food; separation of women and men, as well as children from unrelated adults; sufficient lighting; freedom of movement within the facility; outdoors time; and recreation activities. Detention conditions are of particular concern at: the Tavros (Petrou Ralli) PRDF, which according to the CPT, due to its “carceral design,” is “totally inadequate for holding irregular immigrants for short periods of time, let alone weeks or months”;[31] the Thessaloniki Special holding facility for irregular migrants, known as “Metagogon” (Transfer) Centre, where a significant number of persons are detained for prolonged periods without being provided with any outdoor exercise;[32] the sections for unaccompanied minors and families at the Amigdaleza PRDF; and the police stations in Athens and Thessaloniki region. As mentioned above, no doctor is present in Moria (Lesvos), Kos, and Paranesti (Drama) PRDF, as of October 2019.

To facilitate the WGAD’s identification of facilities that are used for the purposes of immigration detention in Greece, this submission provides a non-exhaustive list of facilities that the GDP and/or the GCR have identified in the below table.

[4] UN Committee on the Elimination of Racial Discrimination (CERD), “Concluding Observations on the Twentieth to Twenty-Second Periodic Reports of Greece, CERD/C/GRC/CO/20-22,” 3 October 2016, https://www.ohchr.org/EN/Countries/ENACARegion/Pages/GRIndex.aspx

[8] Working Group on Arbitrary Detention (WGAD), “Revised Deliberation No. 5 on Deprivation of Liberty of Migrants,” 7 February 2018: “Any form of detention, including detention in the course of migration proceedings, must be ordered and approved by a judge or other judicial authority.”

[13] UN High Commissioner for Refugees (UNHCR), “Recommendations by the Office of the United Nations High Commissioner for Refugees Concerning the Execution of Judgments by the European Court of Human Rights in the Cases of M.S.S. v. Belgium and Greece and of Rahimi v. Greece,” https://search.coe.int/cm/Pages/result_details.aspx?ObjectId=090000168094938c; Greek Council for Refugees (GCR), “Administrative Detention in Greece: Findings from the Field, 2018.”

[16] Greek Council for Refugees (GCR), “AIDA Report on Greece, Update 2018,”; see also: “Submission by the UNHCR in the case of International Commission of Jurists (ICJ) and European Council for Refugees and Exiles (ECRE) v. Greece (Complaint No. 173/2018) before the European Committee of Social Rights,” August 2019, https://rm.coe.int/cc173casedoc5-en-observations-by-the-unhcr/168096c416

[19] ECSR, International Commission of Jurists (ICJ), and European Council for Refugees and Exiles (ECRE) v. Greece, Complaint No. 173/2018, Decision on admissibility and on immediate measures, 23 May 2019.

[26] The number of health care staff in PRDFs is insufficient. For example, out of the total 20 advertised positions for doctors in pre-removal centres, only nine were actually present as of the end of 2018, and as of October 2019, no doctor is present in Moria (Lesvos), Kos, or Paranesti (Drama) PRDF.

[28] See: European Committee for the Prevention of Torture and Inhuman or Degrading Treatment or Punishment (CPT), “Immigration Detention, CPT/Inf(2017)3,” March 2017.

[29] CNN, “The Four Axes of the Government with Regards the Migration Issue,” 4 October 2019, https://www.cnn.gr/news/politiki/story/192839/petsas-aytoi-einai-oi-tesseris-axones-tis-kyvernisis-gia-to-metanasteytiko