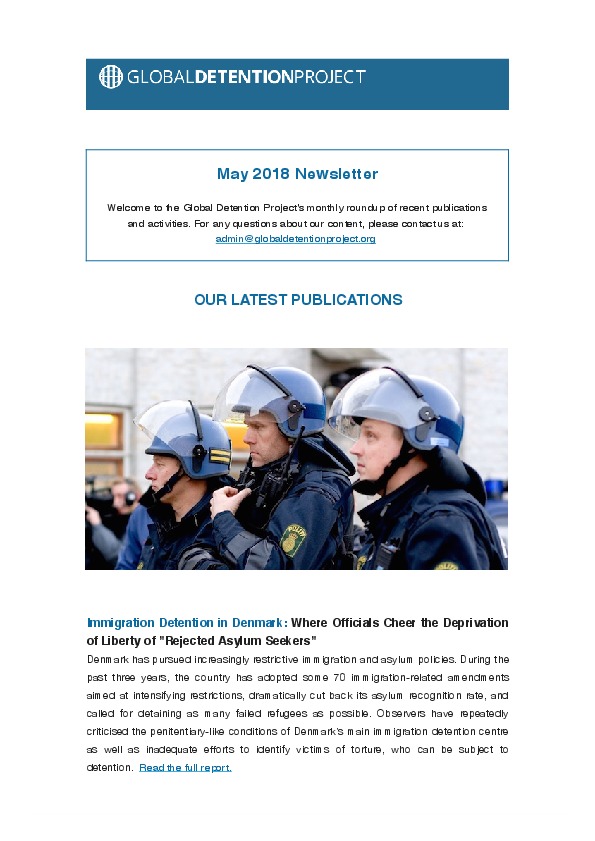 Welcome to the Global Detention Project’s May 2018 newsletter. For any questions about our content, please contact us at: admin@globaldetentionproject.org

Immigration Detention in Denmark: Where Officials Cheer the Deprivation of Liberty of “Rejected Asylum Seekers”
Denmark has pursued increasingly restrictive immigration and asylum policies. During the past three years, the country has adopted some 70 immigration-related amendments aimed at intensifying restrictions, dramatically cut back its asylum recognition rate, and called for detaining as many failed refugees as possible. Observers have repeatedly criticised the penitentiary-like conditions of Denmark’s main immigration detention centre as well as inadequate efforts to identify victims of torture, who can be subject to detention.  Read the full report.
Physical Fences and Digital Divides: A GDP Special Report. Part I: Exposing the “Crisis”
Since the “refugee crisis” exploded across the international media and political landscapes, the role of social media has been repeatedly dissected, argued over, and—more often than not—misunderstood. This special report explores how people use social media during their migration journeys, with a special emphasis on their use in the context of detention and migration control in North Africa and the Mediterranean. Part I, “Exposing the ‘Crisis,’” charts the historical relationship between migration and social media, reviewing the various tech responses to the “crisis” and highlighting the importance of human-centred design of new technologies. Read Part I of the Special Report.

While deportation, detention, and border-control policies are by no means new, there has been a clear surge in emphasis on these policies in recent years. In their chapter for the 2018 volume Immigration Policy in the Age of Punishment: Detention, Deportation, and Border Control (edited by David C. Brotherton and Philip Kretsedemas), the GDP’s Executive Director Michael Flynn and Contributing Researcher Matthew Flynn examine the factors that have spurred the global growth of immigration detention. The authors advance an actor-oriented analysis that views detention systems as complex organisations that rely on institutional and legal structures to buttress their existence, count on multiple sources of financing to grow operations, and receive support from a broad range of social actors who have both diverging and overlapping motives for promoting expansion of this tool of social control. More information is available here.

The Effectiveness of the EU Return Policy at All Costs: The Coercive Use of Administrative Pre-Removal Detention

In February 2017, the European Commission adopted a specific Recommendation to guide EU states in the interpretation of the Returns Directive, which stressed that detention can be essential in enhancing the effectiveness of the return system. However, despite its administrative label, pre-removal detention as interpreted by the commission contains punitive elements. GDP Researcher Izabella Majcher explored this issue at the “Understanding Causes and Consequences of Criminalization of Migration” conference in Ljubljana, Slovenia, co-hosted by the Peace Institute, the Institute of Criminology at the Faculty of Law Ljubljana, and the International Law Association of Slovenia. Majcher argued that employing detention as recommended by the commission is a manifestation of the phenomenon of “crimmigration”—or, the convergence of immigration and criminal law. More information is available here.