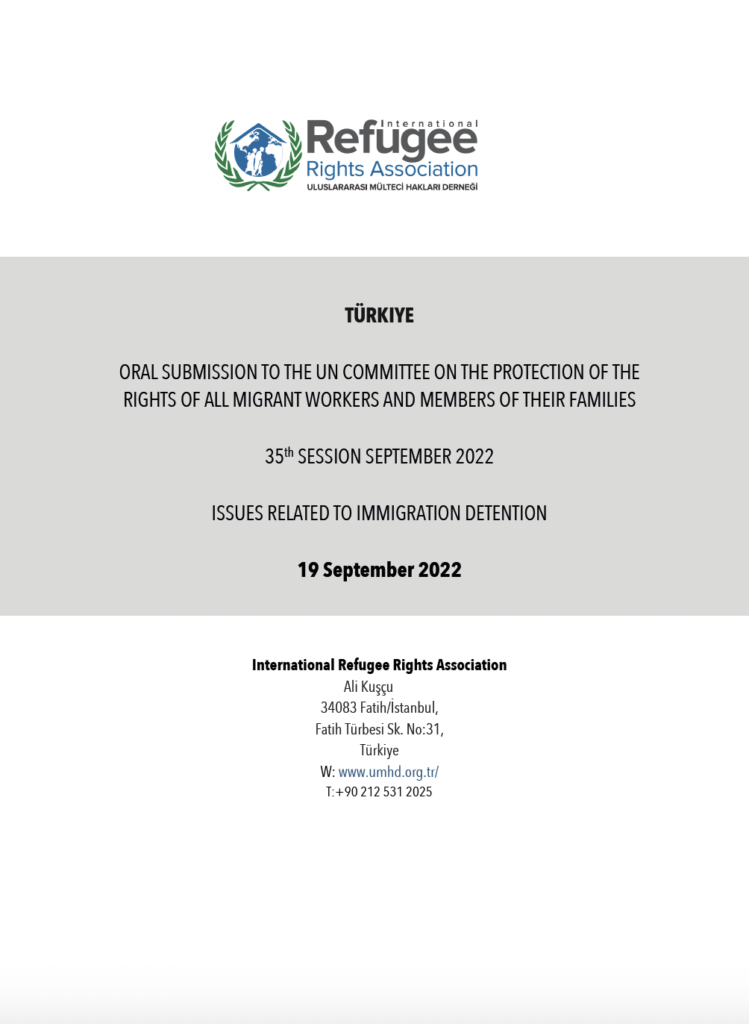 On Monday 19th September, the GDP’s Türkiye-based partner – the International Refugee Rights Association (IRRA) – delivered a virtual presentation at the 35th Session of the UN Committee on the Protection of the Rights of All Migrant Workers and Members of their Families. This oral submission drew the committee’s attention to Türkiye’s laws and practices concerning detention for immigration related reasons, following-up on information provided by the GDP and IRRA in their joint written submission. The IRRA’s oral statement is provided below:

The International Refugee Rights Association (IRRA) was established in 2013 by legal practitioners following a mass influx of refugees into Türkiye, with the aim of defending their legal rights and promoting legal regulations and their implementation in line with international standards.

With our joint submission with the Global Detention Project and in my present statement I would like to draw your attention to the state party’s laws and practices concerning detention for immigration related reasons, and in light of the CMW’s recent authoritative General Comment No. 5 on migrants’ rights to liberty and freedom from arbitrary detention.

According to UNHCR, Türkiye currently hosts four million refugees and for the last seven years, has hosted the largest number of refugees worldwide. Türkiye has one of the world’s largest immigration detention systems, which is comprised of “removal centres,” ad hoc detention sites along its borders, transit facilities in airports, and police stations in 27 different locations, three of which are in Istanbul.

Turkish law specifies that decisions to hold foreigners under administrative detention must be based on specific criteria, including conditions of necessity and the possibility of deportation. An administrative detention decision can last for up to one year. However, once released after one year, many migrants are re-detained creating a loophole in the execution of these limits.

As Türkiye’s immigration detention capacity grows, there is a notable divide between those detention centres that provide adequate living conditions and those that do not meet EU regulation standards.  Lawyers representing clients in detention centres report numerous concerning situations at some centres, including the fact that some detainees have to share a small room with several people and some are denied acccess to outside space.

Detainees also face considerable obstacles in accessing legal assistance. Detention centres and immigration authorities do not provide detainees with a lawyer or translator and detainees lack knowledge about available legal aid. Authorities in the detention centres say that detainees have access to telephones in the visiting rooms where there is a list of translators; however lawyers claim that the telephones often do not work and translators are never provided.

The IRRA research and reporting department met with four different lawyers who are experts in the law of foreigners, to understand the detention conditions of refugees and migrants in immigration detention. According to lawyers the detained migrants and refugees are informally categorised into two groups. Migrants in the first group are detained because they have committed a criminal or an immigration offence (for example, visa overstayers or working without a valid permit); while those in the second group are labelled as Yabancı Terörist Savaşçı (YTS) (Foreign Terrorist Fighters) by the Turkish authorities. While the term YTS has no legal basis, it is used by the Presidency of Migration Management and law-enforcement officers to refer to suspected “foreign terrorist fighters.” It is codified as G-87 in official documents. In the interim decision of İzmir 9th High Criminal Court dated 18/11/2020 with the basis number 2020/79, the Presidency of Migration Management was instructed to refrain from using the label YTS, however lawyers report that to date the practice is continuing.

Türkiye continues to detain accompanied and unaccompanied children and their families, mothers with children, and pregnant and nursing women in some cases. This is in violation of international standards and guidance that children should never be detained for migration-related reasons, or because of the migration status of their parents;  and that mothers with children, pregnant women, and nursing mothers should not be detained for migration-related reasons.