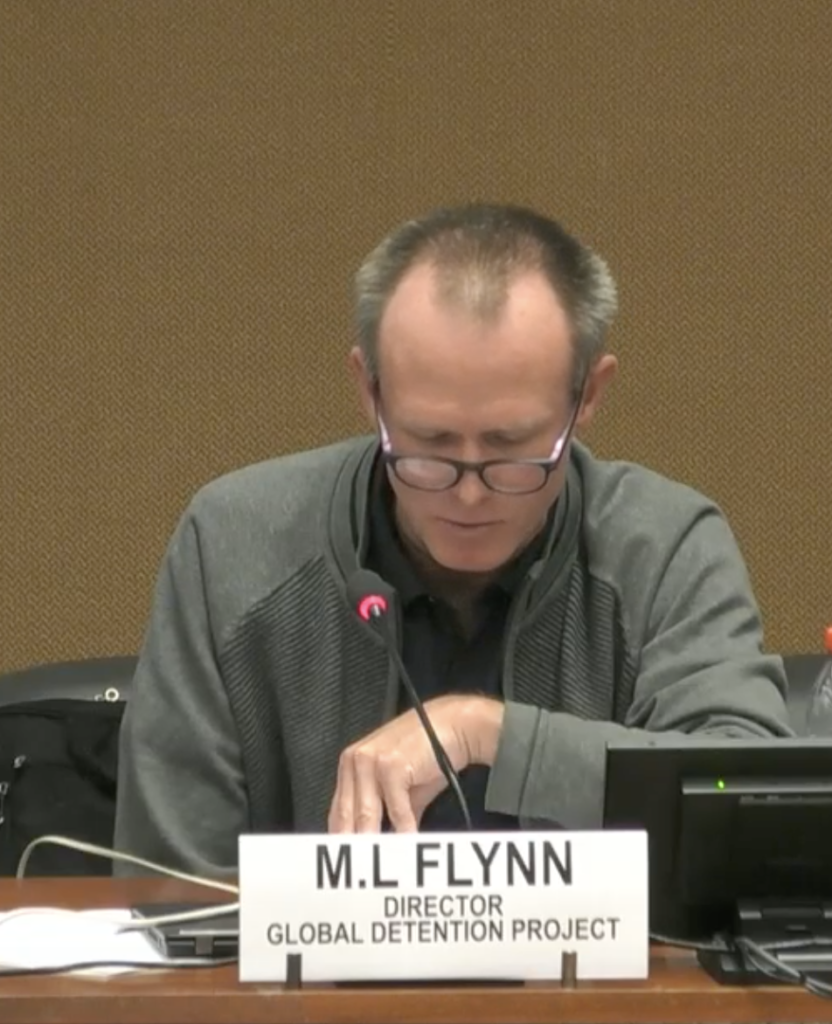 Reiterating points raised by the GDP in its written submission to the CMW, Flynn provided comment on three aspects of the GCM that concern migration-related detention – alternatives to detention, the detention of children, and criminalisation of migration-related violations. The GDP also invited our partner, Migrant-Rights.org (Rima Kalush), to join us at the CMW event to share their concerns about the lack of space and opportunity for civil society organisations to review states’ implementation of the GCM.

Read the full text of Flynn’s and Kalush’s presentations below.

“I would like to thank the Committee for inviting me to provide comments today concerning its development of General Comment No.6 on the convergence between the Global Compact for Migration and the Convention on the Rights of Migrant Workers. I would also like to thank the Committee for undertaking this initiative as it presents an opportunity for the Committee to provide important explanatory and normative context for the Global Compact’s “Objectives.” I will focus my comments on three aspects of the Compact that concern migration-related detention: (1) alternatives to detention, (2) the detention of children, and (3) criminalisation. After making my comments, I will yield the remaining time that the Committee has provided the GDP to our partners at Migrant-Rights.org, who will address related aspects and concerns regarding the GCM process as it compares to the UN human rights system.

With respect to alternatives to detention (ATDs), the Global Detention Project’s main concern is to optimize their use for preventing arbitrary migration-related detention. However, we are concerned that the way ATDs are framed in the Compact and in the guiding documents of the UN Network on Migration this objective is not emphasized. In fact, they are not carefully defined at all, which could encourage detrimental uses of ATDs, including leading to the creation of harmful migrant surveillance systems while doing nothing to minimize the use of detention itself. The United States presents a revealing case in point of the unintended consequences of an open-ended framing of ATDs: US Immigration and Customs Enforcement describes ATDs as “technology and other tools to manage undocumented individual’s compliance with release conditions while they are on the non-detained docket. It is not a substitute for detention, but allows ICE to exercise increased supervision over a portion of those who are not detained” [emphasis added]. Recent results from the US ATD program reveal a disconcerting picture of a growing ATD surveillance program that has no appreciable impact on the numbers of people placed in detention: As of 2020, there were some 92,000 people in ATD programs, while 183,000 were placed in detention. By 2021, the ATD program had grown to include 136,000 people, who had been under some form of ATD surveillance for on average 615 days, while the numbers of people in detention grew to 189,000 people.

We think that this result in the US is in part due to the fact that the US frames ATDs in a way that is largely in-line with what is provided in the Global Compact and by the Network for Migration. While the Network has helpfully asserted that electronic forms of surveillance like ankle bracelets should not be used as ATDs, it has neglected to characterize ATDs as legally established mechanisms whose sole legitimate purpose is to offer states practical alternatives to states for people who are in lawful detention procedures. It is in this that ATDs serve to limit arbitrary detention and ensure that detention is necessary and proportionate in each instance. We are concerned that this failure could ultimately encourage more states to use ATDs in the same way as the United States.

We urge the Committee on Migrant Workers to use General Comment No. 6 to provide an important corrective to this discussion. It could do this by re-iterating its formulation of ATDs as provided in its previous General Comment No.5 on the right to liberty: “The Committee understands as alternatives to detention all community-based care measures or non-custodial accommodation solutions … that are less restrictive than detention and which must be considered in the context of lawful detention decision procedures to ensure that detention is necessary and proportionate in all cases. In cases where detention no longer has a legal basis … alternatives to detention are no longer applicable” [emphasis added].

Secondly, concerning children in detention, the Global Compact does not reflect the growing international consensus of this norm as it relates to immigration detention—that the “best interests” norm requires states not to detain children for immigration reasons. Instead, the GCM calls on states “to work” to end this practice, including by ensuring the availability of alternatives to detention, which implies that detention of children may still be used as a “last resort” and that children may remain under the overall care and supervision of immigration authorities and their needs superseded by migration policy objectives. While this lacuna in the Global Compact is an important gap, it does not necessarily represent a complete divergence between the GCM and the relevant human rights conventions. We encourage the Committee to instead view these gaps in the GCM as an opportunity to articulate for member states of the Compact the full meaning and significance of the “best interests” norm, framing it as an effort to assist states in understanding already existing legal obligations that are only partially reiterated in the Compact.

Finally, although the GCM calls on states to “avoid criminalisation of migrants who are victims of trafficking,” it fails to explicitly call for the decriminalisation of irregular migration. This lacuna in the Global Compact contrasts with existing international norms and authoritative opinions. It also reflects a potential internal tension in the GCM, including in particular with provisions in Objective 13 that call on states to take a “human-rights based approach to any detention of migrants, using detention as a last resort.” To the extent that states continue to impose criminal sanctions and penalties for irregular entry and stay, including detention and incarceration, they are arguably unable to fully implement a “human rights based approach” to migration-related detention. Deprivation of liberty may also not be applied only as a “last resort” if it is a legally established criminal punishment, which arguably also is counter to Article is counter to Article 10 of the Convention prohibiting “cruel, inhuman, or degrading treatment of punishment.”

In contrast, the CMW has repeatedly called for states to de-criminalise irregular entry and stay, including most recently in General Comment No.5, which says that these infractions “constitute at most administrative offences and should never be considered criminal offenses as they do not infringe fundamental legally protected values, and as such are not crimes per se against persons, property or national security” (Paragraph 36).

We encourage the Committee to address this gap in the GCM by framing its corresponding recommendations as authoritative clarifications of the content of relevant GCM provisions, in particular including provisions in Objective 11 concerning border management policies. With respect to Paragraph 27c of the GCM, the Committee could emphasize that the GCM’s advice that states revise their border screening procedures according to international human rights law in effect requires states to not criminally prosecute irregular border crossers in view of the consensus that such prosecution exceeds any legitimate purpose of the state. Likewise, with respect to GCM Paragraph 27f, which calls on states to revise laws to ensure that “sanctions are appropriate,” the Committee should stipulate that laws that criminalise irregular entry or presence are contrary to fundamental human rights norms and refugee law, and that although the GCM does not explicitly call for decriminalisation, the framing of this provision in the Compact inherently implies that member states undertake such reforms.”

“My thanks to the Committee for allowing us time to speak today. I am here on behalf of Migrant-Rights.org, an advocacy organisation working to advance the rights of migrants in the Gulf Cooperation Council countries, a region that hosts over 10% of the world’s migrant workers. Migrants constitute 60-90% of the population in these countries, yet they often claim to have no migrants — only “temporary contract labourers.” This term is deployed to bypass obligations to migrants under international law, stemming from the misunderstanding that migrants are granted many ‘special rights’ rather than guaranteed the same human rights as other individuals.

None of these countries have ratified the ICRMW, but are signatories of the GCM and active participants in related projects and fora where use of the term “temporary contract labourers” is increasingly normalised. This worrying trend in global discourse reflects the move away from a rights-based approach to migration that is firmly grounded in international law, towards the ‘management’ of migration with only loose references to human rights standards.

The subject of immigration detention is another case in point: while objective 13 of the Compact more or less aligns with international norms on arbitrary detention, the absence of a clear reference to the binding standards that inform the objective is concerning. Attempts by states to soften commitments to ending child detention during the IMRF, for example, concretised one of the primary concerns of migrant rights advocates – that the Compact may undercut other binding mechanisms by essentially recasting international legal standards as optional and negotiable.

While the language of the compact itself includes safeguards against regression, it must be reinforced by a stronger review process that includes both a closer collaboration of the whole UN system, and more meaningful participation from other stakeholders, including civil society.

Integrating GCM reviews into the UPR process and treaty body reviews would ensure that the deliberation on migration issues remain within the UN framework, and avoid parallel reporting systems that dilute the advocacy capacity of civil society organisations with limited time and resources. As the Compact acknowledges, addressing migration requires a whole-of-society approach, and as the committee is aware, what states report is not always the full story. Organisations like ours, which work in very constrained spaces, rely on the independent and inclusive processes of the Treaty Bodies and the UPR to push for state accountability. While the GCM review process does invite civil society and other relevant stakeholders to the table, our conversations are often one-sided and our insights do not meaningfully inform regional reports, which lack the independence that characterize reporting in other UN mechanisms.

The opportunity the GCM provides to bridge the fragmentation of human rights instruments can only be accomplished if state reports are assessed for their full human rights impact. Doing so should include developing a human rights index to ensure progress on objectives that are consistent with human rights principles, and must include a greater role for the treaty bodies, and the CMW in particular, in the review and implementation process.

These are just a few examples of the substantial revision to the GCM review process required to ensure that the Compact lives up to its intent and complements, rather than undermines, other human rights instruments.”

Written Submission to the UN Committee on Migrant Workers: General Comment No.6 on the Convergence of the International Convention on the Rights of Migrant Workers and the Global Compact for Migration