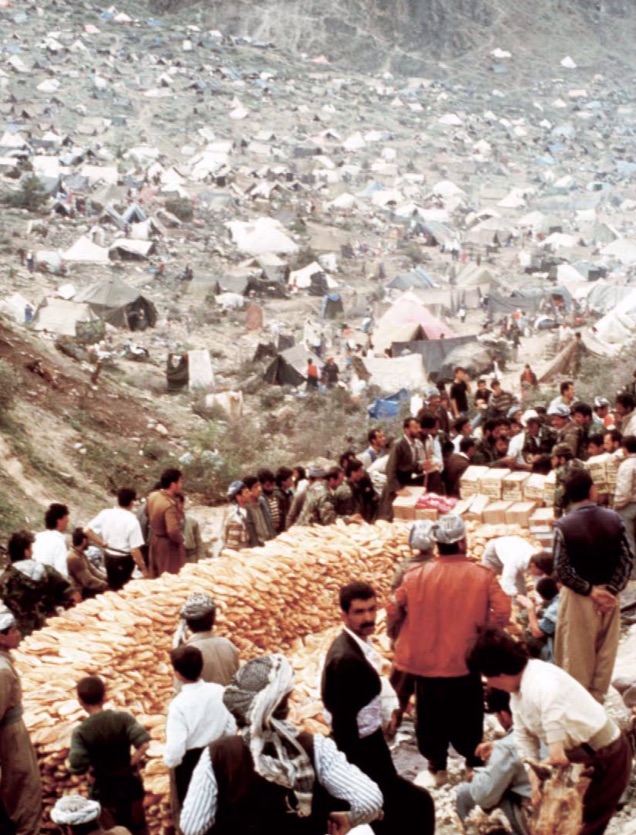 Most of the world’s up-rooted are migrants—people who have left their countries in search of food, better living conditions, jobs, or to be with family members. Who deserves protection? What responsibilities should governments and the international community shoulder? How can refugee protection efforts be fine-tuned? What is the price we pay for not coming to the aid of displaced people? And if, as many believe, the number of uprooted continues to grow, how will the protection regime need to evolve?

YOU’LL FIND THEIR NAMES ON PAGE TWO of every issue of the Bulletin of the Atomic Scientists: Albert Einstein, Hans Bethe, Rudolf Peierls, Leo Szilard, Victor Weisskopf, and James Franck. Besides having served on the Bulletin’s board of sponsors, these individuals share much in common. They were some of the most distinguished physicists of the twentieth century. All except Einstein were members of the Manhattan Project, the secret U.S. government program that produced the first atomic bombs; all were involved in efforts to fight the spread and use of nuclear weapons after World War II; and all fled their countries because of Nazi persecution.

In other words, these men were refugees. But at the time of their flight—in the 1930s—there was no established international system aimed at aiding and protecting those who were forcibly displaced from their homes and coun- tries. While these scientists were among those who were able to find refuge abroad, by the end of World War II, Europe had more than 40 mil- lion displaced persons. To tackle this humanitarian crisis, the League of Nations—and later, the United Nations—established a series of temporary agencies that distributed emergency aid and assisted repatriation.

Although these agencies had some success—for example, the United Nations Relief and Rehabilitation Administration, established in 1943, repatriated 7 million European civilians during the five-month period following the end of the war—the Cold War quickly intervened. How could a humanitarian relief agency justify repatriating refugees to Soviet-bloc or communist-controlled East European countries, where they often faced political repression and sometimes life in a labor camp? As refugee policy shifted from repatriation to resettlement, the Soviet Union grew increasingly critical, arguing that Western countries were sheltering subversives and looking for cheap labor.

Then, in 1950, the United Nations created a durable and lasting relief organization—the U.N. High Commissioner for Refugees (UNHCR). Initially given a three-year mandate to help resettle those still displaced from the war, UNHCR has grown into one of the world’s chief humanitarian agencies, every year aiding mil- lions of displaced persons in more than 100 countries. Working in tandem with various sister agencies—the World Food Proram, the U.N. Development Program, and the World Health Program, among others—as well as some 500 non-governmental organizations, UNHCR has assisted more than 50 million people during the past half-century.

In 1951, the United Nations adopted the Convention Relating to the Status of Refugees—the first international treaty to clearly define who refugees are, their rights, and the obligations of countries. According to the convention, a refugee is a person who “owing to a well-founded fear of being persecuted for reasons of race, religion, nationality, membership of a particular social group, or political opinion, is outside the country of his nationality, and is unable to or, owing to such fear, is unwilling to avail himself of the protection of that country.” Of the obligations placed on host countries, the most important was the promise not to forcibly return refugees to their countries of origin—the principle of non-refoulement.

For convention drafters, however, not all refugees were created equal. Despite burgeoning refugee crises in Asia at the time, the convention was limited mainly to Europeans displaced before 1951. In 1967, as crises erupted in Africa and other parts of the world, the United Nations adopted the Protocol Relating to the Status of Refugees, which removed these time and geographical limits. (As of August 2002, 144 countries had signed the 1951 convention and/or its protocol.)

Various regional treaties soon expanded the definition of a refugee. In 1969, the Organization of African Unity adopted a convention that extended refugee status to those fleeing their countries because of “external aggression, occupation, foreign domination, or events seriously disturbing public order.” For the first time, violent conflict—and not just persecution—was explicitly recognized as being a reason to grant refugee status. In 1984, 10 Latin American countries adopted the Cartagena Declaration on Refugees, which also recognized those fleeing conflict. Although the 1951 convention’s definition was never expanded to include conflict, according to UNHCR those fleeing war or war-related conditions “are in need of international protection and should be considered refugees.”

The end of the Cold War brought additional changes to the international refugee protection regime. With the breakup of the Soviet Union, millions of people in the former Soviet republics found them- selves without citizenship status. In response to this and similar problems in parts of Europe and Asia, in 1995 the U.N. General Assembly asked UNHCR to support stateless people.

The changing nature of conflict in the post-Cold War period—more internal and ethnic conflicts, fewer interstate wars—helped focus the international community’s attention on the plight of internally displaced persons (IDPs). In 1993, the U.N. General Assembly established a set of requirements to guide the high commissioner’s IDP efforts—the agency must be explicitly asked by the U.N. Secretary-General to intervene and it must have the consent of the concerned country.

TODAY, THE INTERNATIONAL REGIME to protect displaced people continues to evolve as new problems surface, the numbers of displaced increase, and host countries rethink their roles.

Of the more than 6 billion people on the planet, some 240 million—or 1 in 25, a staggering number—are uprooted, mostly as a result of armed conflict, religious or political persecution, racism, poverty, or ecological destruction. Fewer than 20 million of the uprooted are considered “of concern” by the UNHCR and receive assistance. This includes 12 million refugees; nearly 500,000 returned refugees (“returnees”); about 1 mil- lion asylum seekers; and more than 6 million IDPs and “others of concern,” including stateless persons and war-affected populations.

But what about the rest? It is hard to fault the agency for not doing more. After all, governments pay most of UNHCR’s $1 billion-a-year budget and support its mandate. And increasingly, governments from Europe to Asia to the Americas are balking at their responsibilities vis-à-vis displaced people—and reducing the size of their UNHCR contributions. The United States routinely detains potential asylum seekers off-shore, preventing them from applying for refugee status; in Britain, which complains of a ten-fold increase in asylum applicants since 1988, government ministers charge that the 1951 convention is outdated; and in Australia, immigration officials criticize UNHCR for having a double standard, “[spending] cents a day looking after people in Africa [while] we spend tens of thousands of dollars on people in developed countries who have been free enough to travel and had the money to engage people smugglers.” Further aggravating the situation, officials across the globe have argued since last September’s attacks that asylum policies provide convenient cover for terrorist activities.

The fact is, the vast majority of refugees live in hastily established camps located in the world’s most underdeveloped countries. As the Forced Migration Review reports on its Web site, “Refugee burden-sharing is highly unequal.” At the end of 2001, Iran was hosting one refugee for every 26 citizens; Lebanon, one for every 11. In Britain, however, the number is one for every 972. “The European Union, a collection of some of the richest countries in the world, hosts less than 5 percent of the world’s refugee population.” Aware of this unequal distribution, under- developed countries are growing increasingly reluctant to accept refugee flows.

Further, most of the world’s up-rooted are migrants—people who have left their countries in search of food, better living conditions, jobs, or to be with family members. Millions of others are so-called environmental refugees, who have fled ecological destruction or large-scale development projects (according to some estimates, climate change and environmental degradation could displace as many as 150 million more by 2050). Then there are the estimated 25 million people internally displaced because of violence or persecution, of whom only a fraction receive aid from UNHCR. For most of these people, the international community and individual countries provide little or no assistance.

Still, this tremendous assembly of people on the move cannot be ignored. But who deserves protection? What responsibilities should governments and the international community shoulder? How can refugee protection efforts be fine-tuned? What is the price we pay for not coming to the aid of displaced people? And if, as many believe, the number of uprooted continues to grow, how will the protection regime need to evolve?