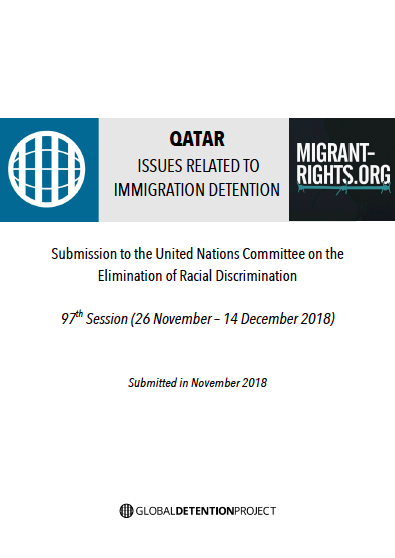 Submission to the UN Committee on the Elimination of Racial Discrimination

Migrant-Rights.org is a GCC-based advocacy platform working to advance the rights of migrant workers. It aims to change perspectives towards migrant workers by improving access to information on migration in the Gulf region and its migration corridors and to promote informed, local discussion on migration issues. Both on and offline, Migrant-Rights.org engages residents, local businesses, and employers to challenge perspectives towards migrants and to improve working conditions for the region’s most vulnerable workers.

The two organisations welcome the opportunity to provide information relevant to the consideration of the Combined seventeenth to twenty-first periodic reports of Qatar to CERD (CERD/C/QAT/17-21, of 22 November 2017, due in 2015)[1] with respect to the implementation of the Convention on the Elimination of All Forms of Racial Discrimination.

This submission concerns issues specifically related to immigration detention, or the detention of foreigners for reasons related to their non-citizen status. Comments and recommendations are made in light of CERD General Recommendations No. 22 (1996) on article 5 of the Convention on refugees and displaced persons, and No. 30 (2004) on discrimination against non-citizens. It is based on GDP research related to immigration detention policies and practices in Qatar and Migrants-Rights.org reports.[2]  It also highlights recommendations made by the Special Rapporteur on the Human Rights of Migrants following his 2013 visit to Qatar.[3]

Foreigners, described as “expatriates” in Qatari immigration law,[4] account for nearly 90 percent of the country’s 2.2 million population. The migrant population surged in 2014, increasing by a record 10 percent, driven largely by labour demand related to the 2022 FIFA World Cup preparations.

Statistical data on non-citizen adults taken into custody, including those who are apprehended for reasons at least in part due to their immigration status, are not available. A report from Qatar’s statistics authority in 2016 claimed that some 23 percent of crimes were immigration and residency related, however it failed to indicate how many people were detained as a result of these crimes.

Central to the challenges facing foreigners in Qatar is the country’s sponsorship system, which ties foreign workers to their employers.[5] The kafala (“sponsorship”) system has been harshly criticised for enabling the exploitation of workers. It is comprised of several laws which include provisions that make migrants vulnerable to exploitation. Leaving often abusive employers (dubbed absconding) makes them irregular and vulnerable to detention /deportation. It is difficult to change jobs due to the No Objection Certificate (NOC) requirements for many workers, which makes it difficult to leave an employer legally. The NOC requirement was purportedly dropped in 2017 but today, the process is effectively still in place and is long and cumbersome. In contrast, employers can terminate a relationship for practically any reason. Once a worker’s residence permit is cancelled, individuals have 90 days to exit or they become illegal (they can also bring the case before the workers’ dispute committee).

The law also specifically provides for immigration detention measures and thousands of people have been detained in recent years, sometimes for periods lasting more than a year.

After years of promises to reform the system, a new law adopted on 4 September 2018 stipulates that migrant workers in Qatar no longer need permission from their employers to leave the country.[6]  However, the law foresees a number of exceptions: “Employers may request that certain named employees – up to 5% of their total employees – obtain their permission before exit. Their request must be pre-approved by the Ministry of Administrative Development and Social Affairs (MADSLA).”[7] The law only covers migrant workers under labour law, leaving some 200,000 domestic workers still requiring permission from their employers to leave the country as their status remains outside labour law.[8]

According to provisions in the new law, expatriate workers not allowed to exit the country for any reason can approach the Expatriate Exit Grievances Committee which shall decide on the grievance within three working days.[9] However, according to a report by the U.S. Department of State, out of 2,958 cases received by the Committee during the first nine months of 2017, “all but two were ruled in the employee’s favor.”[10]

According to Section 28 of Act No. 21 of October 2015 which regulates the entry and exit of expatriates and their residence, a non-citizen against whom a judicial judgment on his/her deportation or repatriation was issued can be “placed” in “the place specified for this purpose for thirty days which is renewable for another period of similar duration.”

Section 28 also “impose[s] on the expatriate to reside in a specific place for two weeks, which could be renewed.”  However, Section 38 foresees “maximum imprisonment of up to three years” and/or a fine for breaching some of Article 28’s provisions. For either judicial or administrative deportation, individuals are expected to finance the cost of their return airfare. Prison authorities will arrange for airfare if they can’t afford it, but this can take an undetermined amount of time.

According to the U.S. State Department’s 2017 Report, Qatar’s government limited detention to two months for all detainees in the Deportation Detention Centre (DDC), except those facing additional financial criminal charges. The processing time for deportations ranged from two days to 10 months. There were reports that authorities delayed deportations in cases where detainees had to resolve financial delinquencies before they departed the country. According to the National Human Rights Committee (NHRC) many expatriates are detained for defaulting on bank loans / bounced checks, which the NHRC points out is in violation of international standards.

One aspect of Qatar’s immigration detention regime about which we do have unambiguous reports concerns pregnant women and their children. The Secretariat of the UN Special Rapporteur on the Human Rights of Migrants informed the GDP that migrant women who become pregnant outside of marriage are placed in a form of detention or imprisonment during and after their pregnancies because extra-marital relationships are criminalised. Some of the women are reportedly detained with their children at Qatar’s dedicated immigration detention facility after they give birth to await deportation.[11]

Commenting on the detention of children and pregnant women in Qatar, the UN Special Rapporteur said in his report: “There were several pregnant women in the deportation centre during the visit of the Special Rapporteur. The Special Rapporteur deeply regrets this practice. The authorities should either facilitate their return to their countries, or house them in shelters. Similarly, children should never find themselves in detention: migrant women with children should always be hosted in shelters. While there were no children in the deportation centre during his visit, the Special Rapporteur was informed by several sources that women with small children are routinely kept in the deportation centre and he was told that approximately 10 women with children had been removed from the centre the day preceding his visit.”  According to 2018 reports, such cases of “zina” law often include women who have been abused and raped. (Islamic legal tradition treats any sexual contact outside a legal marriage as a crime: “zina” is deﬁned as any act of illicit sexual intercourse between a man and woman.)[12]

The Special Rapporteur also observed that “a large number of detainees” wished to return to their home countries and thus there was little risk of their absconding from removal proceedings. In these cases, he concluded, “detention is not necessary and thus a violation of that person’s rights.” In his report, the rapporteur recommended “Qatari authorities to systematically rely on non-custodial measures rather than detention. An individual assessment of the necessity of detention should be undertaken in all cases, in accordance with international human rights standards, and non-custodial measures should always be considered before detention.”

There are reports of other inadequate conditions in detention. According to a 2015 report by the National Human Rights Commission of Qatar “overcrowding also creates a hostile and tense atmosphere among the detainees, according to testimonies from a group of workers who were released after being detained in the prison.”[13] In its 2017 report, the U.S. State Department noted that in January of that year, the government expanded the capacity of the deportation centre for women to host up to 250 inmates, and provided additional access to health care, food, and recreational facilities.

In 2016, the commission’s annual report noted the prolonged detention of individuals in the deportation centre. The Ministry of Interior stated prolonged detention was due to illegal entry /lack of travel documents. However, migrant workers often lack travel documents because the employer has confiscated them. Other sources also report a lack of legal aid and translators in detention centres and denounce the detention of persons forced into irregularity due to provisions in kafala.  This makes conditions even more difficult for detainees from countries that do not have consular representations in Qatar. In 2017, the U.S. State Department reported that conditions in the Deportation Detention Centre did not generally meet international standards, that “no statute allows ombudsmen to advocate for prisoners and detainees.”

[1] Committee on the Elimination of Racial Discrimination, “Combined Seventeenth to Twenty-First Periodic Reports Submitted by Qatar under Article 9 of the Convention, due in 2015*, CERD/C/QAT/17-21,” 22 November 2017, CERD/C/QAT/17-21, https://bit.ly/2JswJdH

[5] Law No. 4 of 2009 Regulating the Entry and Exit of Expatriates in Qatar and their Residence and Sponsorship.

[12] A. P. Santos,  “Where Pregnancy Is a Prison Sentence,” Pulitzer Center, 16 January 2018, https://pulitzercenter.org/reporting/where-pregnancy-prison-sentence

[13] National Human Rights Committee, “Report of the NHRC on the Situation of Human Rights in the State of Qatar and the Committee’s Activities during the Year 2014,” https://bit.ly/2qqVRsE