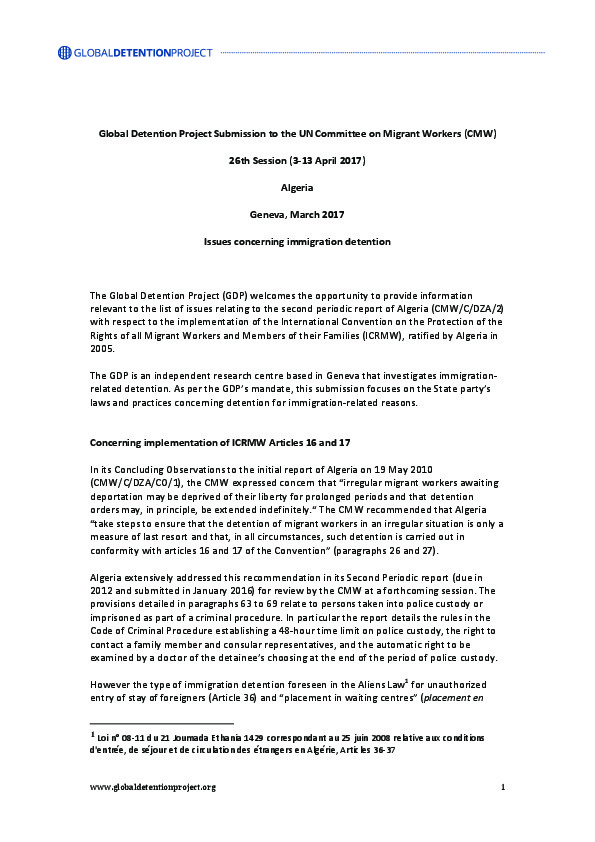 The Global Detention Project (GDP) welcomes the opportunity to provide information relevant to the list of issues relating to the second periodic report of Algeria (CMW/C/DZA/2) with respect to the implementation of the International Convention on the Protection of the Rights of all Migrant Workers and Members of their Families (ICRMW), ratified by Algeria in 2005.

Concerning implementation of ICRMW Articles 16 and 17

In its Concluding Observations to the initial report of Algeria on 19 May 2010 (CMW/C/DZA/CO/1), the CMW expressed concern that “irregular migrant workers awaiting deportation may be deprived of their liberty for prolonged periods and that detention orders may, in principle, be extended indefinitely.“ The CMW recommended that Algeria “take steps to ensure that the detention of migrant workers in an irregular situation is only a measure of last resort and that, in all circumstances, such detention is carried out in conformity with articles 16 and 17 of the Convention” (paragraphs 26 and 27).

Algeria extensively addressed this recommendation in its Second Periodic report (due in 2012 and submitted in January 2016) for review by the CMW at a forthcoming session. The provisions detailed in paragraphs 63 to 69 relate to persons taken into police custody or imprisoned as part of a criminal procedure. In particular the report details the rules in the Code of Criminal Procedure establishing a 48-hour time limit on police custody, the right to contact a family member and consular representatives, and the automatic right to be examined by a doctor of the detainee’s choosing at the end of the period of police custody.

However the type of immigration detention foreseen in the Aliens Law[1] for unauthorized entry of stay of foreigners (Article 36) and “placement in waiting centres” (placement en centres d’attente) as per Article 37 appears to be different from criminal detention. According to those provisions it seems that a form of administrative detention can be ordered by the local authorities (wali) for a maximum of 30 days, renewable, pending “escort back to the border or repatriation to the country of origin.”

How are provisions in Aliens Law Article 37 applied in practice? What are the “waiting centres”? Where are they located and, who operates them, and which institution has authority over them? Can people accommodated in these centres freely leave the centre of their own volition or are they deprived of their liberty? What is the legal limit for stay in those centres and how long do foreigners remain in those centres on average?

However, in early December 2016, various sources inside and outside Algeria reported on the rounding up and arrest of between 1,400 – 1,500 sub-Saharan African migrants and refugees by security forces around Algiers.[2] They were forcibly transported to the city of Tamanrasset, 2,000 km south of the capital and 400km to the Niger border, on the trans-Saharan Highway to Agadez. Eye witnesses report that migrants, including children, who refused to board buses were beaten.[3] According to the US. State Department nearly 1,000 of them were removed to Niger.[4] NGOs reported that the summary deportations of migrants also included some registered refugees and asylum seekers and that hundreds of migrants were first bused to a facility in Zeralda 35km west of Algiers, including pregnant women and children. According to persons held there, a hundred persons reportedly slept on the floor and the gendarmes took their belongings and did not return them.[5] The Algerian League for Human Rights denounced the mass arrests and arbitrary and violent detention.[6]

Article 59 of the Algerian Constitution sanctions arbitrary arrests.[7] What safeguards are in place against arbitrary arrest, and detention of Sub-Saharan migrants? Do any of the Sub-Saharan migrants and refugees rounded up in December 2016 remain in detention and if so where are they detained? Are foreign workers in an irregular situation from China, Turkey and Egypt, who are referred to in the Second Periodic report, also subject to arrest and deportation?

According to Médecins du Monde tens of thousands of migrants in transit make it to the Algerian coasts, where they often are forced to wait for years for an opportunity to cross to Europe.[8] Under Algerian law, nationals as well as foreigners travelling to and from Libya who attempt to cross the Mediterranean can be sanctioned for “illicit” exit from Algeria.[9] According to the CMW irregular entry or exit should not be criminalized.[10]

[10] CMW, General Comment No. 2 on the Rights of Migrant Workers in an Irregular Situation and Members of their Families, 2013, http://www2.ohchr.org/english/bodies/cmw/cmw_migrant_domestic_workers.htm