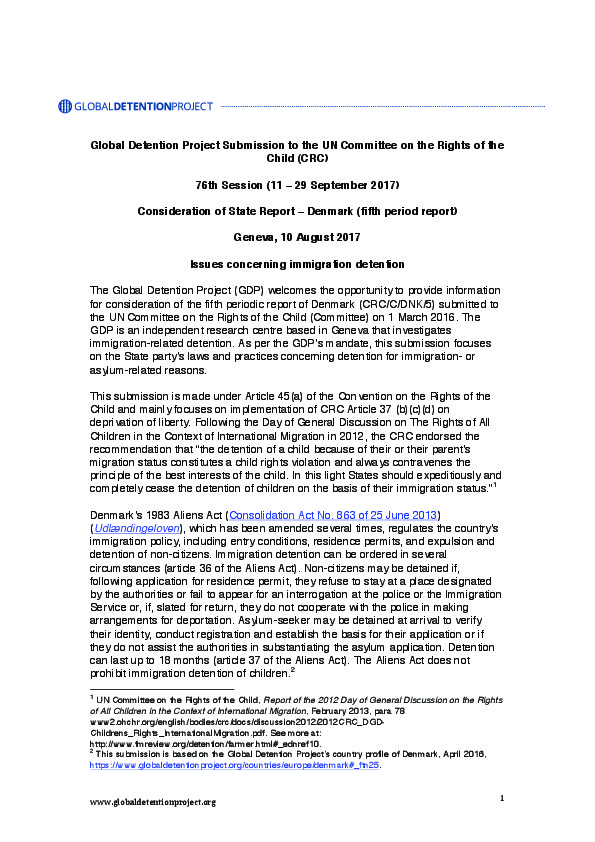 The Global Detention Project (GDP) welcomes the opportunity to provide information for consideration of the fifth periodic report of Denmark (CRC/C/DNK/5) submitted to the UN Committee on the Rights of the Child (Committee) on 1 March 2016. The GDP is an independent research centre based in Geneva that investigates immigration-related detention. As per the GDP’s mandate, this submission focuses on the State party’s laws and practices concerning detention for immigration- or asylum-related reasons.

This submission is made under Article 45(a) of the Convention on the Rights of the Child and mainly focuses on implementation of CRC Article 37 (b)(c)(d) on deprivation of liberty. Following the Day of General Discussion on The Rights of All Children in the Context of International Migration in 2012, the CRC endorsed the recommendation that “the detention of a child because of their or their parent’s migration status constitutes a child rights violation and always contravenes the principle of the best interests of the child. In this light States should expeditiously and completely cease the detention of children on the basis of their immigration status.”[1]

Denmark’s 1983 Aliens Act (Consolidation Act No. 863 of 25 June 2013) (Udlændingeloven), which has been amended several times, regulates the country’s immigration policy, including entry conditions, residence permits, and expulsion and detention of non-citizens. Immigration detention can be ordered in several circumstances (article 36 of the Aliens Act). Non-citizens may be detained if, following application for residence permit, they refuse to stay at a place designated by the authorities or fail to appear for an interrogation at the police or the Immigration Service or, if, slated for return, they do not cooperate with the police in making arrangements for deportation. Asylum-seeker may be detained at arrival to verify their identity, conduct registration and establish the basis for their application or if they do not assist the authorities in substantiating the asylum application. Detention can last up to 18 months (article 37 of the Aliens Act). The Aliens Act does not prohibit immigration detention of children.[2]

Denmark’s immigration detention policies and practices have attracted criticism from various human rights monitoring bodies. Most recently, the UN Human Rights Committee urged the country to ensure that the detention of migrants and asylum seekers is reasonable, necessary and proportionate in the light of the circumstances and that alternatives to detention are used in practice; consider reducing the length of pre-removal and asylum detention and improve the detention conditions, in particular at the detention facility of Vridsløselill; and repeal the 2015 amendment to the Aliens Act in order to ensure that, in all cases, immigration detainees have full access to fundamental legal safeguards, including judicial review of the legality of their detention.[3]

Key Questions and Concerns Regarding the Immigration Detention of Children

In the annex to its fifth periodic report to the CRC (p. 61-62), Denmark provides statistics about children deprived of their liberty for a variety of reasons. However, these figures do not include children placed in detention for immigration-related reasons.

Question: How many accompanied and unaccompanied children were placed in immigration detention in 2014, 2015, and 2016?

Question: What measures are used to ensure that these children, as well as children in return proceedings, are not placed in immigration detention?

Children can be detained at the Ellebaek facility with their parents in a special unit for families. Following its visit to the facility in 2014, the European Committee for the Prevention of Torture and Inhuman or Degrading Treatment or Punishment (CPT) noted that it did not consider the Ellebaek facility a suitable location to hold children because it did not provide an appropriate environment nor did it offer the necessary support that a child requires. It therefore urged the country to end the detention of children at the Ellebaek centre.[4]

Questions: Does the country continue detaining children with their parents in the Ellebaek facility? Are unaccompanied children also detained there? What arrangements are put in place to ensure that their best interests are taken into account? If children are not detained, where are they placed?

[1] UN Committee on the Rights of the Child, Report of the 2012 Day of General Discussion on the Rights of All Children in the Context of International Migration, February 2013, para 78 www2.ohchr.org/english/bodies/crc/docs/discussion2012/2012CRC_DGD-Childrens_Rights_InternationalMigration.pdf. See more at: http://www.fmreview.org/detention/farmer.html#_ednref10.

[2] This submission is based on the Global Detention Project’s country profile of Denmark, April 2016, https://www.globaldetentionproject.org/countries/europe/denmark#_ftn25.