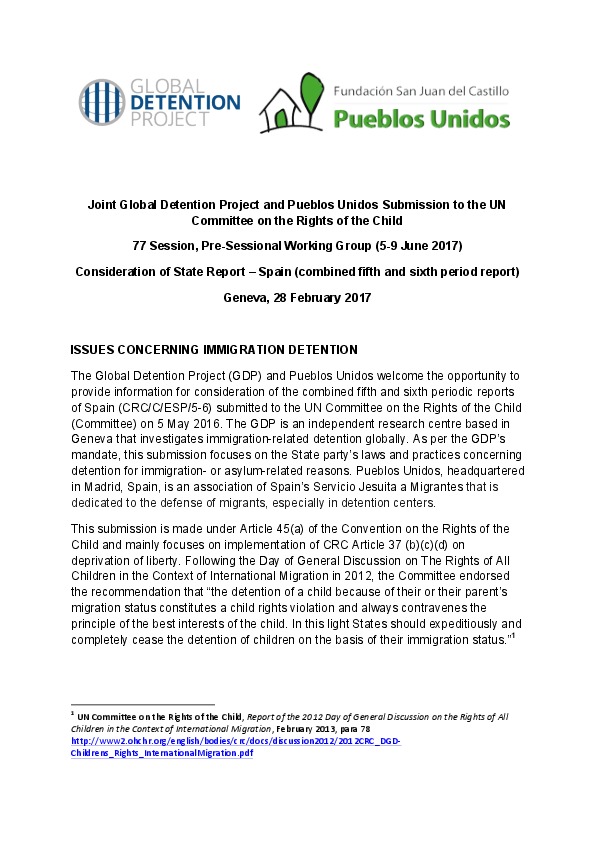 The Global Detention Project (GDP) and Pueblos Unidos welcome the opportunity to provide information for consideration of the combined fifth and sixth periodic reports of Spain (CRC/C/ESP/5-6) submitted to the UN Committee on the Rights of the Child (Committee) on 5 May 2016. The GDP is an independent research centre based in Geneva that investigates immigration-related detention globally. As per the GDP’s mandate, this submission focuses on the State party’s laws and practices concerning detention for immigration- or asylum-related reasons. Pueblos Unidos, headquartered in Madrid, Spain, is an association of Spain’s Servicio Jesuita a Migrantes that is dedicated to the defense of migrants, especially in detention centers.

This submission is made under Article 45(a) of the Convention on the Rights of the Child and mainly focuses on implementation of CRC Article 37 (b)(c)(d) on deprivation of liberty. Following the Day of General Discussion on The Rights of All Children in the Context of International Migration in 2012, the Committee endorsed the recommendation that “the detention of a child because of their or their parent’s migration status constitutes a child rights violation and always contravenes the principle of the best interests of the child. In this light States should expeditiously and completely cease the detention of children on the basis of their immigration status.”[1]

Legal norms relevant to immigration-related detention in Spain are mainly provided in Organic Law 4/2000 of 11 January, on the rights and liberties of foreign persons in Spain and their social integration, as amended by Organic Law 2/2009 of 11 December (Aliens Act or LOEX). Royal Decree 162/2014, of 14 March, approving the operating regulation and internal regime of immigration detention centres (“Centros de Internamiento de Extranjeros” or “CIEs”) provides for specialized care for vulnerable people: minors, disabled persons, the elderly, pregnant women, single parents with minors, and survivors of torture, rape or other serious forms of psychological, physical or sexual violence (Article 1.4). Circular 6/2014 in particular addresses the situation of vulnerability as a circumstance that should be taken into account when deciding on detention. Article 62.4 of the Aliens Act states that children should not be placed in immigration detention.

However, Article 62 bis indirectly provides for the detention of minors as it recognizes the right of detainees to “be accompanied by their minor children, provided that the Public Prosecutor gives his agreement to this measure and that the centre includes units that ensure family unity and privacy (Aliens Act Article 62 bis.1.i and Royal Decree 162/2014 Article 16.2.k). Although the CIEs Regulation does not explicitly make provisions for the detention of families, Article 57—which deals with disciplinary measures including physical separation from other detainees—seems to imply that mothers with their children can be detained (Article 57(6 (a-d)). In 2015 the Supreme Court revoked Articles 7.3 and 16.2 (k) of the Regulation of Organic law 4/2000 for failing to comply with EU directive 2008/115 on returns, according to which states must provide separate family spaces in CIEs for the detention of minors with their parents.[2]

However according to the Interior Ministry, 19 children were placed in detention in 2015. Although the ministry did not stipulate whether they were accompanied, a report by SJM appears to indicate that they were unaccompanied.[3]

Age determination processes. The Framework Protocol for Unaccompanied Foreign Minors (UAMs)—adopted on 22 July 2014 as an inter-ministerial agreement—establishes the bases for institutional and administrative coordination with regards to actions in relation to unaccompanied foreign minors. The Protocol sets some guidelines on locating and identifying minors, determining their age, and placing them under the care of the social services.[4] However, the Framework Protocol does not have normative status under Spanish law and generally promotes testing for age determination irrespective of the fact that the minor is documented. The UN Human Rights Committee has welcomed the adoption of the Protocol but has expressed concern about the methods used in the practice for determining the age of children.[5] Practices of age assessment – provided by Article 35.3 of the Aliens Act – have been under discussion and several cases of non-identified minors in detention have been reported.[6] For example, the radiological test employed in CIE Algeciras has been highly criticized.[7]

Criteria for age-determination. The Supreme Court[8] established a precedent saying that minors with identity documents should not be subject to age assessment process,[9] adding that age assessment process could proceed only if there are reasons to consider that the documents they exhibit is not reliable.[10] However, in 2014 civil society groups, citing 40 cases, denounced that the Public Prosecutor systematically challenged the validity of passports and birth certificates of unaccompanied minors from Morocco and Sub-Saharan Africa.[11] This practice violates both bilateral agreements signed by Spain with other countries,[12] as well as domestic Spanish legislation, since Article 35.3 of the Aliens Act only provides for the testing of the age of undocumented youth when minority cannot be safely established. This seems to contradict information in the Combined Fifth and Sixth Periodic Report of Spain according to which in doubt, preference is given to declaring children minors of age. In February 2016, the Regional Representative for Europe of the High Commissioner for Human Rights stated that the Spanish authorities kept challenging unaccompanied minors’ age and argued that the Framework Protocol seemed “to contain instructions contrary to the doctrine of Human Rights, the majority opinion of European judges and judgments of the Supreme Court.”[13]

Bearing in mind information provided by Spain to the Combined Fifth and Sixth Periodic Report, provide specific information on criteria used to identify and challenge the age of migrant and asylum seeking children who are documented or for whom consular authorities have supplied documentation.[14] On what basis do relevant Spanish officials decide not to accept passports and birth certificates? Which authority makes the decision? Is there an appeals procedure to challenge their decision?

Accommodation/sheltering/detention during age-determination process. As a general rule, unaccompanied minors are to be transferred to a child protection center while performing such tests. However, there are worrying situations especially in the coastal areas where irregular access to Spanish territory frequently occurs. There have been cases of minors held in police stations during the age determination tests. Tests are also performed on youth detained in Foreigners Detention Centres (CIEs), who remain in detention until their minority is effectively determined.

Procedural safeguards. The age-determination process falls short of good practice. The nature and consequences of the procedure of determining age are clearly not taken into consideration. In practice, the youth signs a document consenting to medical tests without being fully informed about the procedure and its legal repercussions. This procedure has three very important characteristics that do not guarantee the effective protection of the rights of the possible minor. First, there is no provision or assistance provided by counsel, which greatly limits the possibilities of defense of the minor. Secondly, the age-determination decision is adopted by the Public Prosecutor, which is not an organ of a jurisdictional nature there is no judicial pronouncement on the minority or the majority of the youth. In addition, in many cases, the Prosecutor does not have visual contact with the minor. Thirdly, it should be noted that the Public Prosecutor’s decision is irreversible which deprives the minor of the possibility to challenge the decision before a court.

To what extent are young people subject to age-determination processes informed of the procedure and its potential consequences? Is their consent requested prior to being submitted to age-determination processes? By whom and in what language? Are they assisted by legal counsel? If not why? Indicate which norm of law justifies that the Public Prosecutor’s decision cannot be appealed?

[1] UN Committee on the Rights of the Child, Report of the 2012 Day of General Discussion on the Rights of All Children in the Context of International Migration, February 2013, para 78 http://www2.ohchr.org/english/bodies/crc/docs/discussion2012/2012CRC_DGD-Childrens_Rights_InternationalMigration.pdf

[12] For iinstance, the Agreement on Judicial Cooperation in Civil, Commercial and Administrative Matters between the Kingdom of Spain and the Kingdom of Morocco, signed in Madrid on 30 May 1997:https://www.boe.es/boe/dias/1997/06/25/pdfs/A19583-19587.pdf