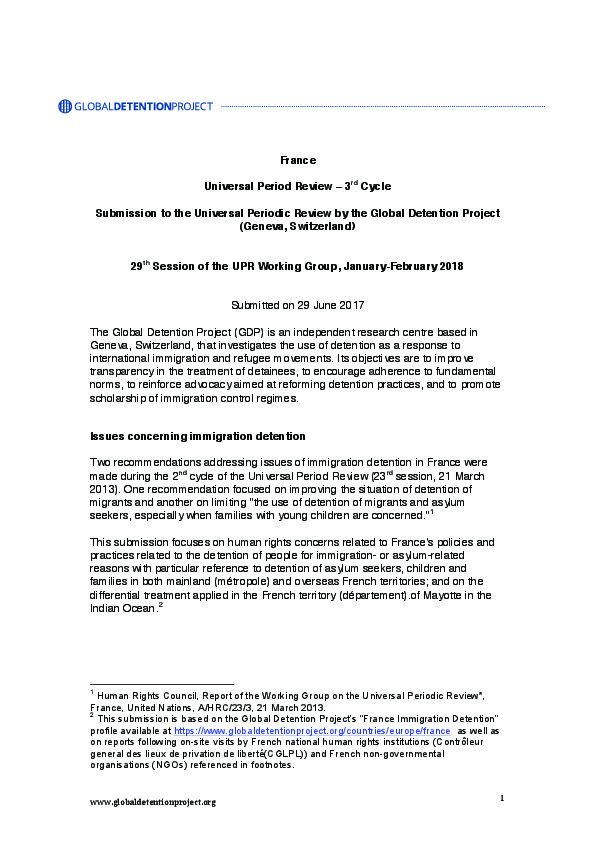 Submission to the Universal Periodic Review by the Global Detention Project (Geneva, Switzerland)

The Global Detention Project (GDP) is an independent research centre based in Geneva, Switzerland, that investigates the use of detention as a response to international immigration and refugee movements. Its objectives are to improve transparency in the treatment of detainees, to encourage adherence to fundamental norms, to reinforce advocacy aimed at reforming detention practices, and to promote scholarship of immigration control regimes.

This submission focuses on human rights concerns related to France’s policies and practices related to the detention of people for immigration- or asylum-related reasons with particular reference to detention of asylum seekers, children and families in both mainland (métropole) and overseas French territories; and on the differential treatment applied in the French territory (département).of Mayotte in the Indian Ocean.[2]

France has one of Europe’s oldest administrative immigration detention regimes. With nearly 50,000 people placed in immigration detention annually, France is the European Union (EU) country that detains the highest number of foreign nationals, far more than other Member State. By comparison, the United Kingdom detains approximately 30,000 people annually and Germany less than 5,000.

France’s immigration detention regime has other characteristics that distinguish it from its neighbours. First while under European Union law member states can detain unauthorized migrants for up to 18 months[3] French immigration law known as CESEDA limits such administrative detention to a maximum of 45 days.[4] A fundamental principle in the law is that foreigners can only be placed or kept in custody for the time strictly necessary for their return (CESEDA Article L. 554-1).[5] According to non-governmental sources, immigration detainees actually spent an average of 12.7 days in detention in metropolitan France (and around two days in French overseas territories) in 2016.[6]

Secondly, CESEDA provides for NGO access in the detention facilities. Five NGOs were accredited for five years in 2014 by the Interior Ministry to provide for legal aid and social assistance to foreigners detained. Budgeted by the government, the five NGOs allowed to operate in the detention facilities in France: La Cimade, France Terre d’Asile, Ordre de Malte, Forum Réfugiés and Assfam were joined in 2016 by Solidarité Mayotte. They publish an authoritative annual report on detention laws, statistics and practices in France at the national level with detailed analyses on each detention facility (centres de rétention administrative).

Also, French immigration law provides specific legal status of Mayotte. The French Constitution authorizes important derogations in exonerating local authorities from implementing legal safeguards in this Indian Ocean island in terms of immigration law. This explains the record number of administrative detainees and removal orders carried out on the island and the very short time span spent in detention before detainees can challenge detention before a court prior to deportation.

The legal framework governing immigration detention in France is comprised of several laws and reforms, starting with the French Constitution, Article 66 – “No one shall be arbitrarily detained”.

Immigration has been central to French politics for over thirty decades and according to a report commissioned by the French Senate 26 immigration laws were adopted between 1980 and 2015.[7] Since then various amendments were adopted in 2016 and early 2017. The Code of Entry and Residence of Foreigners and of the Right to Asylum (CESEDA), is the current legislative act relevant to asylum procedures, reception conditions and detention.

Moreover, the specific legal status of Mayotte deprives foreigners from recognized rights in Metropolitan France. Mayotte became a Department and Region Overseas (DROM) in 2011 so that the CESEDA should be applied in Mayotte as of May 26, 2014. However, a period of four years (until 2018) was given to the island in order to align its policy on the CESEDA during which Mayotte’s authorities can apply detention including of children and families and order massive deportations of foreigners. As Mayotte also ceased to be an overseas territory in 2011, it became one of the European Union’s outermost regions and bound by relevant EU law and Council of Europe norms in terms of immigration detention.

French civil society organisations involved in monitoring immigration detention in France recorded a high number of detainees fleeing situations of war, violent conflict or brittle rule of law in 2016 although there was no prospect of returning them to those countries. For instance 159 Syrians and 158 Eritreans were placed in detention. There were instances of persons placed in immigration detention immediately after they took steps to deposit an asylum claim at the local authorities (préfectures).[8]

Despite commitments by the (previous Hollande) French government to cease immigration detention of children, 2016 was a record year in terms of detention of children. In metropolitan France 182 children were placed in administrative detention and 4,285 in Mayotte. On the Island children were often artificially linked to unrelated adults and at times even deported while their parents actually remained on the Mayotte island in contravention to recommendations by the French Conseil d’Etat (the highest administrative jurisdiction in France).

Key priorities for France with regards to immigration detention:

[3] European Parliament and the Council of European Union, Directive 2008/115/EC of 16 December 2008 on “Common standards and procedures in Member States for returning illegally staying third-country nationals”, available on: http://eur-lex.europa.eu/LexUriServ/LexUriServ.do?uri=OJ:L:2008:348:0098:0107:EN:PDF